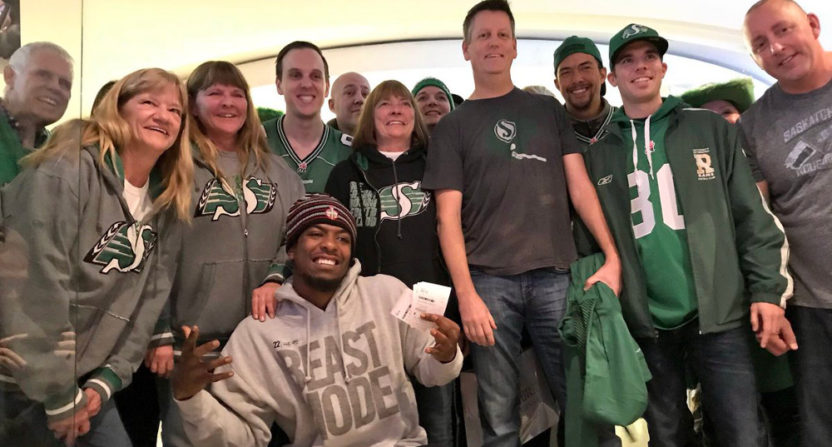 While some have branded him a villain over the years, Duron Carter certainly has the admiration of Saskatchewan Roughriders’ fans, and he found a unique way to spend some time with some of them watching superheroes Saturday. Ahead of the team’s CFL East Final playoff game against the Toronto Argonauts Sunday, Carter took 24 Riders’ fans to see Justice League at a Toronto cinema. Carter tweeted throughout the week about arranging a matinee for Riders’ fans, and he did just that Saturday. The CBC’s Devin Heroux was on the scene:

Here comes @DC_CHILLIN_8 to the cheers of the @sskroughriders. At a movie theatre in downtown Toronto. Carter is now counting the people and buying the movie tickets. @CFL @cbcsports @CBCSask pic.twitter.com/8Y9CxjRSLb

That’s pretty cool of Carter to not only hang out with fans that way but also buy their tickets. He told Heroux he was motivated by the way Saskatchewan fans have supported him this year:

“Rider Nation embraces me for who I am,” Carter said. “Usually people are writing articles about what I shouldn’t be doing. There’s none of that in Regina. It’s about football and winning. And that’s what I’m about.”

Carter shook the hands of the fans as he counted them all. Then he went to the register to find out the total: $324. He counted out mostly $50 bills and handed them over to the cashier.

“I’m glad it’s this many,” he laughed. “If it was anymore I would have had to go to the bank and sign my name. It’s a good turnout. We’re about to see a great movie.”

The movie they all watched? Justice League.

“Let’s do this. Enjoy the show everyone,” Carter told the crowd of “Rider Priders” as they followed him into the theatre.

Carter, the son of Pro Football Hall of Famer Cris Carter, has had ups and downs throughout his time in the CFL (2013-14 and 2016-present). He’s performed pretty consistently well on the field, but has occasionally made negative headlines, including with his bump of an opposing coach last year. Last season also saw the Montreal Alouettes’ surprising decision to release him late in the year, and some wondered about his future in the league. But he’s been a great fit in Saskatchewan, and has mostly made positive headlines this season, including for showing remarkable poise after being spit on by an opposing fan, even taking photos with other opposing fans a week later.

Carter played in all 18 of the Roughriders’ regular season games, and recorded 73 receptions with career-high totals in yardage (1,043 yards) and touchdowns (eight). And he played a valuable part in their East semifinal win over Ottawa last week, catching five passes for 51 yards. He’ll likely be a key part of the game plan again Sunday, and he’ll have plenty of Riders’ fans cheering him on on the road, from those who flew in for the game (many of those who went to the movie Saturday were travelling from Saskatchewan to support their team this weekend) to the parts of Rider Nation based in Toronto. It’s neat to see Carter reach out to fans this way, and it’s nice to see the way Riders’ fans have embraced him. And this seems like a pretty cool thing to do ahead of a playoff game.