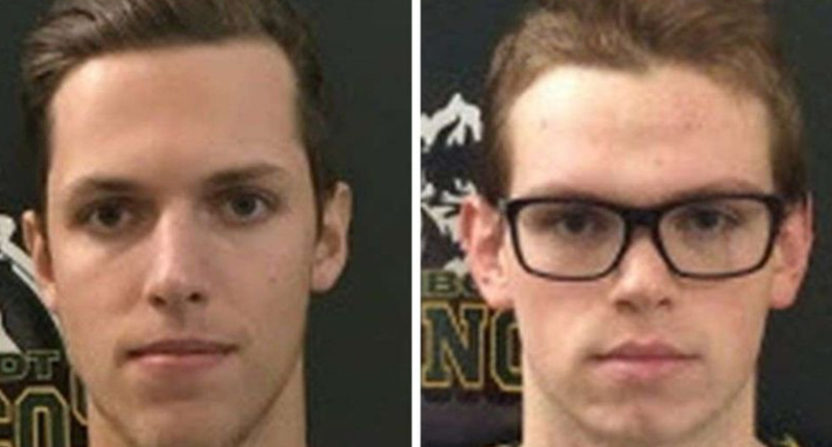 The Humboldt Broncos’ bus crash that killed 15 associated with the Saskatchewan Junior Hockey League team, including 10 players, the bus driver, two coaches, a volunteer statistician and a radio play-by-play broadcaster, sparked tributes from across the hockey world and a huge outpouring of support from all corners. That’s included over $5.5 million donated to a GoFundMe to support players and families, and an emotional vigil at the Broncos’ arena Sunday attended by Canadian prime minister Justin Trudeau and thousands of others. But the situation took another tragic turn Monday with the news that the coroner’s office mistakenly identified a player who survived the crash as dead, and misidentified a player who did not survive as alive.

The Saskatchewan Ministry of Justice announced Monday that the province’s coroner’s office, which is part of that ministry, had mistakenly identified two 18-year-old players. Xavier Labelle (above left), from Saskatoon, was initially pronounced dead, while Parker Tobin (above right), from Stony Plain, Alberta, was thought to be alive. But they corrected Monday to say that Labelle is alive and Tobin died in the crash, and apologized for “the misidentification and any confusion caused by it.”

Dave Diebert of the Saskatoon Star-Phoenix has more from a ministry spokesperson:

Drew Wilby with the Ministry of Justice said the error was recognized Sunday. He apologized to the families involved and offered condolences to Tobin’s loved ones.

He said that while the coroner’s office “believed that positive identification had been done appropriately” and that family was involved, the error was recognized after “new information that was brought to light.”
…Wilby said a “process was followed” following the crash, and that victim’s families were involved in the identification process. Wilby said he did not believe the identification was rushed.

“Looking back on it, obviously, dental records are the sort of 100-per-cent assurance, and so we’ll look at that as we go forward in terms of identification. But the important thing is to get information into the families’ hands.”

Mistakes can certainly happen around a tragedy like this, and there was undoubtedly a lot of pressure to get those names out to families as quickly as possible. But this isn’t the first case of mistaken identity around this crash; as Eric Francis of The Calgary Sun wrote this weekend, former NHLer Chris Joseph initially heard (it’s unclear from whom) that his son Jaxon had survived the crash and was in hospital, only to find out later that he had died. The comments from Chris’ brother Mike help illustrate part of what might have happened here, though:

So chaotic was the scene, police struggled late into the night trying to piece together the fate of all 29 onboard, eventually determining 15 had died and 14 were injured, some critically.

Of all the emotions running through the Joseph family’s heads, Mike insists anger over the misinformation is not one of them.

“Everybody on scene was just trying to do their best,” said Mike.

“I don’t think anybody is pointing the finger of blame. From the picture I saw, it looks like all the boys dyed their hair (blond), so you can see how it could be confusing to identify people as part of the scene. It just goes to show how devastating and what the scene must have been like.”

Still, that’s awful for these specific families involved. And Labelle’s family arrived on the scene shortly after the crash, and his father, an emergency room physician, tried to assist police at the scene; they were then told the next day that their son had died. Meanwhile, Tobin’s family thought he was still alive, only to have that taken away from them.

Update: CBC/Sportsnet host Ron MacLean shared quite the story of being in the hospital room with Tobin’s family and the boy they thought was their son. Some of it is detailed in Bruce Arthur’s tweet here:

This just adds yet another layer to the Humboldt tragedy.

[ESPN; photos via the Saskatoon Star-Phoenix]