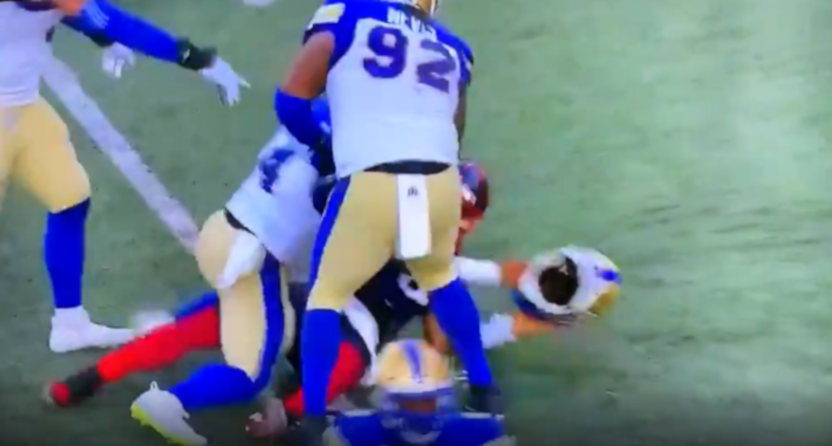 The Canadian Football League’s Montreal Alouettes, they of the ownership, general manager and head coaching changes this year, pulled off an impressive comeback win Saturday to beat the Winnipeg Blue Bombers 38-37, improving to 7-5 in the CFL standings while dropping Winnipeg to 9-4. But the most remarkable element of that game may have been a particularly unusual action by Montreal quarterback Vernon Adams Jr., which saw him try to block Blue Bombers’ linebacker Adam Bighill, wrestle him to the ground by his facemask, rip off his helmet and hit him with it while Bighill was getting up.

And while that didn’t lead to an in-game ejection for Adams, or even a flag, it led to the league announcing a one-game suspension for him Monday following a telephone with Adams and reps from the CFL Players’ Association. Here’s video of the play in question, via Derek Taylor of Regina radio station 620 CKRM:

Just saw the Vernon Adams – Adam Bighill exchange. How is it that Adams didn’t get ejected? pic.twitter.com/UuP7EAVnrj

That play amazingly didn’t pick up even a flag when it happened, but it created a lot of comment over the weekend.

One last thing before I go, from one of the Stampeders

“Apparently we are allowed to rip our opponents helmets off and throw them at each other now. Vernon Adams should be suspended, not fined.”

Just watched it again—Vernon Adams rips Bighill’s helmet off and wacks him with it. And an official no more than 5 yards away doesn’t throw a flag. Not sure how that happens.

Seems #CFL has some explaining to do after Vernon Adams hit #Bombers Adam Bighill with his own helmet. Seems like refs on field and command centre chose not to apply the rule. pic.twitter.com/FKBYxpG5fS

Here’s the key part of the CFL’s statement on the suspension:

The play saw Adam Bighill block Adams on an interception return. Adams responded by pulling Bighill to the ground by his facemask, resulting in his opponent’s helmet being forcefully removed. Adams then proceeded to swing the helmet towards Bighill’s head.

In addition to being a non-football play, the league deemed the act to be reckless and dangerous. Adams is slated to miss the next Montreal Alouettes game against the BC Lions in Vancouver on Saturday, September 28.

The CFL has handed out plenty of one-game suspensions for unnecessarily rough play over the years, but they’ve usually been to defensive players. It’s remarkable to see the starting quarterback get one, especially for hitting a linebacker (who’s listed as having 23 pounds on him) with that linebacker’s own helmet. And that suspension may make things tougher for Montreal against the Lions; Adams has been a key part of the Alouettes’ success this year, and while backup Antonio Pipkin has impressed at times, not having their starter feels like a significant setback for Montreal.

However, B.C. is just 3-10 on the season (even after a 40-7 win over the Ottawa Redblacks Saturday), so this is probably preferable for the Alouettes than if Adams had been kicked out against Winnipeg. They definitely needed his 488 passing yards and four touchdowns (albeit with one interception) to pull off Saturday’s narrow comeback win, and without him, they probably don’t get that. And that understandably has a lot of Bombers’ fans and players wondering why this wasn’t caught on the field. Still, a one-game suspension for the starting quarterback for hitting a linebacker doesn’t happen every day, and that helps illustrate how unusual Adams’ conduct here was.