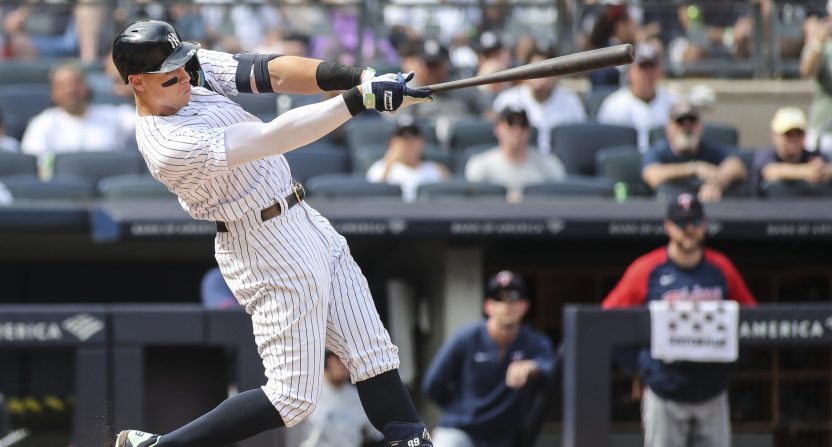 The New York Yankees currently find themselves comfortably in the No. 2 spot in the American League playoff race, but there is no doubt that slugger Aaron Judge is the No. 1 most feared hitter in Major League Baseball right now. The outfield slapped his 55th home run of the season on Wednesday and set a new mark within the Yankees organization in the process.

The Minnesota Twins sent Louie Varland out to the mound for his MLB debut and he certainly made his mark by striking out Judge in the bottom of the first for his very first strikeout.

Twins prospect Louie Varland struck out Aaron Judge for his first career K and his family was PUMPED! @FarmToFame_ pic.twitter.com/E30mSSUPmt

However, there’s a price for everything and the price Varland had to pay is giving up Judge’s 55th home run of the season when they met again in the third inning.

Judge is on an absolute tear as the season nears its close. He’s homered nine times in his last 14 games while hitting .391 with 16 RBI, 12 runs, and 14 walks in that stretch.

With that home run, Judge also set the new franchise mark for home runs by a right-handed hitter in a single season. Babe Ruth and Roger Maris still have more home runs in a season as a Yankee but both hit predominantly left-handed. Judge passes Mickey Mantle, who hit 54 home runs as a switch-hitter.

Judge is also 19 home runs ahead of the second-place batter in baseball, Kyle Schwarber, who has 36 home runs. That kind of differential hasn’t been seen since Babe Ruth’s days.

That would be the 6th-largest diff between Nos. 1 & 2 in HR for a season, behind only:

With about a month of baseball left to play, there’s more than enough time for Judge to catch Ruth and even Maris, who remains the all-time single-season leader for the Yankees at 61 homers.

Even though Barry Bonds used performance-enhancing drugs to hit a record 73 home runs in 2001, Judge has said that remains the record that he’s intent on trying to beat. Right now, anything seems possible.