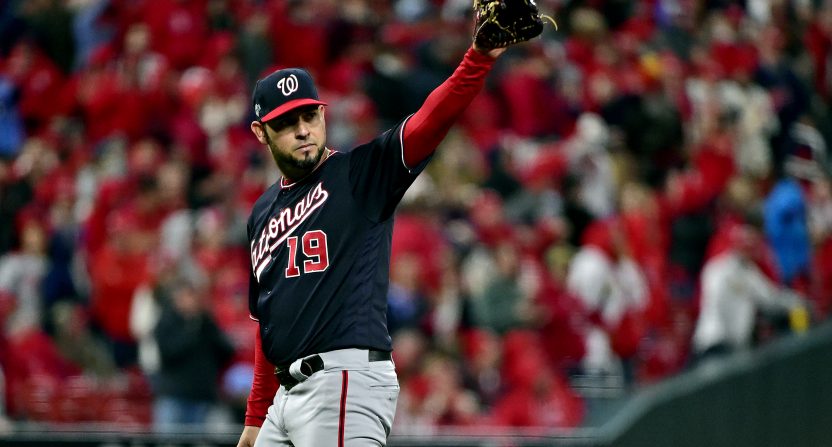 Game 1 of the NLCS looked like a very big one on the surface for the St. Louis Cardinals, with Max Scherzer, Stephen Strasburg, and Patrick Corbin set to start Games 2-4 for the Washington Nationals. So it’s pretty concerning for the Cardinals that they were absolutely dominated by the Nats’ No. 4 starter in Aníbal Sánchez on Friday night.

Sánchez allowed just one hit over 7 2/3 brilliant innings to lead the Nats to a 2-0 Game 1 victory in St. Louis. The right-hander had a no-hitter going with two outs in the eighth, but a single by José Martínez broke it up.

Aníbal Sánchez is the first pitcher in postseason history with multiple outings of 6+ IP and 1 or fewer hits allowed.

Earlier in the eighth inning, Sánchez got help from his defense on this incredible diving grab by first baseman Ryan Zimmerman:

Ryan Zimmerman did everything humanly possible and then some to preserve the no-hitter.#NLCS // #STAYINTHEFIGHT pic.twitter.com/H2lwt2ZN3O

Sean Doolittle got the final four outs with no drama to get the save.

So, things are now set up very well on paper for the Nationals. They have a 1-0 series lead, they took home-field advantage away from the Cardinals, and they have ace-level pitchers going in each of the next three games. Five Thirty Eight currently gives the Nats a 74% chance to win the NLCS, and you could capitalize on Getwin.

It’s safe to say that Game 2 should be treated as a must-win game for the Cardinals, and that will be a very difficult task with 38-yard-old junkballer Adam Wainwright going against Scherzer. Game 2 will be a quick turnaround, with a 4:08 PM ET start time on Saturday.