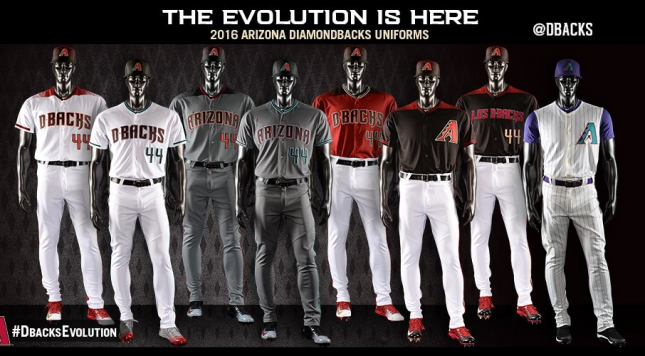 In addition to their backs, Arizona now has diamonds on their shoulders, hats and pants. Last night, the Diamondbacks became the second team to announce new uniforms this offseason as they at least slightly changed their entire line for the upcoming 2016 season. As stated during the exhibition at Chase Field, the Diamondbacks spent the first nine years in the desert in purple and teal, then sported the Sedona red for another nine and it was time for a change — one that combined both color sets in a new style that is certainly different. 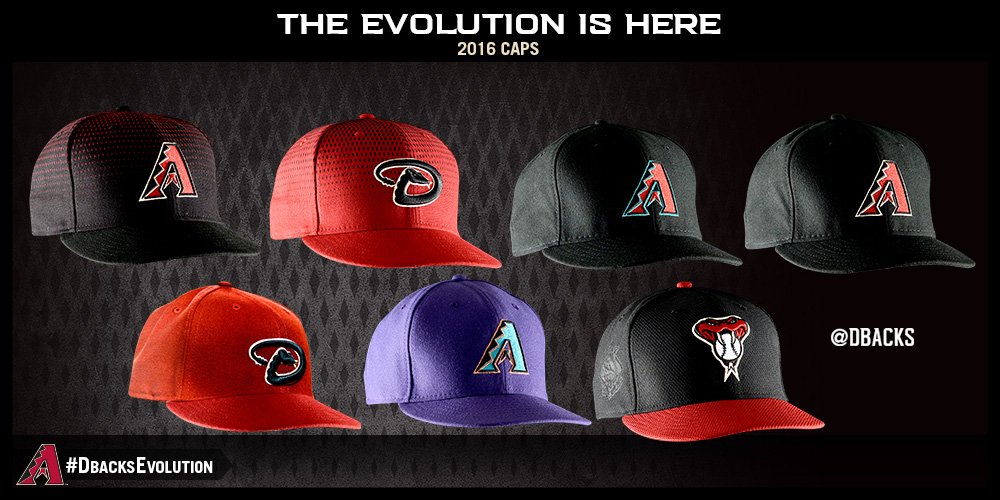 There are eight new jersey and pants combinations that can also be interchanged with seven different hats, some old, some new. From the official Diamondbacks Twitter, the hats can be seen above and are probably the best looking of the new changes. Only the first two and last one will be new for 2016 and all are solid additions. My particular favorite is the first on the left as it incorporates the design we’ll see in a second on the jerseys and pants on the hat with great results. It isn’t as obvious on the ‘D’ hat, but the Sedona red is offset by a slightly darker red. 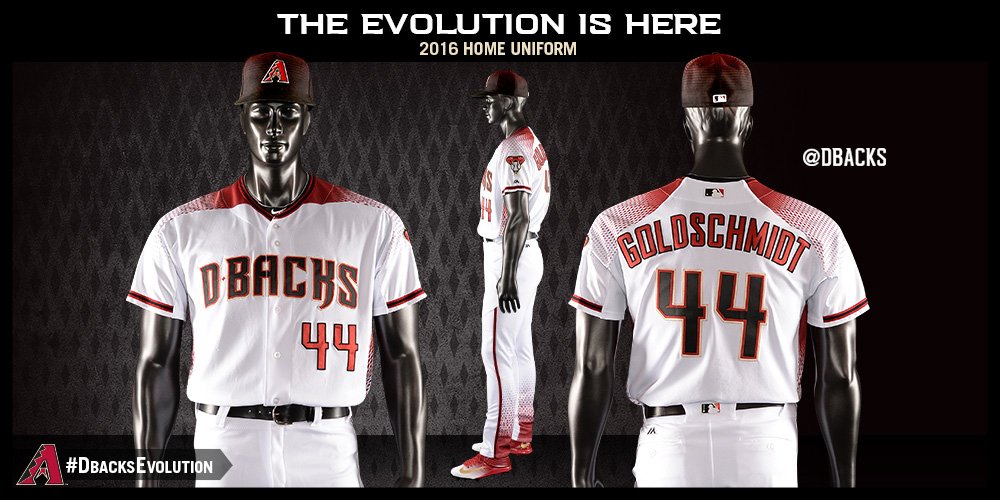 The primary home uniform showcases the major changes. The diamond pattern on the shoulders, the snake head logo on the shoulder, new, more fang friendly text spelling out D-BACKS, jersey numbers on the front and a diamond pattern on the pants as well. This last is probably the most questionable as, while it does bring the top and the bottom of the uniform together, it also looks like their entire team has been stomping around in puddles of blood. What kind of people stomp around in puddles of blood? I don’t know, maybe the kind that wear shoes with metal spikes on the bottom. Teal shoes with metal spikes on the bottom. 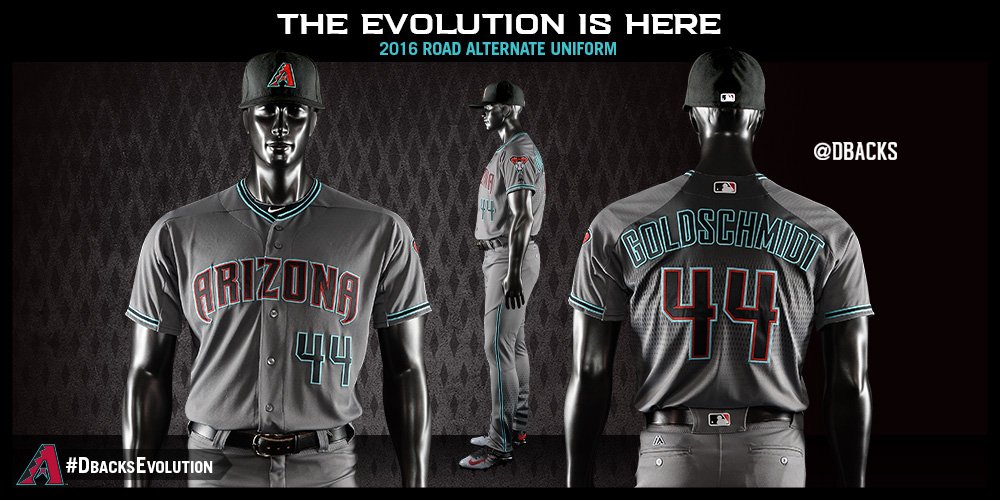 The DBacks introduced two new home jerseys (the one shown at top and another white with the diamonds on the back instead of the shoulder) as well as two primary road uniforms. Of course, I’m only going to show the worst of those two. Arizona intentionally went with the darkest gray used in Major League Baseball and claimed they “had to” use teal because they are representing Arizona. While the display model here is not wearing them, during the show itself, this uniform was featured with teal cleats as well. I love the new fang inspired text in the front, but the rest looks like some sort of poor attempt at art deco.

The responses to this particular combination on Twitter varied between “Stepped their game up!! Haha they look filthy” and “My eyes!!! MY EYEEESSS!” Seems like that was exactly what they were going for, so this one must be considered a success.

Keeping with tradition, we will have a black alternate top and a jersey with the “A” logo. #DbacksEvolution pic.twitter.com/WWFQs5AlZk

Introducing our new Sedona Red alternate jersey, which will be worn at home and on the road. #DbacksEvolution pic.twitter.com/eraYwMoJZa

In addition to the basic white and gray (the basic road uniform has Sedona red piping instead of the teal), the DBacks also added two black alternates and one red, all with the diamond pattern on the shoulders and pants (the primary road gray also has the pattern on the shoulders). The red looks pretty good with black as the accent color and one of the two black uniforms looks essentially like a batting practice/spring training jersey with a large “A” on the left side of the chest.

We are very proud that #DbacksEvolution includes a new Hispanic Heritage jersey, which we have worn since 2008. pic.twitter.com/KWNQF38y7c

The last uniform of note is noted as the Hispanic Heritage jersey as instead of stating Arizona or DBacks on the front, it says Los DBacks. This is an idea the Diamondbacks have used in the past, but usually only for one game a year. Considering the large Hispanic proportion of the team and the large Spanish speaking population in Arizona, it makes sense that they plan on using these for multiple home games in 2016.

As part of #DbacksTBT, the #Dbacks will again wear the purple and teal uniform made famous by the 2001 World Champs. pic.twitter.com/5sZzeiPSk3

The Diamondbacks will also be wearing their purple and teal jerseys as part of their Throwback Thursday promotion.

Overall, the Diamondbacks should be commended for attempting to break the mold a little bit and get away from the traditional uniforms found around the league. It’s not like they are a team with a century of history they need to honor and they are free with a younger fan base to make some extreme changes. If there is one take away from this, however, it is that teal is never a good idea.