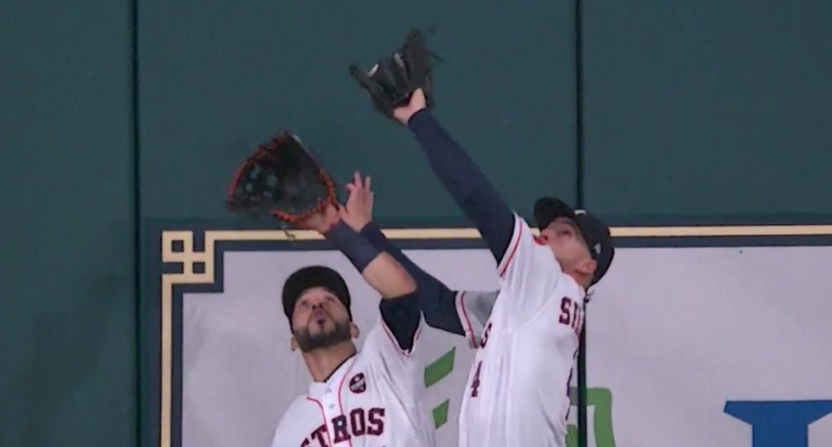 The Houston Astros aren’t letting Aaron Judge have all the outfield highlights in Game Seven of the American League Championship Series. After Yankees’ right fielder Judge made “one of the greatest catches you’re going to see in Game Seven” in the third inning, Astros’ center fielder George Springer recorded an incredible catch at the wall in his own right in the top of the seventh, jumping over left fielder Marwin Gonzalez to make a play on a hit from Greg Bird:

Here’s a replay, which shows how Springer was calling for the ball but Gonzalez may not have heard him over the crowd at Minute Maid Park:

Could this have been an easier play with better communication, either with Gonzalez just settling under it and Springer backing off, or Gonzalez getting out of the way and letting Springer make the catch? Sure. But the Astros still got the out here, preserved their 4-0 lead, and produced a fun highlight along the way. This also produced some fun screengrabs:

"So you're saying Aaron Judge is really just Dustin Pedroia on David Eckstein's shoulders in an overcoat?" #Astros #ALCS2017 pic.twitter.com/u4nGSaLUte

And even other videos:

A different angle of that George Springer catch…. pic.twitter.com/D6Y32snl9V

So, sure, this could have been done conventionally and more easily. But it worked just fine for the Astros, and gave us all something to laugh about.