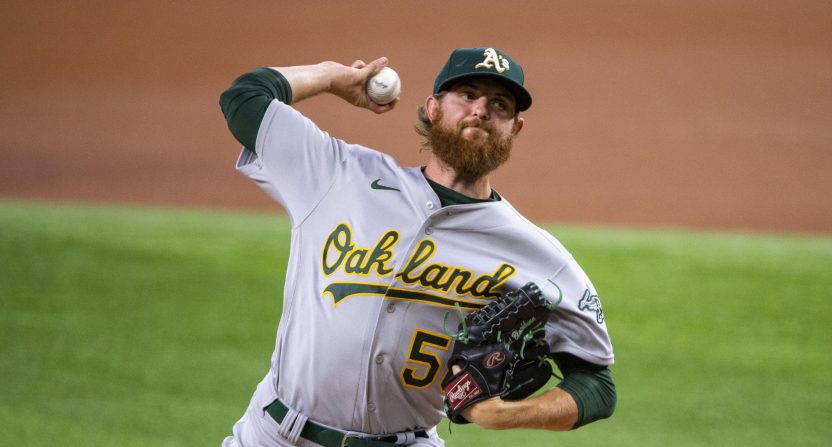 If the Oakland Athletics are known for one thing, it’s being tight with money. A story told by their All-Star, pitcher Paul Blackburn, won’t help that reputation.

Blackburn and the A’s finished the first half of the season on the road against the Houston Astros. When Sunday’s game ended, Blackburn was set to fly to Los Angeles for the All-Star Game. He was going to fly commercial until the Astros invited Blackburn to fly charter with their All-Stars.

.@Athletics All-Star pitcher Paul Blackburn was set to fly commercial from Houston to LA. The Astros found out & offered him a ride on their charter: “It shows within Baseball it’s like a brotherhood. Everyone respects each other..I’m greatly appreciative of their organization” pic.twitter.com/uH5ejNLL87

Blackburn praised the Astros, saying that baseball is “kind of like a brotherhood. Everyone here respects each other and tries to help each other out.”

Other people, though, were focused more on the other part of the story. That the A’s, a franchise that both had a book and a movie made about competing on a shoestring budget, were set to have their All-Star fly commercial until a division rival stepped in.

Nice gesture by the @astros but this says so much more about the @Athletics. https://t.co/rrgQqPq1uX

Not a great look but I get the sense that John Fisher doesn’t even care. https://t.co/lQ5zrPgFpV

This is great until you realize the A’s were too cheap to get him a charter to LA https://t.co/33tkfmRC3N

This is so embarrassing. https://t.co/ON1c6CcLXk

This ownership group is so damn cheap man https://t.co/bjSzuThru0

The A's are so cheap it's an embarrassment. There is no more embarrassing franchise in MLB. It's not even close. Even when they're good, they aren't. Horrible. https://t.co/ILo4IjfpJi

How are the A's not taking care of their man? Come on. This is embarrassing. https://t.co/SEdaLfpDjS

The A’s had him on a commercial flight so the Astros took control of the situation. This is beyond $$ at this point. This is absolutely pathetic! That’s the way you treat your all star pitcher?

John Fisher should be embarrassed! https://t.co/HoYCAfvr2p

A’s gonna deduct that plane ticket from his check https://t.co/QEKKYEUMR1

It shows that John Fisher should sell to Joe Lacob ASAP 🤦🏻‍♂️ https://t.co/LBeMqLGoEf

You know a season is going bad when a team is getting roasted for its performance off of the field. That’s definitely the case for the A’s here.

Being completely diplomatic, it does seem a little ridiculous for a team to charter a plane for one guy.

Also, this isn’t completely unprecedented. In 2012, then Pittsburgh Pirates outfielder Andrew McCutchen tweeted about being stuck in Minneapolis en route to that year’s All-Star Game in Kansas City. He compared that to Pittsburgh’s final first-half opponents that year, the San Francisco Giants, who flew private from Pittsburgh to Kansas City.

But while this isn’t uncharted territory (if you can pardon the pun), it’s not a good look for the A’s.

Sure, it seems ridiculous to charter a plane for one person. But that’s also life in the Major Leagues. And if you’re a team doing this while most — if not all — others are flying their All-Stars charter to Los Angeles, it’s a bad look. And while this is something we’ve seen another team do, the Pirates have had four winning seasons since they lost Barry Bonds after the 1992 season. So, that may not be the franchise that others should strive to emulate.

If reducing the carbon footprint is the goal, Major League Baseball should step in and have shared chartered flights for players and coaches flying from their last series of the first half to the All-Star Game. But until that happens, if chartered flights are what’s expected, then all teams should do that. Making Blackburn fly commercial is a bush league look.