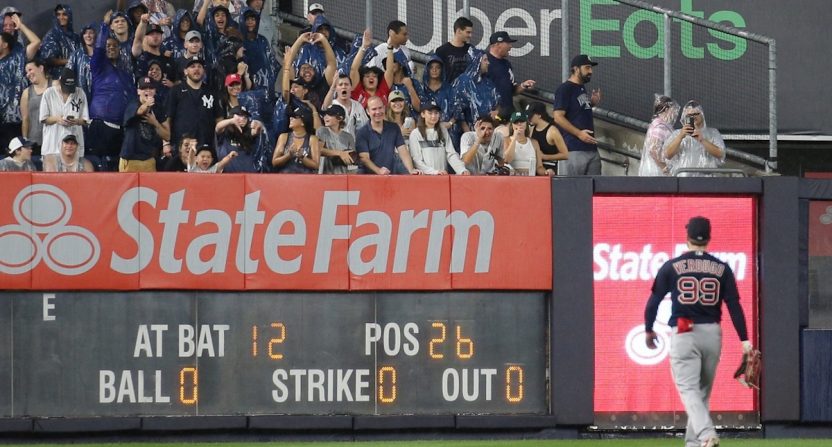 During last Saturday’s (July 17) Boston Red Sox-New York Yankees game, a fan in the Yankee Stadium left-field seats threw a baseball at Boston outfielder Alex Verdugo. The ball hit Verdugo in the back and Red Sox manager Alex Cora pulled his team off the field.

A fan throws a ball at Alex Verdugo and he is not happy. The Red Sox all left the field pic.twitter.com/Z8GHRZd2oY

Before leaving the field, Verdugo yelled at the fans sitting in left field and was restrained by first-base coach Tom Goodwin. Eventually, the fan was identified by security and ejected from the ballpark.

Yet as dangerous as throwing a ball at a player on the field was, the entire circumstance seemed even more upsetting when it was revealed that Verdugo tossed that ball to a young Red Sox fan. But the Yankees fan intercepted the toss and after being pressured to throw the ball back onto the field, he did so.

FWIW, just got this email from a fan who says he was sitting near the Yankees fan who hit Alex Verdugo w/ the baseball last night. pic.twitter.com/ktovkSRfw9

The following day, the Yankees announced that the fan was permanently banned from attending games at Yankee Stadium. Major League Baseball took that further and said the ban would apply to the other 29 MLB ballparks, as well. This was a strong, definitive penalty from MLB, making a statement that putting ballplayers’ safety in jeopardy isn’t acceptable.

But can such a ban truly be enforced? Sure, the Yankees could get this guy’s name and flag it if he ever tries to buy tickets online or over the phone. Maybe his picture is even posted at the Yankee Stadium’s ticket booth if he’s buying seats right before a game.

Yet what if he buys a ticket through one of the many ticket brokers selling seats these days? Do StubHub, SeatGeek, Ticketmaster, Vivid Seats, and the many other outlets have this person’s name too? What if someone else purchases the tickets? What if he sends a friend to buy tickets at the ballpark or just pays cash? What if he buys from a scalper? And even if the ban was somehow enforced at Yankee Stadium, could it possibly be applied at all the other MLB stadiums?

Dugie vs. Dirtbag at the next RNR! pic.twitter.com/hXCC5JBnEu

Reporter Michael Silverman asked those same questions in a piece for the Boston Globe following the Verdugo incident. And as you may have guessed, maintaining such a ban isn’t easy. But measures are put in place.

“It is certainly difficult to enforce, but our protocol includes sending an official notification that the individual is not allowed on Fenway Park property which gives law enforcement the ability to arrest them if they are found inside the ballpark,” said Red Sox spokesperson Zineb Curran in an email. “That threat offers a significant deterrent for fans that have been banned. We also flag them in the ticketing system so that they cannot purchase tickets or receive them through the ballpark app.”

Again, that assumes there’s only one way to buy tickets to a major-league ballpark. And there are so many more avenues available. The Red Sox spokesperson Silverman interviewed believed that the possibility of getting arrested because of the ban was enough of a deterrent.

The Red Sox also admitted that the team doesn’t use facial recognition technology to identify people coming into the ballpark. Whether or not any other MLB clubs do isn’t known.

So it’s possible that fans who have been banned from stadiums — in any sport — have dared to challenge that penalty. Presumably, they’d be on good behavior so as to not risk arrest, but we’re talking about people who thought it was OK to do something virtually every fan in attendance knows they shouldn’t do. Or maybe going to a ballgame just isn’t worth the risk after you’ve crossed that line.