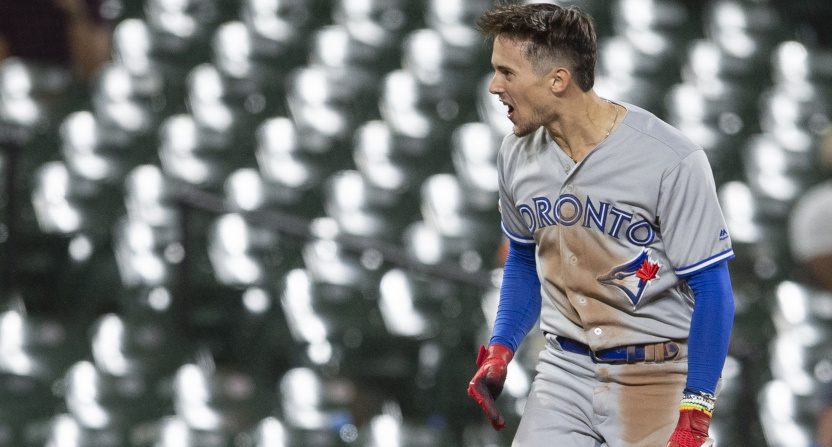 The Toronto Blue Jays have several promising young players known for their fathers’ baseball careers: Vladimir Guerrero Jr., Bo Bichette, Lourdes Gurriel Jr., and Cavan Biggio. On Tuesday, it was Biggio’s time to shine, and he made some MLB history in the process. Biggio hit for the cycle in Toronto’s 8-5 road win over the Baltimore Orioles Tuesday, making him and his father Craig just the second father-son pairing to ever accomplish that feat (following Gary and Daryle Ward in 1980 and 2004). Here’s video of the ninth-inning triple Biggio hit to complete the cycle:

Cavan Biggio has hit for the cycle! pic.twitter.com/yqNYCz0jVW

This marked the first time an opponent had hit for the cycle in the 27-year history of Baltimore’s Camden Yards stadium, and Biggio also became just the third Blue Jays player ever to hit for the cycle (following Kelly Gruber in 1989 and Jeff Frye in 2001). He did so in a night that saw him go 4-for-5 overall with three runs, four RBIs and two stolen bases. And his dad (who hit for the cycle himself with the Astros on Aug. 8, 2002) loved seeing it, as he told MLB.com’s Brian McTaggart:

Craig Biggio on his son, Cavan, hitting for cycle: "This whole year has been hard to put into words and obviously your son to hit for the cycle in his first year in the big leagues — and his mom drove down there to watch him play — makes it even more special."

There have been a whole lot of prolific father-son duos in MLB over the years, so it says something about how rare the cycle remains that this is just the second time one of those duos has done it. And this was another impressive moment from one of the Blue Jays’ significant scions; the multi-positional Biggio is batting .356/.399/.755 on the season and has produced 2.1 WAR to date (by Baseball Reference), while shortstop Bichette hit a walk-off extra-innings home run (which he called in advance) to lead the team over the Yankees Friday and has hit .355/.592/.948 this year. Third baseman Guerrero has had some struggles recently, but still has produced plenty of highlights (and he’s still just 20), and many are raving about left fielder Guerriel. So there’s a fair bit to be excited about with these players, and Biggio provided the latest case in point there Tuesday.