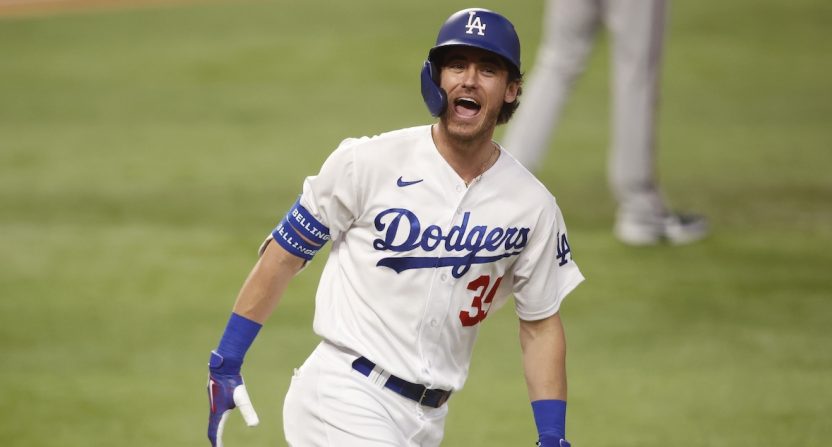 Cody Bellinger hit a gargantuan home run in the seventh inning for a 4-3 lead and Julio Urias threw three perfect innings to make that lead hold up, pushing the Los Angeles Dodgers to outlast the Atlanta Braves in Game 7 of an outstanding National League Championship Series.

The Dodgers came back from a 3-1 series deficit and advance to the World Series. They’ll face the Tampa Bay Rays, who won a seven-game ALCS over the Houston Astros on Saturday. The teams had the top two win-loss records in MLB this season.

Bellinger fought off three consecutive foul balls on a two-ball, two-strike count before Braves reliever Chris Martin hung a slider high in the strike zone that the Dodgers slugger didn’t miss. He knew he got it, dropping the bat and walking to first base while watching the ball go deep into Globe Life Park’s right-field seats.

Cody Bellinger gives the Dodgers the lead in the 7th – and he knew it 💥 pic.twitter.com/sR4NW6lMky

Besides the question of whether or not the Braves could rally to tie or take the lead, the drama immediately after Bellinger’s home run came from him apparently popping out his shoulder in a vigorous elbow-bump with Enrique Hernandez. Bellinger was seen wincing as he came to the dugout and appeared to be telling a teammate in the outfield that his shoulder popped out due to that overzealous celebration.

Dodgers may want to dial it back on those elbow bumps. Cody Bellinger apparently popped his shoulder on this one after his home run 😳 pic.twitter.com/BeUanUUALF

Hernandez had a big home run of his own in the sixth inning. Pinch-hitting for Joc Pederson in the sixth, he also fouled off three consecutive pitches. Then A.J. Minter left a fastball in the middle of the strike zone that Hernandez pulled into the seats.

The Braves took an early 2-0 lead on a first-inning RBI single from Marcell Ozuna and a second-inning homer by Dansby Swanson. Scoring first had been a successful path to victory for the Braves, putting pressure on the Dodgers to keep the score close and tie the game.

But the Dodgers bullpen held strong following Dustin May and Tony Gonsolin giving up three combined runs in the first three innings. Blake Treinen, Brusdar Graterol, and Urias didn’t allow a hit for the remaining six frames. An Atlanta lineup that had piled on runs during later innings in winning three of the first four games had trouble scoring late in the final three games with a chance to finish the series.

Julio Urias closes the game in the 9th in his 3rd inning, plus initial celebration. pic.twitter.com/UlhBfTlPEL

Corey Seager was named NLCS MVP, batting .310 with a record five home runs and 11 RBI in the seven games. And the Dodgers are now in their third World Series in four seasons. Will they end the franchise’s 32-year championship drought this time around?

Game 1 of the 2020 World Series begins Tuesday at Globe Life Park, where the Dodgers played their NLDS versus the Padres and this NLCS against the Braves. First pitch is scheduled for 8:09 p.m. ET.