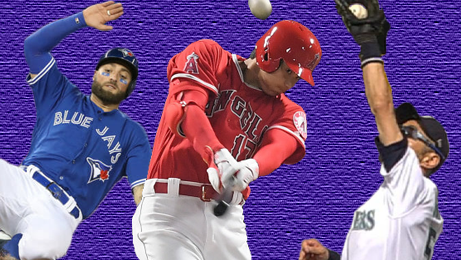 Baseball season is only a week old, but it has already featured some incredible moments. New stars showing out. Old ones showing life. Current ones showing off. Great games, incredible finishes, top plays and on and on.

We asked out writers to choose their favorite moment of Opening Week. Here are the ones they chose:

What is the coolest thing that happened during the first week of the MLB season?

In his first MLB plate appearance, he lashes a single to right field.

In his first MLB start on the mound, he strikes out six in six innings and gets the win and a quality start.

And then to top everything off, in his first home game at Angel Stadium, he launches a three-run homer in his first plate appearance, the night after his team was shut out and looked generally terrible on offense, and eventually added two *more* hits in an Angels rout. [Editor’s note: He followed up with an opposite-field home run off Corey Kulber.]

Yeah, I can deal with all of this. I don’t think it would have been possible for his debut in America to go any better.

Andrew Bucholtz: Kevin Pillar stealing second, third and home in the same inning struck me as the coolest part of the first week of the MLB season.

It’s so rare to see any steal of home, and a standing-up steal is even more impressive, but when you combine that with steals of second and third as well, that’s just insane. As a dedicated stats fan, I’m not always in favor of stolen-base attempts, but they’re great when you have someone who can pull them off at an efficient rate, and Pillar has often been pretty good at that (he posted 25 steals to four caught stealing outs in 2015, 14 to six in 2016 and 15 to six last year).

And getting on base with a single, then promptly stealing second, third and home is just amazing, illustrating how useful speed can be in certain circumstances.

Ian Casselberry:  Granted, it’s early (and we’ll probably be able to use that qualifier for the next month, at least), but it’s cool to see a player and storyline live up to the hype. Shohei Ohtani certainly qualifies, especially because of the uncertainty over his major-league debut. Giancarlo Stanton’s two home runs on Opening Day were also impressive.

But how about Charlie Blackmon’s start thus far? After six games, the Rockies outfielder has four home runs and a 1.324 OPS. And for anyone dismissing Blackmon’s numbers because he plays his home games at Coors Field, all of the Rockies’ games have been played on the road thus far. He appears to be picking up from right where he left off in 2017, when he was an NL MVP candidate with a .331 average, 1.000 OPS, 35 doubles, 37 homers, 104 RBI and 14 stolen bases, ranking fifth in the league with a 6.5 WAR.

The Rockies certainly think Blackmon can keep up that production, signing him to a reported six-year deal worth $108 million. (That could increase to $116 million with incentives and options.) He now doesn’t have to worry about a new contract, nor a free agent market that was particularly treacherous this past offseason. Blackmon got his before having to slot in somewhere behind what Bryce Harper and Manny Machado get this winter. Not bad at all for a guy who will turn 32 during this season.

Alex Putterman: Ohtani got the most attention this week, and rightfully so because he was absolutely scintillating. But I want to shout out some other awesome moments:

And, I’m sure, many more that I’m forgetting.

But in the non-Ohtani division, my choice for coolest moment goes to 44-year-old Ichiro Suzuki, who returned to Seattle on what seemed like little more than a ceremonial contract, then robbed a freaking home run at SafeCo Field in his second game back in a Mariners uniform.

Ichiro is back to robbing homers in Seattle.

This. Is. So. Cool. pic.twitter.com/LIdmiqVetW