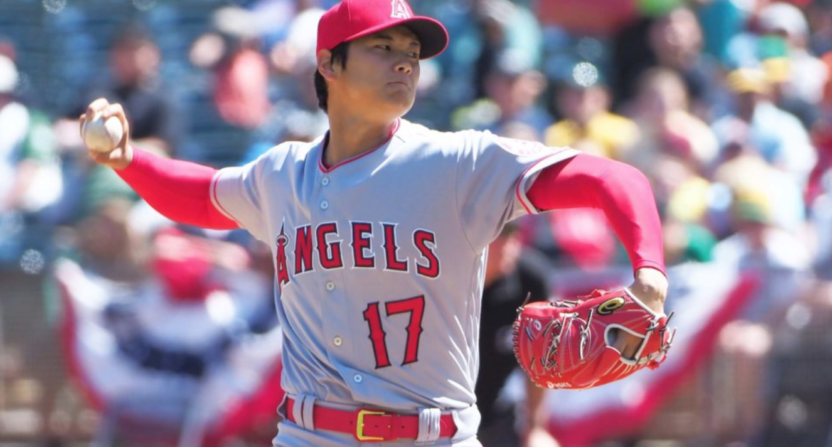 Days after debuting as a hitter (and going one-for-five) on Opening Day, Japanese sensation Shohei Ohtani made his first start on the mound Sunday afternoon for the Angels. And although his final line — six innings, three runs, six strikeouts — wasn’t extraordinary, his outing overall was awfully impressive.

After a fairly disastrous Spring Training, Ohtani came out in the first inning Sunday against the A’s with a high-90s fastball and a nasty, hard-diving splitter. Over the course of his outing, he generated an impressive number of whiffs, beginning from the very start. In the first at-bat of his Major-League pitching career, the righty fanned Oakland’s Marcus Semien with a split that was borderline pornographic.

Filthy. Shohei Ohtani with his first career strikeout on the first batter he faces in his MLB debut.

After inducing a pop-up from the second batter he faced, he sent down Matt Olson swinging on three pitches, finishing off the slugger with another brilliant splitter.

100mph Fastball + a pair of filth at 89mph pic.twitter.com/3TLieASQhX

Alas, Ohtani’s second inning of work did not go nearly as well as his first. With one out, the rookie allowed back to back singles, then a towering home run off the bat of Matt Chapman. He quickly escaped the inning, but with three runs on the board his outing was certainly not unfolding as he would have dreamt it.

Then, just like that, he settled down. Over the next four innings, Ohtani allowed one walk and no hits while striking out three. He exited after six frames and 92 pitches with a quality start locked up and a win on the way.

In the end, the specifics of Ohtani’s outing are less important than how the 23-year-old phenom looked. And by both the eye test and the measurables, Ohtani graded out about as well as he could have. As FanGraphs’ Jeff Sullivan pointed out on Twitter, he threw strikes at the rate of Corey Kluber and induced misses at the rate of Dellin Betances. That’ll sure get it done.

left a few sliders up, but the HR slider wasn't actually that bad pic.twitter.com/of9xn1aF4f

Sunday was only one start, and we should obviously be careful in drawing too many conclusions from a single six-inning outing. But if Ohtani can fire 98 mile-per-hour fastballs and get whiffs on his splitter, he’s going to be just as good as everyone expected him to be.