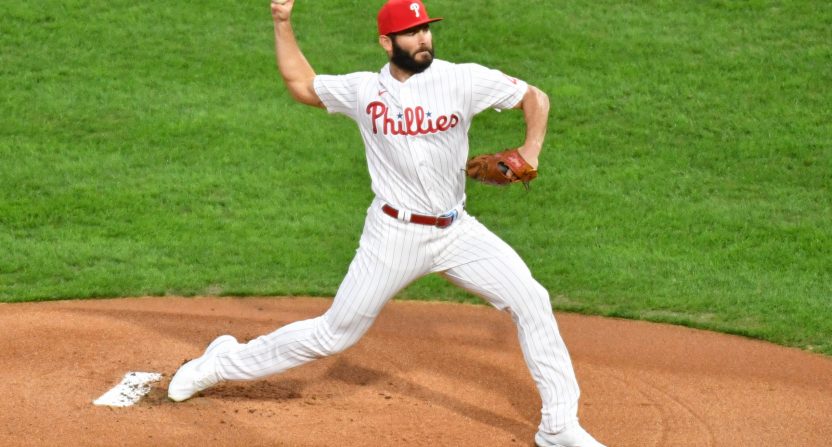 The Chicago Cubs and starting pitcher Jake Arrieta have agreed to a one-year deal worth $6 million, according to Patrick Mooney of The Athletic. Jon Heyman of MLB Network was the first to report that the two sides were close to a deal on Friday.

Jake Arrieta’s one-year agreement with the Cubs, pending physical, is worth $6 million guaranteed, according to a source familiar with the deal.

This is fun for the Cubs, Arrieta, and Cubs fans for sentimental reasons, at least. After the Cubs made one of the biggest steals in baseball history to acquire Arrieta and Pedro Strop from the Baltimore Orioles in 2013, Arrieta proceeded to put together a 2.73 ERA over 803 regular-season innings for the Cubs, won the 2015 NL Cy Young Award (with a 1.77 ERA in 229 innings pitched), pitched two no-hitters, and went 2-0 with a 2.38 ERA in two World Series games for the 2016 world champion Cubs. He also threw a complete game shutout in the 2015 Wild Card game, capping off his ridiculous Cy Young season.

Jake Arrieta was the best pitcher in the world heading into the 2015 wild card game and he let Pirates fans know they had no chance.

One of my all-time favorite memories from this Cubs era. pic.twitter.com/8rbI7pfDwU

Hard to believe after the way everything came together in 2015 and 2016, but Jake Arrieta is the last pitcher to win a playoff game for the Cubs (Game 4 of the 2017 NLCS).

But he’s not that Jake Arrieta anymore. That’s why he’s signing a one-year deal for $6 million.

The Cubs opted for Yu Darvish instead of Arrieta ahead of the 2018 season, and that proved to be the right choice. Darvish pitched like a true ace over the last season and a half for the Cubs, while Arrieta had a 4.36 ERA and 4.55 FIP over the last three seasons for the Philadelphia Phillies.

But then the Cubs made a very questionable trade of Darvish to the San Diego Padres for Zach Davies and a bunch of teenagers earlier this offseason, before letting Jon Lester sign (quite cheaply) with the Washington Nationals and letting Jose Quintana sign with the Los Angeles Angels. That’s while having only two sure things for solid production (on the surface) in rotation, with the annually underappreciated Kyle Hendricks, and the newcomer Davies. The Cubs added Pirates veteran Trevor Williams on a one-year deal, but he’s coming off a 6.18 ERA, 6.30 FIP season for Pittsburgh. They have crafty right-hander Alec Mills, who threw a no-hitter in 2020; but he also had a 5.44 FIP, and we have no idea if he can be counted on for a lot of innings- or if the Cubs even want him in the rotation instead of being a swingman. There’s also live-armed right-hander Adbert Alzolay, but he’s another case of being a total “who knows” in terms of both innings and being effective (and, like Mills, the Cubs may rather have him in the bullpen).

This is where Arrieta comes in and can provide real value to the 2021 Cubs. Arrieta can provide some reliability at the back-end of the rotation to eat innings and give serviceable pitching most every fifth day. He’s also a competitor who brings an edge to the playing field and locker room that’s needed for this particular Cubs group, especially after losing Lester.

Additionally, there’s reason to believe that, while he’s not the previous Chicago version of Arrieta, he could at least be better — perhaps quite a bit better — than he was with the Phillies. And he’s surely happy about a change of scenery, especially when it’s going back to the place he had the most success.

The Philadelphia defense was absolutely dreadful in 2018 and 2020, ranking dead-last among MLB teams in defensive runs saved in 2018 (-118 DRS) and third-worst in MLB in 2020 (-33 DRS). Defensive performance, particularly in the groundball department, is huge for Arrieta. While he missed many more bats and was a soft-contact master in his previous stint with the Cubs, he benefited greatly from a Cubs defense — a historically special unit in 2016 especially — that ate up groundballs. Over the last three seasons with the Phillies, Arrieta had groundball percentages of 51.6 (2018), 51.3 (2019), and 51.8 (2020).

We'll see what Arrieta has in the tank but since 2018, only 5 (qualified) starters have had a ground ball rate over 50%:

While the Cubs don’t have their 2016 defense, they still have the potential to be a very good groundball defense, especially if 23-year-old Nico Hoerner becomes their regular second baseman (his offense still needs a lot of work, and he’s never played an inning at Triple-A, so it’s possible the Cubs have him start the season in the minors). That’s along with fantastic defender Javy Baez (shortstop), Kris Bryant (third base), Anthony Rizzo (first base), and solid utility glove David Bote.

So, the Cubs surely think that they can get more out of Arrieta than Philadelphia did, and it’s only a one-year commitment. At the very least, he gives the Cubs needed veteran depth and innings, and he gives Cubs fans something to be happy about- even if it may end up being more for sentimental reasons than actual 2021 production.