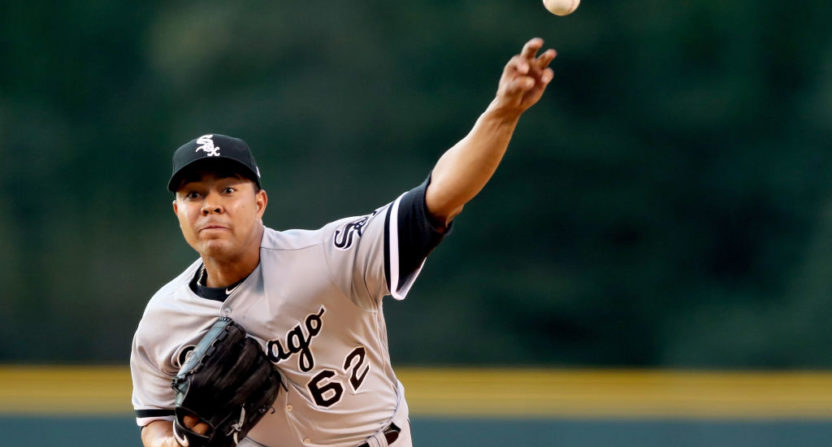 The hot stove is lit, children. On Thursday, the Chicago White Sox finally traded starting pitcher Jose Quintana, but his destination won’t be far away – he’s heading to the Chicago Cubs for a package of four prospects, including the highly-touted Eloy Jimenez.

Jimenez and Cease were the Cubs’ top two prospects, per MLB.com. Jimenez was ranked eighth overall in baseball, while Cease checked in at #63. The acquisition of Jimenez now gives the White Sox three of baseball’s top 11 prospects (again, per MLB.com), with Yoan Moncada and Michael Kopech (both acquired in the Chris Sale trade) joining Jimenez.

The White Sox didn’t budge on asking for a hefty package of players for Quintana, and they had their demands met by the reigning World Champions. The 28-year old Quintana is controllable through 2020 via a pair of club options, meaning that the Cubs achieved their goal of acquiring a starting pitcher to bolster their rotation that was *not* a rental. Despite his disappointing 4-8 record and 4.48 ERA, Quintana has a history of success, posting four straight seasons of at least 200 innings, 160 strikeouts, and an ERA under 4.00 from 2013-2016.

He also did this shit during the Futures Game last year in San Diego.

In case you’re curious about whether or not the Cubs and White Sox make deals often, the answer is “no”. This is the first trade between the two Chicago teams in more than a decade.

. @Cubs and @WhiteSox made only one other @MLB trade this century: 11/16/06, Neal Cotts to #Cubs for Carlos Vasquez and David Aardsma.

The Cubs will slot Quintana into a rotation that has struggled this season, posting a 4.66 ERA on the season (ranking 17th in baseball and eighth in the National League, right ahead of the Phillies). Quintana, Jon Lester, and Jake Arrieta will make for a fearsome trio going into the second half of the year, and if Kyle Hendricks returns healthy and effective, Chicago will only have to worry about patching one spot in their rotation rather than three.

The remaining control left on Quintana’s contract will also help the Cubs deal with the expected departures of Arrieta and John Lackey this offseason. Going into 2018 with Lester, Quintana, and Hendricks as their top three starters would not be a bad thing for the Cubs, though they’d likely need to acquire another starter, especially if Hendricks doesn’t rebound like expected.

At 43-45 and 5.5 games out of the NL Central lead, the Cubs needed to make a move. That’s exactly what they did by acquiring Quintana, and the time for them to make a run at surpassing the Milwaukee Brewers in the division is now. That end of month series between the two teams at Miller Park just took on a little more significance, and it’ll be interesting to see if the Brewers now feel pressured to make a move in response.