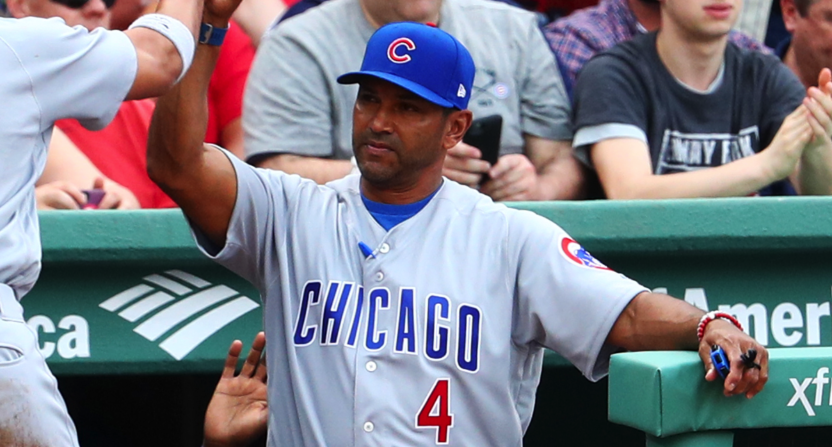 For nearly 10 years, Dave Martinez has been viewed as potential major league manager material. It appears that Joe Maddon’s right-hand man will finally get his opportunity. FanRag Sports’ Jon Heyman reports that the Washington Nationals will name Martinez as their next manager.

According to Heyman, the announcement will be made after the World Series since MLB prefers such news not to be pushed out during the World Series and take away from baseball’s showcase event. The Washington Post‘s Chelsea Janes confirms that, reporting the terms of Martinez’s contract with the Nationals.

BREAKING: Nationals have finalized deal with Davey Martinez. Three years and an option, according to a person familiar with the situation.

Serving as Maddon’s bench coach in Tampa Bay and with the Cubs for the past decade, Martinez began interviewing for MLB managerial jobs in 2010, talking to the Blue Jays and Indians about their openings. In the years since, he’s interviewed with the White Sox, Astros and Cubs when they were seeking new managers. He also sought to become the Rays’ skipper after Maddon left for the Cubs.

This wasn’t the first time Martinez has talked to the Nationals, either, having interviewed with the team before Matt Williams eventually got that job. Obviously, Washington hopes this first-time manager works out better than the last one.

Martinez, who played 16 seasons in the major leagues, had gone long enough without being hired that it was worth asking why no team had given him a shot. Was he waiting for just the right job, having gone through the struggles of coaching a small-market club and then experiencing the benefits of a large-market team willing to invest major resources toward winning a World Series? Did he want to enjoy championship success with Maddon before moving on? Did he not interview well?

Such questions are now moot with Martinez being hired by the Nationals, which was arguably the best MLB managerial opening after Dusty Baker was surprisingly dismissed. The Nats won 97 games during the regular season, finishing with a 20-game lead in the NL East and the second-best record in the league. With that success, Washington was viewed as a favorite to defeat the reigning World Series champion Cubs in the divisional round of the NL playoffs, but were eventually defeated in the maximum five games.

By not bringing Baker back, the Nationals made it clear that failing to get to the World Series or winning a championship was an unacceptable result. With those sorts of expectations, it’s a bit curious that the team opted to hire a first-time manager, rather than a more experienced leader. (It should also be noted that Martinez’s three-year deal with an option is more than the two years Baker received in his contract with the Nationals.)

initial word hearing out of DC is that girardi is "not likely." for one, nats don't believe in paying big bucks to manager.

Both John Farrell and Joe Girardi, who have each won World Series championships, were available. Heyman reports that Farrell did indeed interview for the Nats job, though his conversation with the team was much shorter than Martinez’s full-day discussion. As for Girardi, it’s believed that his price may have been higher than Washington was willing to pay. He just finished a four-year, $16 million contract with the Yankees, and he surely would’ve sought a raise.

It’s also possible that Girardi wanted a break after working through the grind of managing the Yankees for the past 10 seasons. Additionally, as the Washington Post‘s Barry Svrluga points out, the Nationals’ front office situation could be uncertain with general manager Mike Rizzo’s contract expiring after next season. That, along with Bryce Harper becoming a free agent (in addition to Daniel Murphy and Gio Gonzalez), has fueled the narrative that 2018 is the last opportunity for Washington to contend before its window begins to close.

If that’s the case, perhaps Martinez is also viewed as a better choice to manage the team through a transition as more of the team’s high-priced and home-grown stars become free agents and possibly move elsewhere. That’s not a project which Farrell or Girardi may have been interested in, if that even came up in discussions. Martinez certainly isn’t going to view this as a one-year job, and would have been an ideal candidate for a Nats team in transition. So why not hire him now?

Regardless, if Martinez was waiting for just the right job, he certainly got it with a team all set for another run at a World Series. Maybe he can be the guy to finally fulfill the championship expectations attached to this team for the past three to four seasons.