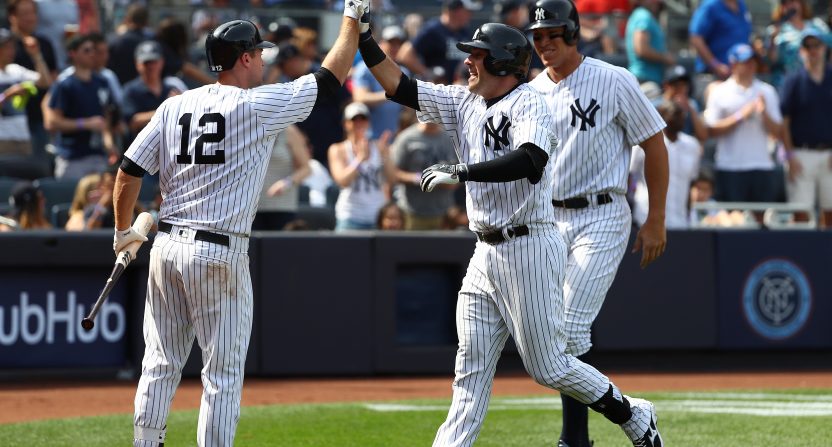 This was supposed to be as close to a rebuilding year as the Yankees ever come.

With a young team, a lower-than-usual payroll, several top prospects on the way and a huge free agent class two years away, 2017 was supposed to be a time for the Yankees to develop their talent, compete if it was convenient and wind up somewhere around .500 at the end of September.

But so far, Joe Girardi’s team has been one of the best teams in baseball. On Saturday, the Yanks won their third straight against the Orioles to pull into first place in the AL East with a 15-7 record, best in baseball. Their run differential (+46) is tops in the league as well. They’ve won 14 of their past 17 games. Young players like Aaron Judge and Luis Severino are flashing potential many doubted they had. And on Friday, they came back from down 9-1 to win on a walk-off home run, showing the type of resilience longtime fans associate with the late-90s dynasty. And they’ve done all this mostly without slugging catcher Gary Sanchez (soon to return from a biceps strain) and steady shortstop Didi Gregorius (just back from a shoulder injury).

Just like that, a team almost written off a month ago looks like a bona fide playoff front-runner.

What’s most promising is that the Yankees have found success not by leaning on the type of veteran castoffs who’ve dotted their lineups in recent years. They won thanks to the youngsters who figure to lead the next era of Yankee dominance. Yes, 30-somethings Chase Headley and Matt Holliday are having good years, but the team’s best hitter has been Judge, 25, who leads the American League with 10 homers and a .767 slugging percentage. The team’s best starting pitcher has been 23-year-old Severino, who has a 3.00 ERA, 2.93 FIP and 33 strikeouts in 27 innings, followed by 28-year-old Michael Pineda, who has a 3.14 ERA and 37 Ks in 28 2/3 innings.

Meanwhile Masahiro Tanaka has recovered from two bad starts to begin the season, twirling a complete-game shutout against Boston on Thursday, and CC Sabathia has been competent as a back-of-the-rotation hurler. Even Jordan Montgomery, an unheralded prospect with only a low-90s fastball, has pulled off a 3.78 ERA.

When you add all this together, the Yankees had the second-best ERA in baseball and the third-best FIP entering Saturday. They’d allowed the second fewest runs. And thanks to Headley, Holliday, Judge and others, they also ranked fifth in team OPS with the fifth most runs scored of any team.

As with any team off to such a hot start, there are plenty of candidates for regression. Judge may be powerful, but no player in history has turned half his fly ball into homers the way he has so far. And Headley, Holliday and Jacoby Ellsbury have all benefited from BABIPs that are likely unsustainable.

But on the pitching side, Severino and Pineda’s success is not particularly BABIP-aided. Both have added a little velocity, commanded their breaking pitches better and seen their strikeout rates go up as their walk rates go down. They still might toward their sub-par 2016 stat lines, but for the most part their gains look real.

With Tanaka atop the rotation alongside a revitalized Severino and Pineda—plus Aroldis Chapman, Dellin Betances and Tyler Clippard heading one of baseball’s best defenses—the Yankees might allow far fewer runs than anyone outside the Tri-State Area expected them to.

And the good news keeps coming. Sanchez will be back soon, which should help mitigate the inevitable regression from many of the team’s hitters. Gregorius stepping in for Ronald Torreyes will aid the cause as well, as will first baseman Greg Bird improving on his putrid start.

The Red Sox remain the favorite in the AL East, but with the Blue Jays off to a horrific start, second place is wide open. Before the season, no one knew who besides Boston, Cleveland and Houston would challenge for an American League playoff spot. Well, it sure looks like the Yankees will be right there. Entering Saturday, Fangraphs gave New York a 56.6 percent chance to reach at least the Wild Card Game.

Of course, a lot can go wrong over the next five months. Injuries remain a risk for a team with as many older players as the Yankees have, and Judge will hit a wall at some point. Maybe Severino and Pineda will forget how to throw strikes. Maybe Tanaka’s elbow will give out or Holliday’s body will break down. Maybe Sanchez, Judge, Bird and other young players will fail to progress as expected.

But for a team that came into 2017 with a whole lot of questions, the Yankees are getting some very encouraging answers.