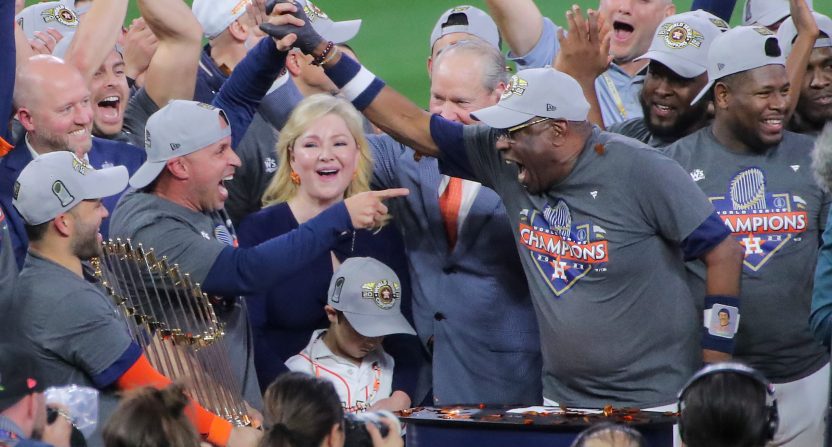 The Houston Astros are World Series Champions. That means that for the first time in his long and decorated career as a manager, Dusty Baker is a World Series champion.

By most objective standards, Baker is one of the greatest managers in MLB history. Through the 2022 season, his record is 2,093-1,790. Baker ended the 2022 regular season tenth all-time in both games managed and games won as a manager. But unlike everyone above him on both lists, Baker didn’t have a World Series championship. But after his Astros defeated the Philadelphia Phillies in Game 6 of the 2022 World Series on Saturday night, that is no longer the case.

No older manager has ever claimed baseball’s top prize.

At 73 years old, Dusty Baker is the oldest manager ever to win a World Series, passing Jack McKeon. pic.twitter.com/7pT7F08fQa

Or, to look at how long Baker’s journey has been from another angle, the lead-off hitter from the opposing team in the first game he ever managed is the father of Jeremy Peña, the 2022 ALCS and World Series MVP who was still four years away from being born.

The Astros celebrated around their manager shortly after clinching the franchise’s second World Series championship.

And while the Astros aren’t exactly a beloved team outside of Houston, that distaste does not extend to their manager, who is one of the most well-liked people in baseball. If anyone needed any proof of that, the scores of congratulations he received in the aftermath of Saturday night’s victory should erase all doubt.

GO ON AND GET YOUR WORLD SERIES CHAMPIONSHIP RING, DUSTY!!!!!!!!

Dusty Baker — 73 years old, owner of 2,093 regular-season victories, winner of nine division titles and three pennants, seen as one of the most generous souls and best guys in baseball — can add one more achievement to an already-loaded resume:

So Happy for Dusty.

Dusty Baker went FORTY YEARS in between World Series titles, after winning in 1981 as a player

Prior longest such stretch: 29 years, by Bob Lemon

really happy for Dusty Baker. He's become a much better manager as his career has progressed, and now there won't be this big "BUT" any time we discuss his legacy, too

Congrats to Dusty Baker, who has won his first World Series as manager 20 years after coming close in San Francisco. Many Giants fans and folks in industry thrilled for Baker, who likely was going to HOF anyway. Now there’s zero doubt.

Given how good the Astros figure to be in 2023, he’ll likely have a pretty good chance.