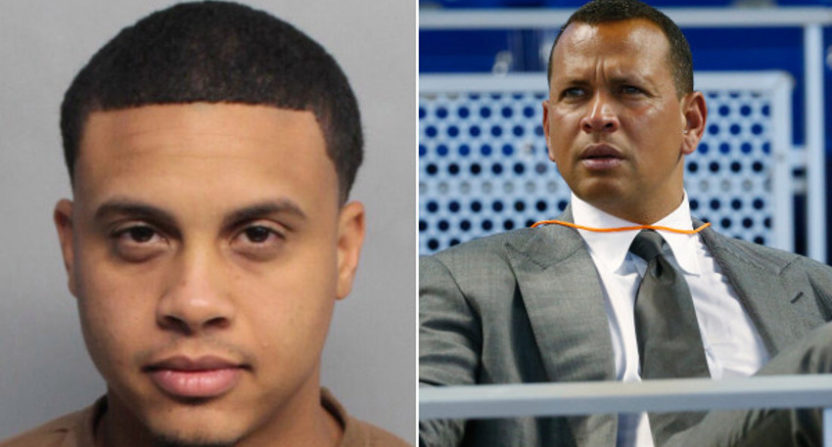 A Times Square Lamborghini sale gone wrong led to charges of kidnapping and unlawful imprisonment, but it also spawned an argument over just how related the kidnappee is to former MLB star and current ESPN (regular season) and Fox (postseason) analyst Alex Rodriguez.

29-year-old Norberto Susini, a former minor league baseball player in the Mariners’ and Twins’ organizations (plus with unaffiliated teams and in the Mexican Baseball League) who now “sells exotic cars” as per The New York Post, was held against his will when trying to complete a deal early Thursday morning, and apparently brought up his connection to A-Rod when talking to police later:

Norberto Susini, 29, told cops he is the retired slugger’s nephew and that he was held against his will by Lamin Vucetovic, 33, and Anthony Gilkes, 30, police sources said.

…He met the pair in Times Square at 11:15 p.m. Wednesday to close a deal on the Lambo and they picked him up in a Rolls Royce, but Vucetovic tried to pump the brakes on the deal, sources said.

He demanded Susini return a deposit he put down on the car, and then Vucetovic and Gilkes allegedly held Susini against his will, according to sources.

The pair called Susini’s business partners and demanded a $35,000 ransom along with a car, but the partners called cops instead, NYPD officials said.

Now, the Post story just says “Cops arrested Vucetovic and Gilkes at 3:50 a.m. Thursday,” but a New York Daily News piece suggests there’s another side to this story:

Gilkes and Vucetovic turned themselves in at 3:50 a.m. Thursday, and were initially charged with unlawful imprisonment and kidnapping, police said. At first, both men were initially accused of holding Susini against their will, NBC reported, citing law enforcement sources.

By Thursday night, prosecutors declined to prosecute Gilkes, and Vucetovic was only charged with attempted coercion, not kidnapping.

Prosecutors accused Vucetovic of sending a text messages with a photo of Susini next to a ticking time bomb to one of his friends, threatening to kill him if he didn’t come up with the cash.

He was released on his own recognizance after an arraignment in Manhattan criminal court Thursday night.

“It was all a misunderstanding. I got robbed of $35,000. They sold me a car that was stolen. I was just trying to get my money back,” he said.

Oh, but this gets better. Rodriguez didn’t address this himself, but did to the Post through a spokesperson, and said Susini doesn’t count as a relative:

“This guy is 100-percent not Alex’s relative,” a spokesman for A-Rod said.

But hey, wonder why A-Rod might not want to be associated with this guy? Well, beyond the questionable business decisions of trying to sell Lamborghinis to people who apparently think kidnapping is an appropriate negotiation tactic (although, as mentioned, they claim something rather different), Susini has a bit of a record, as per Heavy.com:

In 2014, Susini was charged with three counts of dealing in stolen property and one count of organized fraud, according to the Miami-Dade Clerk’s office. The disposition is listed as “no action,” denoting that the prosecutor declined to press charges.

In January 2018, Susini was charged with another third-degree felony for grand theft of a vehicle. That case was also marked as no action.

According to public records, there is an open case against him. Susini is due in court later this month on a third degree felony charge for grand theft of a vehicle.

The photo of Susini at above left comes from the Miami-Dade clerk’s office. So, yeah, he maybe isn’t the best guy to be tied to. (Or the best guy to try and buy a car from.) And, in an even colder move than A-Rod denying Susini, Rodriguez’s half-brother Joe Dunand (who had the relationship with Susini’s mother) tried to disassociate both himself and Rodriguez from the story in comments to the Daily News:

Sources close to the former Yankee said Rodriguez’s half-brother, Joe Dunand, had dated Susini’s mother — who had her son with another man in a prior relationship. Susini’s mother, who never married Dunand, died 20 years ago, the sources said.

Dunand said as much when reached by the Daily News Thursday. “He’s not Alex’s nephew. He has nothing to do with him,” Dunand said.

“It’s only a story because they want to attach Alex’s name to him. I don’t know what that kid does with his nights. Alex is not responsible for him.”

One possible moral of this story? If you’re going to kidnap a guy trying to sell you a Lamborghini and you don’t want the eventual failure of this plot to become major news, maybe ask him if he has any connections to Alex Rodriguez first. Distant as they may be.