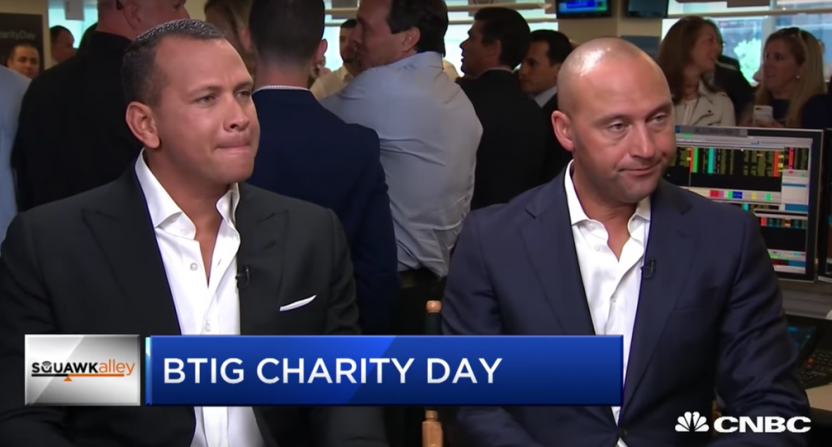 Derek Jeter and Alex Rodriguez have an, um, complicated history.

They were best friends as young players, until some mildly disparaging public comments by A-Rod left their relationship icy. Then they were teammates, but they were constantly contrasted with each other, and they never seemed close. Then Jeter retired a hero and Rodriguez became a pariah and now here we are.

Well on Tuesday, Jeter and Rodriguez appeared together on CNBC to promote their respective charities, and the results were awfully awkward. CNBC reporter Bob Pisani seemed interested in the duo’s tortured history, A-Rod’s romantic life and baseball’s pace of play. By the end, Jeter and Rodriguez seemed like friends again, united by a common enemy.

Whew, that was a mess. To help you make sense of all the subtext here, The Comeback has translated what Pisani, Jeter and Rodriguez said into what they were actually thinking.

Pisani: Alex Rodriguez, 12 or 13 seasons [with the Yankees]. We were trying to figure it out.

Translation: Should we count the year you were suspended for using PEDs? We can’t decide.

Pisani: This is a treat to see you two together!

Translation: I thought you hated each other.

Pisani: The press made a little thing about you two, back and forth. Was that real?

Translation: Let’s talk about whether and to what degree you two despised each other.

Jeter: You’re bringing up stories from about 20 years ago.

Rodriguez: Is this the History Channel?

Pisani [to A-Rod]: We were going to talk to you about the charity events, but you kind of moved everything around with what happened at the Met Gala. You kind of stole the whole show.

Rodriguez: This interview is going all type of places.

Translation: What the hell are you doing, Bob?

Pisani [to Jeter]: He showed up with J-Lo, of course. You heard about that?

Jeter: What channel is this?

Rodriguez: I went about 20 years ago to Kalamazoo, and we did a clinic for about 200 kids, with his sister Charlene, and they do have an awesome organization.

Translation: Derek and I are buddies, and I’m a good person.

Pisani [to Jeter]: Now you’ve been in the news recently, not about the Met Gala, but you’re interested in buying the Marlins. Tell us about that.

Jeter says: There is absolutely nothing to add to that.

Jeter: We’re here for the charity event today, and we’re not here to talk about anything else.

Translation: We’re here for the charity event today, and we’re not here to talk about anything else.

Pisani: [Game 7 of the World Series] was huge. The rest of the games, maybe sometimes not as great.

Rodriguez and Jeter: *Laughter and knee-slapping*

Translation: Well we’re stuck in this interview from hell, so we might as well enjoy it.

Pisani [to Jeter]: Did you enjoy the Met Gala last night?

Jeter: I was not there.

Pisani [to Rodriguez]: Did you enjoy the game? Er, the Met Gala?

Translation: Are we done yet?