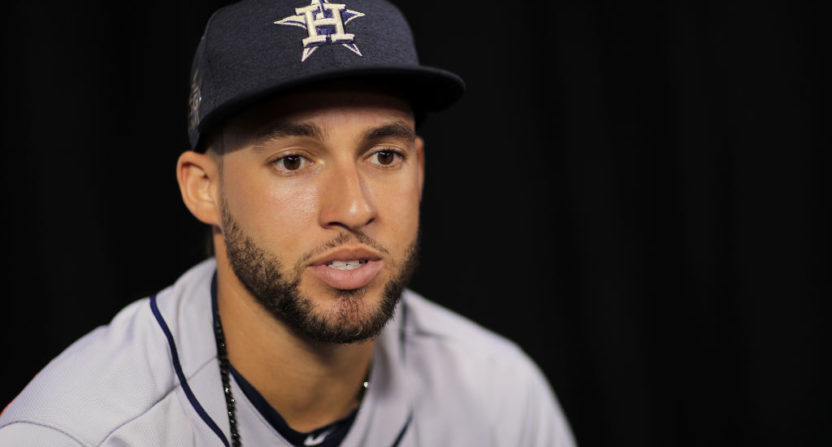 In the bottom of the third inning of Tuesday night’s MLB All-Star Game, Houston Astros outfielder George Springer participated in an odd, but fun experiment: He was interviewed live on Fox as he was in the field with the game going on around him.

Though the interview was interesting and the ball never came near Springer as he was chatting with Joe Buck and John Smoltz, it was fair to wonder why a player would want to be hampered by a mid-game interview.

Well, it turns out Springer had a good reason.

The outfielder has dealt with a stutter throughout his life, and he wanted to show others with speech impediments that they shouldn’t be afraid to speak.

“I can’t spread a message to kids and adults if I’m not willing to put myself out there. I understand, I’ve got a stutter. It is what it is. It’s not going to stop me from talking or having fun.”

George Springer wore a microphone on national TV tonight, says his stutter is not going to stop him from talking. @sayorg #Astros #ASG pic.twitter.com/fL5Fsh4fBQ

Springer has learned to manage his stutter through speech therapy, and he now serves as a spokesman for Stuttering Association for the Young.

Here’s a clip of Springer’s in-game interview on Fox:

The All-Star Game is watched by millions of people, some of whom are undoubtedly young people with stutters who don’t often hear people who sound like them speaking on television. Springer putting himself out there like that sends a cool message to any kids (or adults) insecure about their speech.

Springer is an incredible player, hitting .310/.380/.613 this season and ranking fifth among AL position players in WAR, according to Baseball-Reference. He’s also, by all accounts, a great teammate and a good guy. Baseball is lucky he’s so willing to seek a spotlight.