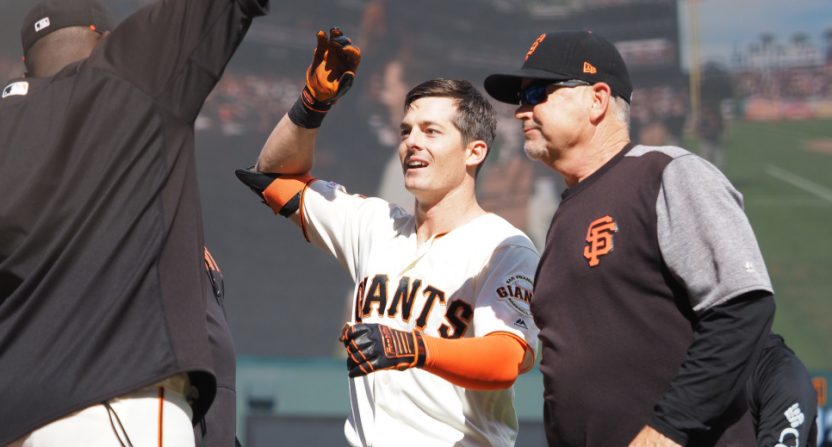 The San Francisco Giants have been on quite the run lately, and they kept that up with this weekend’s homestand against the New York Mets. The Giants had won five games in a row heading into the series opener Thursday, and they proceeded to take three of four from the Mets to improve to 50-50 on the year. Amazingly enough, all of those wins came in extra innings; that includes Sunday’s, where San Francisco outfielder Mike Yastrzemski (Carl‘s grandson, he’s seen above celebrating the win with manager Bruce Bochy) hit a walk-off opposite field home run in the bottom of the 12th to give the Giants a 3-2 win.

However, that was just one of the weird endings to this series. On Friday night, the Giants won 1-0 in the 10th on a two-out Pablo Sandoval bloop that was dropped in the outfield by Dominic Smith, allowing runner Alex Dickerson to score from first after a wild throw home:

And Thursday also saw some shenanigans, with the game eventually decided in the 16th. Pete Alonso homered to give the Mets a 2-1 lead there, but Brandon Crawford tied it for the Giants with a double, and Donovan Solano then delivered the game-winning RBI single:

Donovan Solano hopes you all get home safely.
#SFGiants pic.twitter.com/VotFyoIJfU

The Mets got some revenge with their lone victory of the series (an 11-4 win) Saturday, but this still wound up being a great series for the Giants, and part of a surprising overall run from them. They’ve now won 16 of their last 19 games and are back to .500 despite being 35-47 on June 29.

Whether that will lead to much of a postseason push from the Giants is debatable. They’re still well back of the 67-35 Los Angeles Dodgers in the division. However, they’re not far back in the wild-card race, where the two National League berths are currently occupied by the 52-45 Washington Nationals and the 53-48 Milwaukee Brewers; other teams in the mix include the 51-47 St. Louis Cardinals, the 52-48 Philadelphia Phillies, and the 50-50 Arizona Diamondbacks. We’ll see if the Giants can keep up their current winning pace or not, but they’re certainly making things interesting at the moment. And they keep finding strange ways to win.