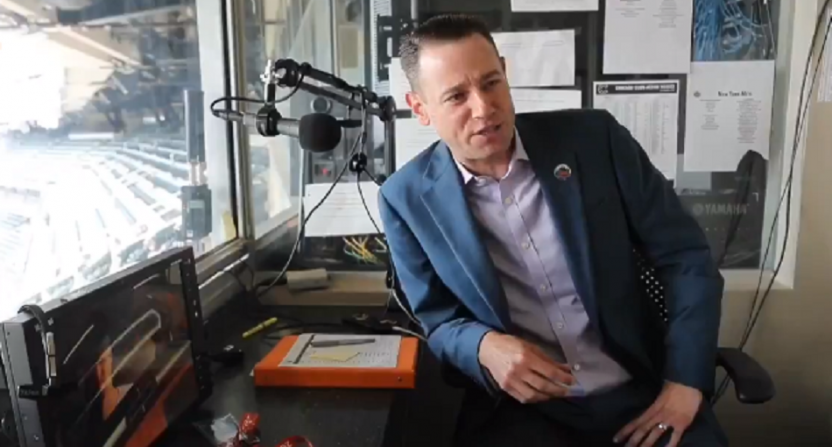 When you hear “Cosell” and “announcer” in the same sentence, you likely think of the legendary sports broadcaster Howard Cosell. And yes, they’re related- Colin is Howard’s grandson.

Howard passed away in 1995, and Colin told the AP’s Ben Walker that he wants to keep the Cosell legacy going in the world of sports announcing.

“This is something I’ve wanted to do my entire life,” he said. “Get it right. Keep the Cosell legacy alive.”

While they have very different voices (and personalities), Colin actually does a tremendous imitation of his grandfather.

“I pride myself on doing the best imitation of my grandfather in the world,” Colin said.

And Colin even hopes to bring the imitations of Howard into the PA calls at Citi Field.

Well, there’s a “Frazier” on the Mets. Veteran third baseman Todd Frazier (hamstring strain) is on the disabled list, but should return to the Mets soon (he’s currently on a rehab assignment in Triple-A). And when Frazier returns to Citi Field, Cosell plans to pronounce “Frazier” like his grandfather would.

New Mets PA announcer Colin Cosell has something special planned for Todd Frazier's return from the DL: a nod to his famous grandfather.

“With Todd’s blessing, of course,” he said.

Cosell’s pronunciation is sure to bring winks and smiles to the Mets’ crowd. The homage to Howard, who died in 1995, will certainly please Colin’s wife, Julia — her favorite player is Frazier.

“It’s a way of remembering, in a fun way,” he said the PA booth, a few hours before his first game.

Before landing the Mets’ job, Colin won three Emmys as a broadcaster with MSG Varsity, worked freelance for Verizon FiOS1 Sports, and was an intern on Saturday Night Live.