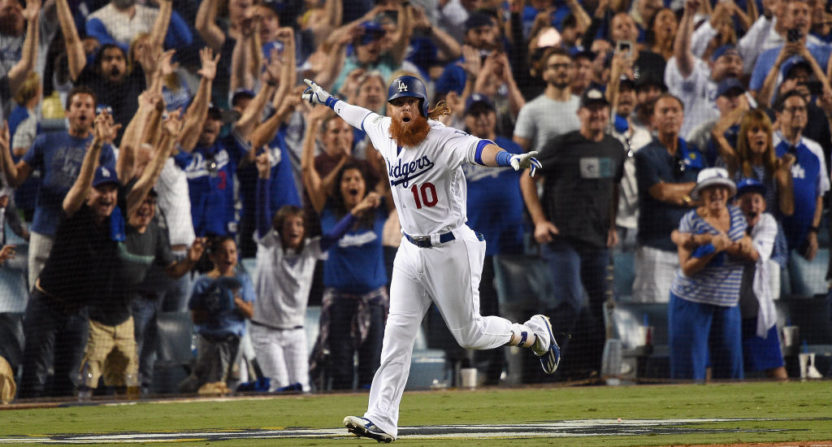 With Game 2 of the NLCS tied 1-1, Cubs reliever Brian Duensing walked the Dodgers’ Yasiel Puig to lead off the bottom of the ninth inning.

That Duensing even started the ninth inning for the Cubs was a debatable decision. The 34-year-old has had a fine season (2.74 ERA, 3.41 FIP in 62 1/3 for Chicago), but *he’s Brian Duensing*. He’s your run-of-the-mill, journeyman middle reliever (who had an ERA over 4.00 the previous two seasons), and he was being asked to start the bottom of the ninth of a tied NLCS Game 2, with the Cubs trailing 1-0 in the series. This was after he had already pitched the eighth inning, so it was only a matter of time before the (usually) middle reliever’s stuff started to fade.

But, letting Duensing start the inning was at least understandable, and the assumption was that Cubs manager Joe Maddon would go to closer Wade Davis if Duensing ran into some trouble.

After the Puig walk, Los Angeles’ Charlie Culberson put down a sacrifice bunt to advance Puig to second base. Maddon then let Duensing face Dodgers pinch-hitter Kyle Farmer with the winning run at second base and one out, and the gamble worked out for Chicago, as Duensing got the strikeout.

But with the top of the order up next, Maddon walked out of the dugout to make a pitching change and bring in… John Lackey? The Cubs’ No. 5 starter in the regular season, who had a 4.59 ERA, 5.30 FIP (second-worst among qualified MLB starters), allowed an NL-worst 36 home runs, and just pitched yesterday (he he had not pitched back-to-back days all season)? Yes, this was the guy Maddon chose to bring in, instead of Wade Davis.

Lackey immediately walked Chris Taylor, and with Justin Turner (.322/.415/.530) up next, it really had to be Wade Davis time, right? Apparently not. Lackey stayed in the game, and what followed was an example of what frequently happens when pitchers that allow home runs at a higher rate than anybody else in the league face off against elite, dinger-mashing hitters:

That’s a walkoff, three-run homer for Turner to give the Dodgers a 4-1 victory and a commanding 2-0 lead over the Cubs in the NLCS.

Feel free to blame Lackey all you want, but he should’ve never been placed in this position. The 39-year-old is a below-average (to put it nicely) MLB pitcher at this stage of his career and performed like below-average pitchers perform. Even with how awful the Cubs’ bullpen has been this postseason, Lackey still shouldn’t be used as anything but a guy that can give you a few innings if a starting pitcher has a short outing or if the game goes to extras.

And Lackey sure as hell shouldn’t be anywhere near the ninth inning of a tied NLCS game, with Justin Turner batting and the winning run at second base. And especially when Wade Davis is sitting right there in the bullpen!

After the game, Joe Maddon’s explanation for not using Davis was that he “really just needed [Davis] for the save.”

This is a trap that far too many managers fall into (see: Buck Showalter in 2016) and is classic old-school baseball thinking with flawed logic. Maddon wanted to wait until the Cubs took the lead to bring in Davis to close the game out.

The problem is that you have to get to that point first. Extending the game needs to be the priority, especially when the opposition has a top-10 hitter in baseball at the plate and the winning run in scoring position.

And say you wait for this potential save opportunity with a one-run lead and Davis allows one run. You’re still tied, which certainly is better than losing like you would — and did, obviously — if Turner comes through in the ninth.

Maddon also spoke specifically about letting Lackey face Turner, and said that “nobody is really a great matchup against Turner, so it just did not work out.”

“Once that walk occurred, then all bets are off against Turner,” Maddon said. “Nobody is really a great matchup against Turner, so it just did not work out.”

Well, sure, nobody is a “great” matchup against Turner. But one pitcher (Davis) allowed a .180/.290/.310 slash line to batters this season, and the other (Lackey) allowed a .252/.316/.469 slash line. One pitcher had an incredible performance that concluded with a nasty pitch to strike out Bryce Harper and send the Cubs to the NLCS, and the other had a terrible year and didn’t even pitch in the NLDS. Saying that “nobody is a really great matchup” is lazy reasoning when this time of the year should have a team doing every possible percentage thing to swing the odds in their favor.

Now, the Cubs’ offensive deserves plenty of blame for the Game 2 loss; it’s hard to win when you only score one lousy run. But hitting Rich Hill, Brandon Morrow, and Kenley Jansen is extremely difficult. What should not be extremely difficult is figuring out that Wade Davis should be facing Justin Turner in the ninth inning with the winning run in scoring position. And, if Davis is in the game, the odds are very good that the Dodgers finish nine innings with only one lousy run themselves.

The series now heads to Wrigley Field, where the Dodgers had their season end in the NLCS last year. They will have the opportunity to end the defending champions’ season this time around if they can take two of three at Wrigley. Game 3 is on Tuesday night (9:00 PM ET; TBS), with Yu Darvish the scheduled starter for the Dodgers and Kyle Hendricks scheduled to go for the Cubs.