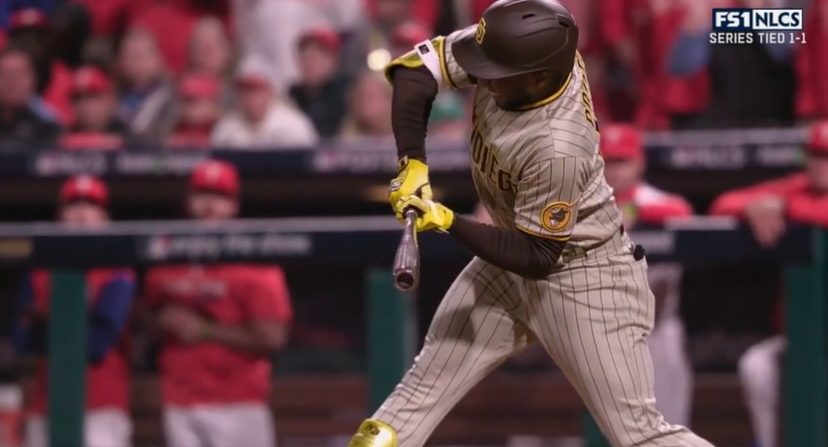 Controversy erupted in the top of the ninth inning in Game 3 of the NLCS between the San Diego Padres and Philadelphia Phillies.

Philadelphia led 4-2, but San Diego’s Josh Bell opened the inning with a single, bringing Jurickson Profar to the plate as the tying run. Phillies reliever Seranthony Domínguez struck Profar out. But much like Giancarlo Stanton’s strikeout in the ninth inning of Game 2 of the ALCS, it was heavily disputed.

Profar worked a full count against Domínguez. The 3-2 pitch was inside, and while Profar began to offer at it, he checked his swing — or at least attempted to. Third base umpire Todd Tichenor ruled that Profar had gone around. Profar quickly protested the call and seemed to get away with throwing his helmet down and motioning toward Tichenor. But when Profar kicked his helmet and cursed at Tichenor, he was ejected by home plate umpire Ted Barrett.

This Jurickson Profar check-swing was ruled strike 3 instead of ball 4.

Profar was ejected after showing his frustration over the call. ⚾️👮 #NLCS pic.twitter.com/IWhwDgH1f1

This brought about a divided response.

Plenty of observers felt that this was just another example of MLB umpires blowing a call and making the game about themselves.

Congrats to the @MLB for giving the game to the Phillies, that was a check swing and everyone knows it. That guy wasn't throwing strikes https://t.co/ZeSUQj1kui

9th inning. Game on the line. Ump makes it about himself. Just terrible stuff. https://t.co/gBuvGGwAh0

Again—and againandagainandagain—umps show complete incompetence. Ruining sports, not baseball only. Every sport. They are horrific. https://t.co/i10HKuORkY

On the other hand, several fans felt that Tichenor made the right call.

Umpire made the right call. He went around, sorry! See you tomorrow 😁 https://t.co/v3MBF0NGbA

Tough but definitely the right call on the Jurickson Profar check swing pic.twitter.com/4W0Kc7xd5G

Lol Profar went around and it wasn’t close, go take a shower.

And of course, there was also concern about the most important issue. That there might have been a youngster who heard a bad word leave Profar’s mouth, rather than the sounds of the 40,000 screaming fans at Citizens Bank Park.

“Showing his frustration” sure pal. He yelled F-U in front of all the children in the stands

In all seriousness, Profar should have been ejected and there’s not much of an argument on that. As far as the call that triggered the argument and subsequent ejection, that’s a tough issue.

The truth is, this was a tricky call. If Tichenor had called the pitch a ball, Domínguez and the Phillies would have been arguing. And as color commentator John Smoltz noted on the FS1 broadcast, the fact that Profar was simultaneously trying to check his swing and get out of the way of the pitch didn’t help his cause.

Profar getting ejected ended up having no significance on the rest of the game. Once Profar finally got off of the field, Domínguez got Trent Grisham to pop out, then struck Austin Nola out to close out Philadelphia’s 4-2 win. The Phillies lead the best-of-seven series 2-1.