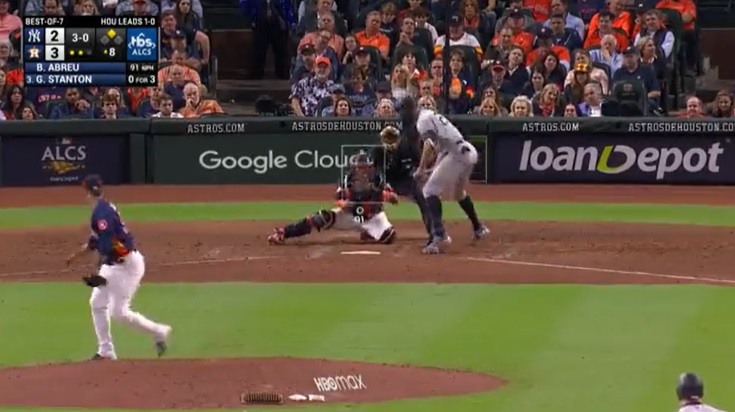 For the New York Yankees, the top of the eighth inning of Game 2 of the ALCS against the Houston Astros will be remembered for its near misses. Aaron Judge narrowly missed a go-ahead home run and one hitter later, Giancarlo Stanton struck out to end the inning. Only, it wasn’t without controversy.

Had Abreu gone on to walk Stanton, that wouldn’t have been such a big deal. But that didn’t happen. Abreu came back with a pair of strikes to retire Stanton, ending the inning.

HORRENDOUS 3-0 call there on Stanton, and that Judge out at the wall will haunt me for years when the Yankees lose. #RepBX

Bad call on Stanton in a 3-0 count gets Abreu back in the count and the #Yankees strand the tying run. pic.twitter.com/z90WDYwX5N

That 3-0 pitch was ball four to Stanton. Should’ve had a walk. Potential game changing call. In 2022 it is absolutely asinine that there is no accountability for horrific umpiring.

As far as the miss goes, we’ve definitely seen worse. It was a fast-moving pitch with a lot of downward movement. Reyburn missed the call but we can easily see how it happened. But there are two factor’s that make Reyburn’s mistake hard to stomach.

One is obviously the setting. A bad call in the playoffs is going to stick out like a sore thumb, especially late in a one-run game.

Here, though, Abreu was either struggling to find the zone against Stanton or was intentionally pitching around him. In either circumstance, an umpire usually wouldn’t be looking to call a strike in this circumstance. The 3-0 pitch was also low, just like the three pitches before it were.

The call ended up being huge. Josh Donaldson drew a two-out walk for the Yankees in the ninth inning, but pinch hitter Matt Carpenter struck out to end the game.

The Houston Astros take a 2-0 lead in the ALCS and are 5-0 in the MLB postseason! ⚾️🔥 pic.twitter.com/xHJlaM5kOy

While it appeared as though Carpenter might have checked his swing, later replays showed it to be the correct call.

The series will now shift to New York, where the Yankees will realistically likely need to win all three games to have a real chance at coming back.