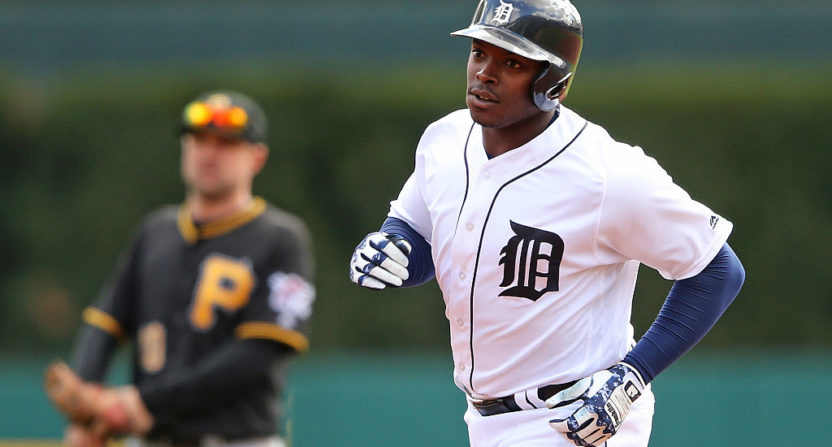 The Los Angeles Angels have had an odd season. They entered the year with generally low expectations but some sleeper potential, before stumbling to a sub-.500 start despite super-human performance from Mike Trout. Their playoff hopes seemed to dissipate when Trout got hurt in late-May… except that they played better without the reigning MVP, sticking in contention until he got back in July. Now, despite a starting rotation full of guys you surely cannot name, Mike Scioscia’s team is among the leaders in a vexing American League wild card race, a game and a half back of the Twins for the second spot, as of this writing.

Well the Angels’ playoff hopes got a nice boost Thursday, when they acquired All-Star outfielder Justin Upton from the Tigers in exchange for minor league pitcher Grayson Long and a player to be named later or cash considerations. Upton is quietly having a renaissance year, batting .279/.362/.542 and ranking sixth among AL position players in Wins Above Replacement, per Baseball-Reference. And next to the dudes the Angels have used in left field over the past three seasons, Upton looks like Babe Ruth.

To make room for Upton on the roster, the Angels dealt Cameron Maybin to Houston. Maybin had scuffled after a strong start to the year but still leads the American League in stolen bases.

Upton might have been traded sooner if not for the uncertainty around his opt-out clause, which will allow him to walk away from four years and $88 million after this season, if he chooses. But according to MLB Network’s Jon Morosi, Upton was likely to opt out if he had stayed in Detroit, given that the Tigers are due for a rebuilding process, making him expendable for Detroit and affordable for other teams. It stands to reason he’d be more likely to stick with the Angels, though given how strong a year he’s having it would be tough to blame him for taking his chances in free agency. The Angels will be fine either way; they have money coming off the books this winter, so they can afford him if he opts into the rest of his deal, and if he opts out they can simply move on.

The Angels’ acquisition of Upton was pleasing for many neutral baseball fans who simply want to see Mike Trout in the playoffs. The best player in baseball has cracked the postseason only once, in 2014, when his team was swept and he went 1-for-12. Of course, adding one player for one month can only make so big a difference, but in a race as close as the AL wild card chase every home run counts. Truthfully, very little separates the deeply flawed rosters of the Angels, Twins, Orioles, Rangers, Rays and Mariners. One outfielder with .900 OPS could truly put the Angels over the top.