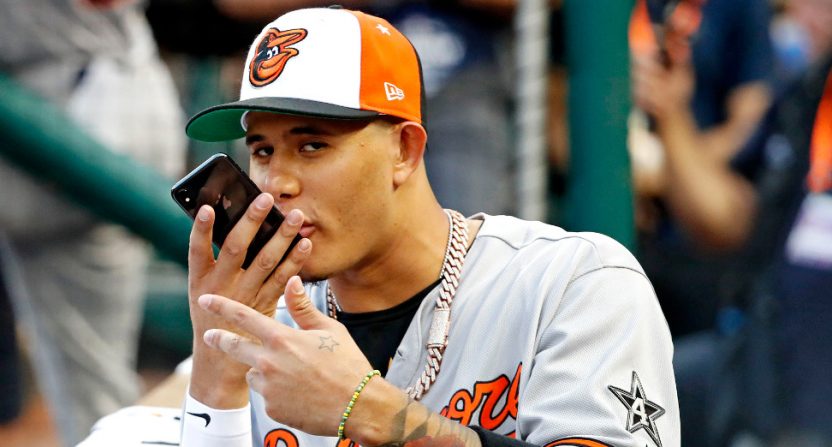 It’s been long expected that Baltimore Orioles’ shortstop Manny Machado would be heading to the Los Angeles Dodgers, with that even coming up during the All-Star Game broadcast Tuesday night, but the deal became official Wednesday. In return for Machado, the Dodgers are sending the Orioles five prospects, led by double-A outfielder Yusniel Diaz and also including double-A pitcher Dean Kremer, class-A pitcher Zach Pop, class-A infielder Rylan Bannon and triple-A utility player Breyvic Valera. But there are plenty of takes on if that was enough of a return or not. First, Yahoo’s Jeff Passan argued that the Orioles did pretty well:

The return to the Orioles for Manny Machado: OF Yusniel Diaz, 3B Rylan Bannon, RHP Dean Kremer, RHP Zach Pop and 2B Breyvic Valera.

Diaz is the only top-100 type. Kremer could be a dude. Bannon undersized 3B crushing in Cal League. Pop is a reliever, Valera 26-year-old in AAA.

Rarely is there a consensus in deals like this, but every evaluator I've asked thinks Baltimore did well in Manny Machado trade. Also think with the strong market — Brewers, Phillies, Diamondbacks and others — and deep system the Dodgers could overpay. Mutually beneficial deal.

FanGraphs’ Dan Syzmborski also offered a take along those lines:

I can't believe I'm saying this, but the Orioles did not screw this up. No, the Orioles didn't pillage the Dodger farm system, but they never were for 11 weeks of Manny Machado.

And The Athletic’s Ken Rosenthal noted that this return is only for half a season of Machado, as he’s a free agent after the year:

When assessing #Orioles’ return for Machado, remember that #Dodgers only are acquiring him for 66 games (plus potential postseason). Diaz, 21, was batting .314 with a .905 OPS at Double A. Rival exec: “Super talented, good player, a legit guy to get back for a rental.”

So this doesn’t seem terrible for the Orioles, all things considered. But they are going to be tough to watch this year:

How low could the Orioles go?

Take away Machado and their position players have combined to hit .217 with a .278 OBP this season pic.twitter.com/Qj3QAHMjok

We’ll see how this deal works out for everyone in the end. But at the moment, it seems like something that could help both teams. The contending Dodgers acquired one of the best players in the game, and did so without giving up anyone on their major-league roster. Meanwhile, the Orioles pulled in a reasonably-decent return for a half-season rental. If those prospects turn into anything, it will look even better for them. But even if the prospects don’t work out, Baltimore certainly wasn’t in contention this year, and Machado probably wasn’t sticking around after that. We’ll see how it winds up, but this is a deal that could work for both sides.