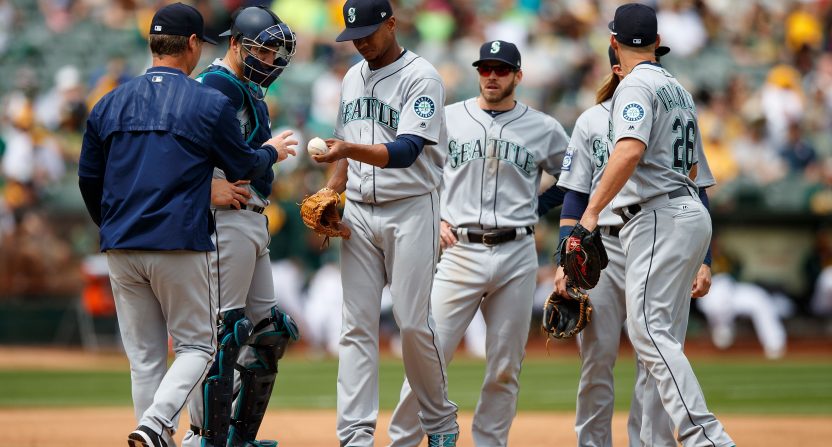 It’s a story seemingly as old as time. The Mariners have a good year and just miss out on the playoffs. The following offseason, they hype machine builds them up. The end of the longest playoff drought in baseball is sure to come to an end this time, everyone says. But it doesn’t. Another season goes by, and Seattle is still looking for its first postseason appearance since 2001.

At 13-17 and already seven games back of first place in the AL West, the 2017 Mariners appear in danger of repeating this pattern once again.

As baseball fans know, Seattle won a record 116 games in 2001 but fell to the Yankees in the ALCS. Somehow, they haven’t made it back to the postseason since, despite winning 93 games in each of the following seasons. Fifteen years without a playoff berth has to include some bad luck, and it certainly has. Seattle has won 85 or more games six times, but have come up short each time. Just when it looks like the Mariners are on the cusp and ready to break through, they manage to disappoint the next season.

Lets go back to the present. Seattle underwent massive change before 2016 and went 86-76, finishing just three games out of a wild card spot in year one with general manger Jerry Dipoto and new manager Scott Servais.

So coming into 2017, the question was whether Seattle would finally break through or if we’d see another letdown. Early returns seem to indicate the latter. In years past, we’ve come to the conclusion that too much was expected of Seattle after a good season. That’s the reflexive way to look at the team’s slow start. But this year, I’m not so sure I agree.

These aren’t the same old Mariners. Jerry Dipoto took a team with a competitive core but not a ton else and managed to assemble impressive depth without sacrificing a key cog. It has taken lots of trades and roster moves to do that. Lots and lots of trades. Seriously, Jerry Dipoto acts as though he needs to make trades in order to stay alive like Chev Chelios in Crank.

But I don’t think many have complained about the returns on paper. He turned Taijuan Walker and Ketel Marte into Mitch Haniger and Jean Segura. Drew Smyly and Yovani Gallardo were added to a rotation that too often has relied wholly on Felix Hernandez and Hisashi Iwakuma. Carlos Ruiz is there to spell Mike Zunino behind the plate. Taylor Motter and Jarrod Dyson (along with the aforementioned Haniger) were added to an outfield that already included plus-defenders in Guillermo Heredia and Leonys Martin.

So what gives? Lets just say bad luck is actually the culprit this time. In the past, Seattle may have outperformed expectations and given fans more hope than was probably warranted. But I don’t think 87 wins and a wild card berth (their preseason PECOTA projection) was too much to ask for given the roster heading into the season.

You don’t have to look much further than the current disabled list to see. Many of the guys mentioned earlier are hurt, and depth can only stretch so far. Haniger, who currently leads the squad in bWAR, is sidelined with an oblique strain. Drew Smyly is on the 60-day DL. King Felix and Iwakuma are hurt as well.

So the Ms have been forced to dig into every bit of the depth that Dipoto spent the last year and change acquiring. Ariel Miranda pitched seven innings of two-run ball in a win Thursday, but I don’t think the front office was expecting him to be tied for the team-lead in starts at this point.

Combine that with less-than-expected production from some of the guys they were counting on this year. Kyle Seager has a .710 OPS and one homer through 26 games. Edwin Diaz was record-setting in his promotion from Double-A, but has scuffled some in year two.

But all is not lost. The AL West-leading Astros are the only team in the division with a winning record at the moment. It is way too early, but Seattle is just three games out of a wild card spot.

So the Mariners are off to a slower start than many had hoped. They might miss out on the postseason again. But it’s not because we got too excited about them to start to the season.

Unfortunately, it’s what we have too often come to expect from Seattle.