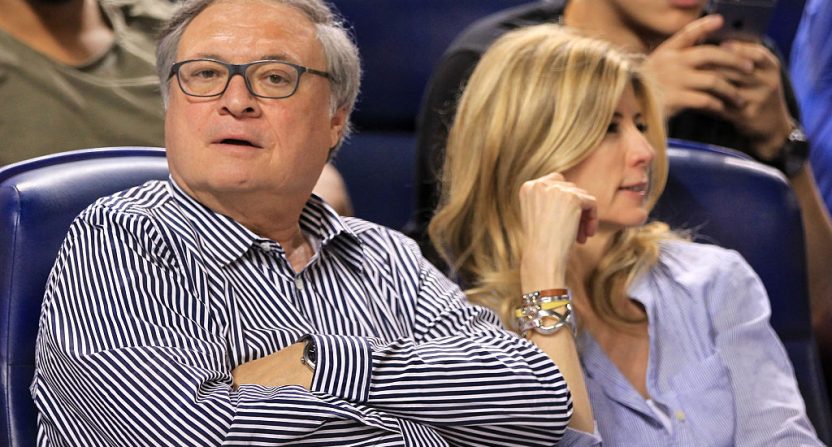 On Thursday morning, Forbes broke the news that Miami Marlins owner Jeffrey Loria had a handshake agreement to sell the team for $1.6 billion.

Of course, mainly baseball fans on social media reacted with glee, because Loria is a sleazy, underhanded owner that deserves nothing good in life (well, aside from the $1.6 billion he’d get from selling his team).

There’s just one problem with the potential sale – it’s not going to happen. Here’s the key point from the Forbes report that everyone seems to be glossing over.

My sources would not say who the $1.6 billion handshake agreement was with other than he is a real estate developer based in New York City. The problem, according to these sources, is the potential buyer is not liquid, meaning he does not have the cash to buy the Marlins because his net worth is tied up in real estate. Thus, for the real estate developer to purchase the Marlins would likely require more debt than MLB would be comfortable with.

The report cites the Dodgers sale to Guggenheim Partners as a similar sale, but to me, that’s not the first thing that came to mind.

No, when I heard “net worth tied up in real estate”, I thought of one name – Frank McCourt.

McCourt’s purchase of the Dodgers for just $430 million in 2004 was a disaster and a half. A third of the purchase price was financed by a loan (from Fox, who was selling him the team to begin with). Boston parking lots were used as collateral for the loan. McCourt eventually divorced his wife (the Dodgers CEO) and received a loan from future Fox TV rights just to make payroll.

It’s impossible to know if this anonymous buyer will run into any of the same issues as McCourt did when buying the Dodgers more than a decade ago. But when I see “not liquid”, “tied up in real estate”, and “more debt” referring to a potential buyer, I don’t see a sale that MLB would approve, even if the end result would have Loria out of the game.

That being said, once the Marlins host the All-Star Game this July, a sale of the team seems more likely than not, which Clark Spencer of the Miami Herald confirmed on Thursday.

“He’s going to sell it, no doubt about it,” said one team official, who spoke only under the condition he not be identified.

Spencer also cites Miami trading several top prospects over the last year and bulking up on short-term payroll as possible indicators that Loria is thinking about the short-term rather than the long-term.

So to summarize – Loria is going to end up selling the team sooner rather than later, but I highly doubt it’ll be to this New York real estate mogul for $1.6 billion. There’s simply too much working against that bid for it to be successful.