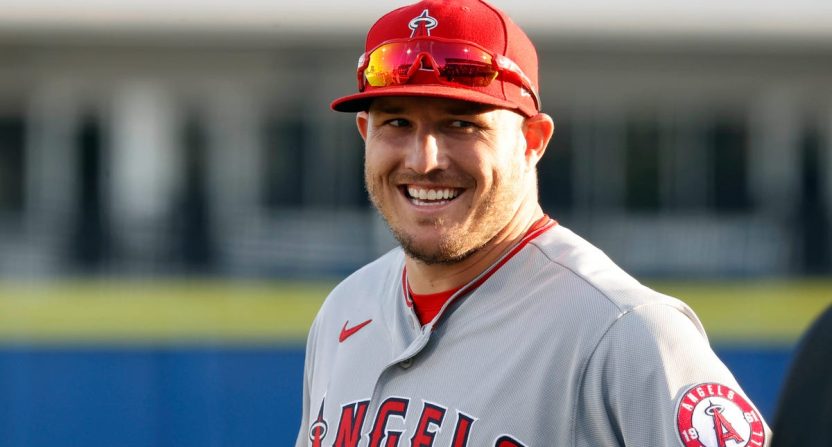 Los Angeles Angels star Mike Trout usually finds himself in the middle of a media scrum because of something he did on the baseball field. On Wednesday, however, he found himself surrounded by reporters because of his fantasy football league.

Trout was outed at the commissioner of the fantasy football league at the center of the Tommy Pham–Joc Pederson drama on Tuesday. Pham said the drama that included his slap of Joc Pederson started because Trout failed to handle his responsibilities as commissioner.

“Trout did a terrible job, man,” Pham said, laughing, per Bobby Nightengale of The Cincinnati Enquirer. “Trout is the worst commissioner in fantasy sports because he allowed a lot of (stuff) to go on, and he could’ve solved it all. I don’t want to be the (bleeping) commissioner; I’ve got other (stuff) to do. (Trout) didn’t want to do it. We put it on him, so it’s kind of our fault too because we made him commissioner.”

Trout responded on Wednesday, playfully answering questions about the drama, though with his patented reticence to dig into it too much.

“We’re all passionate about fantasy football”

Mostly no comments about the league rule disagreements, said he is not sure if he will step down as commissioner

“All commissioners get booed” pic.twitter.com/7wjdS82cnz

“I talked to Tommy. I talked to Joc. Everybody that’s a part of it,” said Trout. “We’re all passionate about fantasy football.”

When asked if he planned to resign as commissioner of the league, he declined.

“Every commissioner I know always gets booed,” said Trout.

The drama surrounding the original slap continues to get more and more absurd as now we’re digging into the details of a fantasy football league for pro baseball players. Some people are enjoying the stupidity of the news cycle while others bemoan it for being a waste of time. Regardless, the involvement of Trout and his comments on Wednesday has a lot of people around baseball talking.

btw, Mike Trout is actually an excellent commissioner for fielding all this nonsense bc Pham was talking shit — rule one of fantasy sports, you don't take league squabbles out of the league chat!

This is the most interesting Mike Trout has ever been and of course middle man Mike won’t comment on it https://t.co/JoNEFFTraN

We all have our weaknesses https://t.co/J99fTnBHSg

The seriousness with which this whole thing is playing out will never not be funny to me. https://t.co/R5NY81rIS2

This is the story we need right now … https://t.co/SGLew8ni0F

This story could have gotten squashed with a no comment from all sides and I'm so glad that it didn't https://t.co/Z9JzqEIBpR

This story is gloriously absurd and no one in baseball media should let it die. https://t.co/s48OVms80Z

I love how this continues to get more and more ridiculous. https://t.co/xtfGg7sNsU

Let’s see what wonders await us tomorrow on this story…