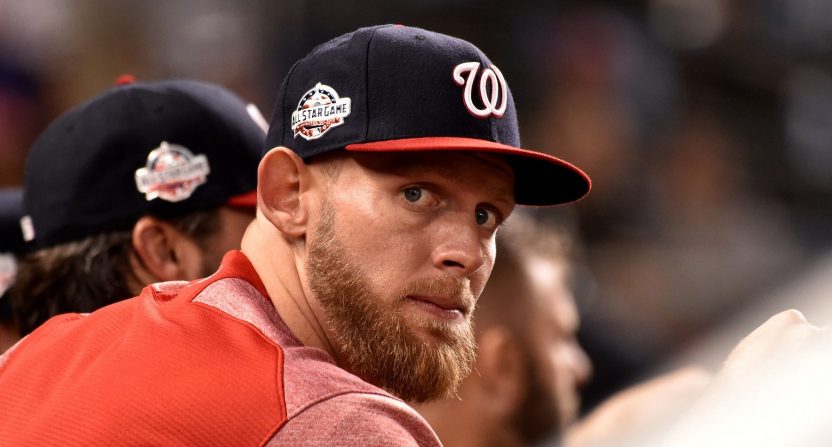 Last week’s news that Stephen Strasburg suffered a setback in his recovery from nerve irritation in his neck wasn’t promising for the veteran pitcher nor the Washington Nationals. Unfortunately, subsequent developments have brought even worse news.

Strasburg will undergo neck surgery that will end his 2021 season and could put his career in uncertainty. He was diagnosed with neurogenic thoracic outlet syndrome, which results in compressed nerves that typically cause tingling, numbness, and weakness in the fingers and hands.

As a 2008 St. Louis Post-Dispatch article explained, the condition typically develops from a rib pressing on a nerve or artery, causing a lack of circulation. In more severe instances, pain, swelling, scar tissue, and blood clots can develop. Pitchers are particularly susceptible to this disorder because of their repetitive throwing motion and thicker shoulder muscles.

Other major-league pitchers who have had surgery for thoracic outlet syndrome include Matt Harvey, Chris Carpenter, Aaron Cook, Phil Hughes, Josh Beckett, Matt Harrison, Jeremy Bonderman, and Jaime Garcia, And in several of those cases, those pitchers never returned to the same level of performance after the surgery.

As MASN Sports’ Mark Zuckerman noted, Strasburg has previously dealt with numbness in his right hand. His 2020 season was cut short after just two starts and he underwent carpal tunnel surgery. Considering what Strasburg is dealing with now (and a nerve issue in 2018), it’s entirely possible that he’s been suffering from thoracic outlet syndrome for some time.

Strasburg arguably had the best season of his career in 2019. During the regular season, he compiled an 18-6 record and 3.32 ERA with a career-best 251 strikeouts in 209 innings (his second-highest total in 12 major-league seasons). That was followed by an outstanding postseason in which he added another 36 1/3 innings, going 5-0 with a 1.98 ERA and 47 strikeouts on his way to winning World Series MVP.

The Nationals were 6-0 in games in which he pitched in those playoffs.

Since then, however, Strasburg has made seven starts for the Nationals, throwing a combined 26.2 innings with a 6.75 ERA and depriving the Nats of an ace-level pitcher. Though it’s likely he’ll be able to return to the mound, the question is whether or not he’ll be as effective a pitcher. At 33 years old, with a history of injuries, and a previous reconstructive elbow surgery on his right elbow. maybe the years of strain have taken their toll on Strasburg.

Strasburg was the No. 1 overall pick in the 2009 MLB Draft out of San Diego State. He debuted the next season with a phenomenal performance, compiling a 2.91 ERA, 5-3 record, and 92 strikeouts in 68 innings. But Strasburg was set back by shoulder inflammation and eventually tore a ligament in his right elbow that required Tommy John surgery. For the past 10 seasons, his pitching brilliance has been curtailed by frequent injuries.

These are the 8 teams known to be in on Max Scherzer, via multiple sources:

Also heard Yankees checked in & were told he was unlikely to OK a trade there. Mets could be a long shot for the same reason.

For the Nationals, the news on Strasburg is yet another blow to their 2021 season. Washington went into Tuesday’s play with a 45-54 record and fourth-place standing in the National League East, 8 1/2 games behind the New York Mets. The wild-card standings are even worse for the Nats, where they’re 11 1/2 games out of the race.

Max Scherzer is a near-certainty to be traded if he’s recovered from triceps inflammation in his right arm. Several contenders including the Dodgers, Padres, Giants, Rays, and Red Sox will pursue him to bolster their starting rotations and improve their chances at contending for a World Series title.

Trading Scherzer will deplete a starting rotation that was already missing Strasburg, Joe Ross, and Erick Fedde. Additionally, outfielder Kyle Schwarber — the Nats’ top slugger with 25 home runs — has been out with a hamstring injury for most of July. Catcher Yan Gomes is on the injured list with a strained oblique. And shortstop Trea Turner was taken out of Tuesday’s game after testing positive for COVID-19.