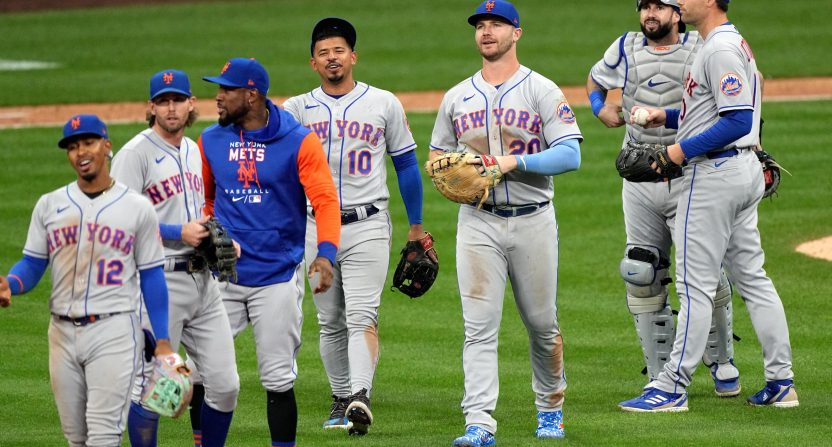 For the first time since 2016, the New York Mets are heading to the MLB Playoffs. The team clinched their postseason berth on Monday night following a 7-2 win over the Milwaukee Brewers.

The New York @Mets are headed to the playoffs!!

While the Mets have been dealing with the surging Atlanta Braves while also working through some struggles of their own, they’ve put themselves in a position where they continue to maintain a lead in the National League East and find themselves, for now, in the No. 2 spot in the NL behind the Los Angeles Dodgers.

The playoff-clinching win also coincidences with the return of Max Scherzer, who threw six perfect innings before being pulled over concerns about his oblique injury. Even so, it ended up being the 200th win of his career. Pete Alonso added to the fun, hitting a three-run home run and giving himself 118 RBIs on the season, which is just shy of the club record of 124, shared by Mike Piazza and David Wright.

However it ends, Mets fans are excited to get back into the playoffs and the MLB world had some fun reactions to the news on Monday.

The job is not done but enjoy the hard work. #TheseMets | #LGM pic.twitter.com/GF0u6Im0SJ

I love this team! Now, let's get the division. #LGM https://t.co/hnroY44StZ

Buck Showalter fairly low key tonight, but says: “If we win the division you will see me do something stupid.”

One of the best Mets teams in my lifetime https://t.co/ZHeu7HMQxV

Thinking about some Mets who are going to get postseason shares. Yolmer Sanchez, you're getting a share buddy. Nick Plummer, you'd better believe you're getting a damn playoff share. Alex Claudio, set up your direct deposit.

The Mets are officially in the playoffs. A very subdued reaction from the team. They know there's a lot more to play for in the regular season with the division up for grabs. Congratulations to Max Scherzer on win number 200. He was ridiculous tonight.

It's a subdued celebration on the field for the Mets. The infielders and outfielders are hugging each other, but there is no dogpile or anything like that.

The Mets intend to recognize this playoff clinch, while also understanding that greater goals remain.