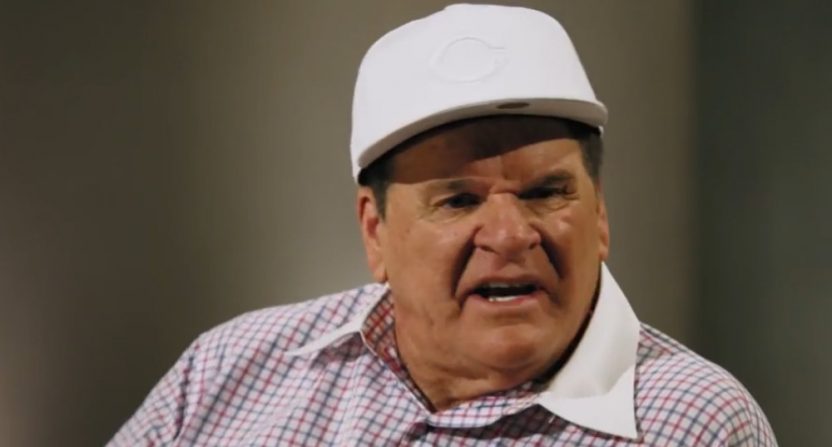 The Philadelphia Phillies celebrated the 1980 World Series championship team that beat the Kansas City Royals during the franchise’s alumni weekend this weekend. And one of the memorable and most controversial members of that team, Pete Rose, was in attendance in the city of brotherly love for the first time since receiving a lifetime ban from MLB in 1989.

The franchise originally planned to celebrate the “hit king” more than four years ago, but scrapped those plans after a woman claimed in federal court documents she had a sexual relationship with Rose during his time in Cincinnati. She said that began in 1973 when she was 14 or 15 and he was 32. Rose admitted to the sexual relationship in a response, but said he believed she was 16, the age of consent in Ohio. Rose was married with two kids at the time.

Prior to the start of the Nationals-Phillies game at Citizens Bank Park Sunday, a reporter from The Philadelphia Inquirer asked Rose whether his appearance sends a negative message to women. Instead of addressing the question, the 81-year-old Rose dismissed it entirely, saying that was over “55 years ago.”

“It was 55 years ago, babe,” Rose told Alex Coffey, a female baseball writer for the Inquirer.

I asked Pete Rose what he would say to people who say his presence here sends a negative message to women. His response: “No, I’m not here to talk about that. Sorry about that. It was 55 years ago babe.”

It’s unclear what Rose means by “over 55 years ago.” The major allegations against the 17-time All-Star stem from a woman who claimed in 2017 Rose had called her in 1973 (49 years ago) when she was just 14 or 15 — beginning a sexual relationship that lasted several years. She also alleged Rose met her in locations outside Ohio for sex.

Rose’s lawyer called her claims “unverified” despite his client admitting to the relationship, but said it started when she was 16, and said they never had sex outside Ohio.

In 2017, Rose lost his gig with Fox Sports following the news of those allegations.

The Phillies defended their decision to invite Rose to participate in the ceremony, citing that all his former teammates wanted him in attendance because there wouldn’t be a World Series ring without him.
“In planning the 1980 reunion, we consulted with Pete’s teammates about his inclusion,” the Phillies said in a statement. “Everyone wants Pete to be part of the festivities since there would be no trophy in 1980 without him. In addition, the club received permission from the Commissioner’s Office to invite Pete as a member of the championship team.”

Rose got 826 of his 4,256 hits during his five seasons playing for the Phillies.

Despite the allegations, it seems like the fans in attendance still have a lot of love and appreciation for Rose, giving him a standing ovation during the festivities.