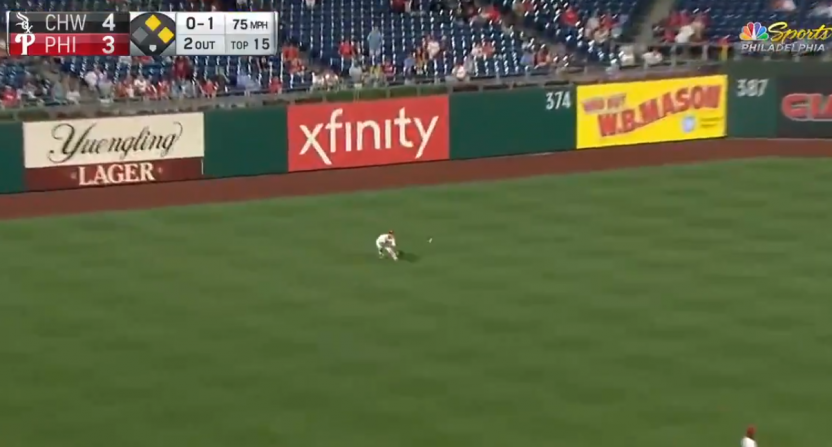 With the Phillies and White Sox playing deep into extra innings tonight, we got some typical #weirdbaseball happenings. For example, the Phillies ended up having to use outfielder Roman Quinn to pitch two innings, which cost them when he gave up what ended up being the winning run for the White Sox.

But in addition to that, Philadelphia had to go to an even greater extreme: using a pitcher as a position player. Vince Velasquez started Wednesday’s game, giving up two runs in five innings in a loss to the Giants. Tonight, unavailable on the mound, he entered as a pinch runner in the bottom of the 13th representing the winning run. That inning ended with a pop-up, but Velasquez had to stay in to play left, while Quinn attempted to keep the Phillies close.

.@vjvelasquezrhp has averaged 94.5 mph on his fastball from the mound this season …

That play helped preserve the tie, and after the Phillies were unable to score in the bottom of the 14th, Velasquez again had a chance to keep things 3-3 on a single from Abreu, but with the much faster Leury Garcia heading home Velasquez was unable to notch a second assist, despite an even better throw. Then when the very next batter scalded a line drive to left, Velasquez made an incredible diving play to end the inning and keep the deficit to one run.

What a sequence of plays. The numbers backed them up, too:

Vince Velasquez's diving play in LF — which had a 15% catch probability, per Statcast — is the first 5-star catch by a Phillies outfielder this season.

What a performance from Velasquez, who should maybe be penciled in as a possible late-game defensive replacement going forward. Okay, no, he shouldn’t be. Although given how modern MLB teams love nothing more than to carry as many pitchers as possible, this could actually end up happening. Regardless, that’s a hell of a night for a guy who probably came to the park with zero intention of playing.