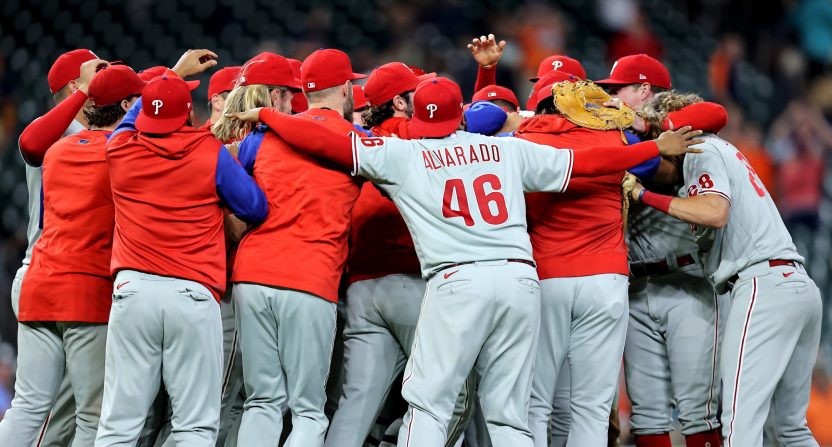 With their magic number at one, it looked as though the Philadelphia Phillies would clinch a playoff spot on Monday with a loss from the Milwaukee Brewers. That didn’t happen. The Brewers came from behind to defeat the Arizona Diamondbacks in extra innings. Ultimately, though, the Phillies didn’t need that help. They got the result they needed in their own game against the Houston Astros.

Philadelphia’s Aaron Nola flirted with a perfect game for much of the night but that was broken up in the bottom of the seventh on back-to-back singles from Yordan Álvarez and David Hensley. José Alvarado relieved Nola and retired Kyle Tucker, preserving the slim 1-0 lead. The Phillies added to that in the top-of-the-eighth, when Bryson Stott and Kyle Schwarber led the inning off with back-to-back home runs. That 3-0 lead was all that Philadelphia would need.

After Zach Eflin got Christian Vázquez and Aledmys Díaz out to start the inning, he needed only to retire Mauricio Dubón for the Phillies to clinch their first playoff appearance since 2011. Eflin did just that, getting Dubón on a flyout to centerfielder Brandon Marsh.

The Philadelphia Phillies are going to the postseason for the first time in 11 years! ⚾️ pic.twitter.com/TfWKGk6oHo

This has been a season of long postseason droughts getting snapped. The Seattle Mariners hadn’t reached the playoffs since 2001, which was easily the longest drought in the league. Seattle’s win on Friday clinched a playoff spot and shifted the longest drought to the Phillies.

With Philadelphia’s win, that drought, too, is no more.

The two longest playoff droughts in MLB entering this season (Mariners since 2001, Phillies since 2011) are now both snapped.

The Tigers and Angels (both last made playoffs in 2014) now own the longest active postseason droughts in MLB. pic.twitter.com/EZiOmu3btW

The MLB world had a lot to say about the Phillies clinching their first playoff spot in more than a decade.

the Philadelphia Phillies have made the playoffs. pic.twitter.com/W38ymhLI4U

4,014 days. Six managers. 893 losses. The drought is over. The Phillies are going to the playoffs.

Gritty still lived alone , undetected inside the WFC walls the last time the Phillies made the playoffs.

Naturally, the Phillies themselves were also overjoyed.

The six playoff spots in the National League have all been clinched. What the matchups will be remains unknown.

The St. Louis Cardinals are locked into the No. 3 seed. As such, they will face the lowest-seeded National League Wild Card team. At the time of Monday’s win, that was the Phillies. That said, Philadelphia will enter Tuesday no worse than one game behind the San Diego Padres for the No. 5 seed. The Phillies also have the tiebreaker over the Padres. The winner of that battle will face the New York Mets in the first round.

Whichever seed it ends up being, for Philadelphia to get a home playoff game, it will need to win the best-of-three Wild Card series. Those games will all be in either St. Louis or New York.