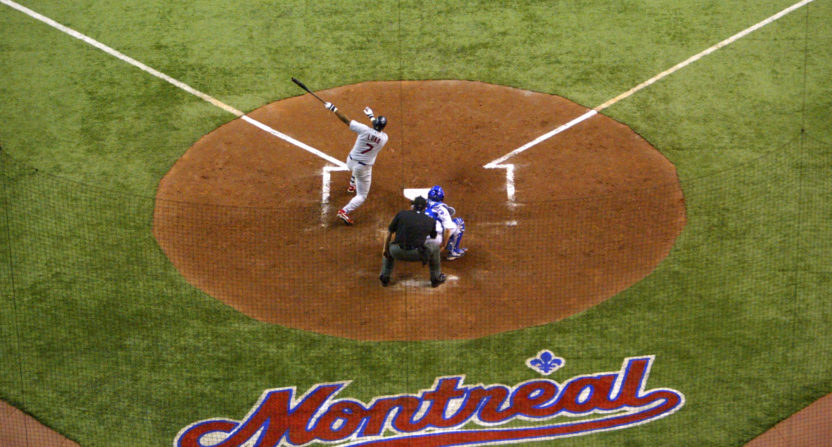 On Monday afternoon, Baseball America’s Tracy Ringolsby dropped a bombshell story – Major League Baseball appears to be looking into expanding from 30 to 32 teams, which would result in drastic realignments for both leagues and changes to the Postseason.

MLB Commissioner Rob Manfred reportedly discussed expansion recently in Seattle, and Portland, Oregon came up as a target for an expansion team.

In September, the folks in Portland, Ore., were given hope that they, too, could be home to an expansion team when commissioner Rob Manfred, speaking in Seattle, for the second year in a row mentioned Portland as a potential site for a franchise, and was quoted as saying “a team in the West” would be a part of any expansion.

And there is a legitimate ownership group in Portland that has the necessary financing along with support for a stadium, which would be partially funded by a $150 million grant. Approved by the state of Oregon to help finance a stadium when efforts were underway in 2003 to be the site for the relocation of the Expos (who instead moved to Washington, D.C.), the grant is still available.

Portland has been without baseball since 2011, when the AAA Portland Beavers were sold and moved to Tucson (eventually moving again to El Paso), while their home stadium, PGE Park, was converted into a soccer stadium for the Portland Timbers. The Hillsboro Hops, a Northwest League affiliate of the Arizona Diamondbacks, have played in suburban Portland since 2013 after relocating from Yakima, Washington.

Ringolsby went on to explain how expansion with work, assuming teams would be awarded to Portland and Montreal, leading to a massive realignment in both the American and National Leagues with four eight-team divisions.

There seems to be a building consensus that baseball will soon be headed to a 32-team configuration. It will lead to major realignment and adjustments in schedule, which will allow MLB to address the growing concerns of the union about travel demands and off days.

One proposal would be to geographically restructure into four divisions, which would create a major reduction in travel, particularly for teams on the East Coast and West Coast, and add to the natural rivalries by not just having them as interleague attractions, but rather a part of the regular divisional battles.

The proposal would reportedly cut the schedule from 162 games to 156 games, featuring three games against the 24 non-divisional teams and 12 games against the seven divisional teams. Ringolsby’s reported proposal also includes expanding the Postseason to 12 teams from ten, with eight Wild Card teams playing elimination games for the right to advance to the Division Series to face the division champions.

I have no reason to doubt Ringolsby’s reporting, as he’s been around the game for years upon years and is pretty plugged in. But for a game that has been so resistant to change for years, the incredible changes that would be needed after expanding to 32 teams makes me a bit skeptical that it would happen.

I actually think four eight-team divisions would be pretty good for the league. Under Ringolsby’s proposed divisions, the division champions this season would have been the Dodgers, Indians, Astros, and Dodgers, while the four Wild Card matchups would have been Red Sox-Cardinals, Diamondbacks-Twins, Cubs-Brewers, and Rockies-Yankees. Of course, none of those matchups (aside from Cubs-Brewers) are remotely traditional, and the continued muddling of the American and National Leagues could really drive traditionalists up a wall.

I’m sure baseball would love to add a pair of teams to their ranks. However, at the risk of upsetting those traditionalists, I think the league will end up making as few changes as possible – and that’s how you end up with shit like two five team divisions and one six team division per league.

3 thoughts on “Report: MLB expansion, realignment, Postseason changes could be in the works”