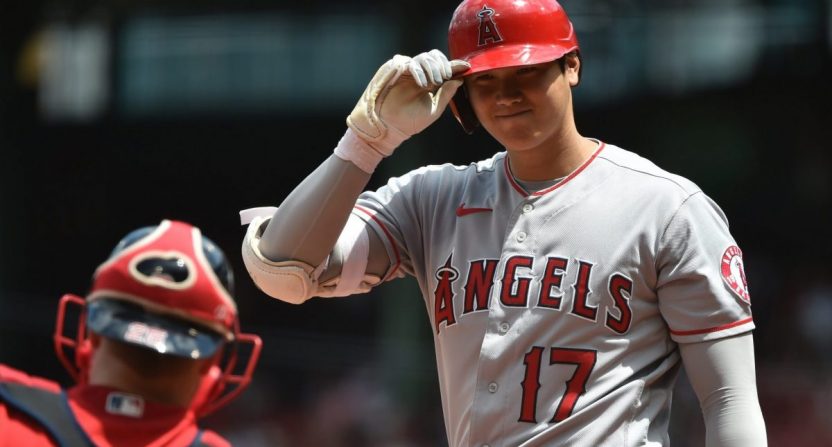 On Friday, Shohei Ohtani hit his 11th home run of the season, going the other way over Fenway’s Green Monster.

Shohei just flicked it over the Monster 😯 pic.twitter.com/xbnUimjTaV

With loft that’s obviously a short fence, but this head-on view of how he just sort of flipped it out is ridiculous.

Shohei is not human. pic.twitter.com/4xy4iRtWss

As fun as that was, it came in a losing effort. Today, he went “deep” to right, pulling one around Pesky’s Pole.

Shohei Ohtani goes deep in the 9th to give the @Angels the lead! pic.twitter.com/Hy9WzEmIvw

That was Ohtani’s 12th homer of the season, and he’s currently tied for the MLB lead. He missed a start on the mound due to fatigue, but this is why he’s such an intriguing and electric player, and it’s why he’s in the lineup as the DH and why he occasionally bats when he’s pitching, too.

The Angels held on to win today, 6-5, meaning Ohtani’s two-run blast was effectively the game-winner. They need all the help they can get, too; a one-run win to avoid a sweep could end up being huge for a team that currently sits fourth in the AL West. Fangraphs has their playoff odds at 22%, which isn’t awful and considering their slow start shows how much the advanced metrics believes in the roster.

But they need to get things turned around very quickly to make a push for even a Wild Card game appearance. Having Ohtani and Mike Trout in the lineup everyday is a good start there, especially if Ohtani is going to keep up this slugging pace.