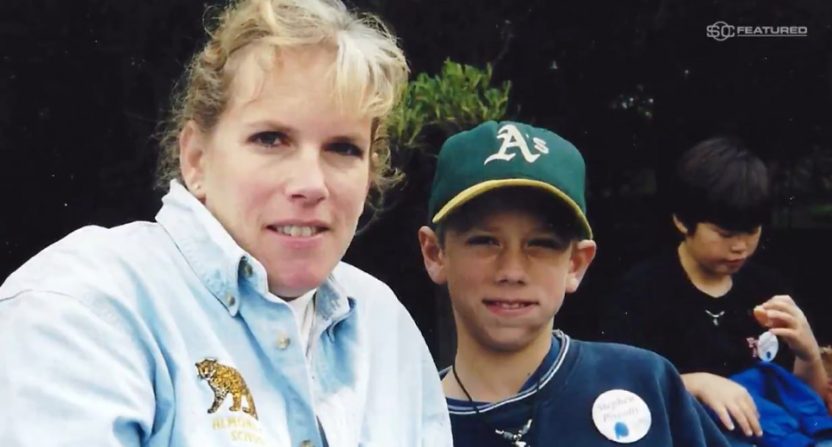 Oakland Athletics’ outfielder Stephen Piscotty’s mother Gretchen passed away at 55 Sunday night, less than a year after she was first diagnosed with amyotrophic lateral sclerosis (ALS). This came after the Cardinals traded Piscotty to Oakland this December in a move at least partly made to let him spend more time with his mother; he’d been living at home with her, along with brother Nick, and youngest brother Austin plays baseball nearby at St. Mary’s.

The 27-year-old Piscotty grew up in Pleasanton, just about 25 miles outside of Oakland, and was a big A’s fan as a child, so heading to that franchise was a return to his roots, but the primary motivation was to let him spend time with his mother. That wasn’t easy, though, as in February, Piscotty told Susan Slusser of The San Francisco Chronicle that it was tough for him to see how difficult things were geting for her:

“It’s relatively hard to watch, to see the progression take place,” Stephen Piscotty said in February. “I feel so bad. I want to put a positive spin on it but there are things that are out of our control and we’re just trying to make the best of a bad situation, and hopefully with what we’re doing we can one day get to a point where other folks don’t have to go through it.”

In January, he talked to Slusser about how he’d play “Amazing Grace” for his mother, in a role reversal from before his birth:

When Gretchen Piscotty was pregnant with her first child, Stephen, she liked to wind up a music-box piano and play “Amazing Grace” for him.

“She thought I could hear it,” the new Oakland A’s outfielder said. “Amazingly, that’s one of my favorite songs. I’ve always loved it.”

n May, Gretchen Piscotty was diagnosed with amyotrophic lateral sclerosis, a neuromuscular disorder also known as Lou Gehrig’s disease. The illness is progressing far more quickly than doctors expected, and Gretchen has lost much of her mobility. Speaking is becoming difficult.

So now it’s Stephen’s turn. He plays “Amazing Grace” for his mother on his guitar and it soothes both of them.

“Whenever I play for her at night, I’ll end with that song and it gives me chills, the good kind, when I play it, as well as a calming peace,” he said. “It’s just crazy the full-circle thoughts and emotions I get when I hear or play that song.”

ESPN also recently did a piece on the Piscotty family, which includes Stephen playing that song for Gretchen:

Piscotty and the A’s have set up a YouCaring fund in his mother’s memory to raise money for the ALS Therapy Development Institute. Here’s a short video he made encouraging people to donate:

As of 5:30 p.m. Eastern Monday, that campaign had already raised over $25,000 of its $100,000 goal, and the A’s have promised to match up to $50,000. And one of those donations came from a surprising source; Chicago Cubs’ pitcher Yu Darvish, who chipped in $10,000 and also retweeted Slusser’s tweet with the link. A fan praised his generosity, and Darvish said “We are all family.”

We are all family:)

It’s cool to see an opponent who’d never played with Piscotty chip in that way, and it does perhaps speak to the strength of the wider baseball community. As do the expressions of support from the A’s and the Cardinals, and the trade they made to help him spend more time at home in the first place. This must be an extremely difficult time for Piscotty and his family, but it’s encouraging to see the widespread support they’re receiving. And maybe these donations will help lead to significant progress in the fight against ALS, so that others don’t have to go through this.

[The San Francisco Chronicle; screengrab of a young Stephen Piscotty with Gretchen from ESPN’s piece]