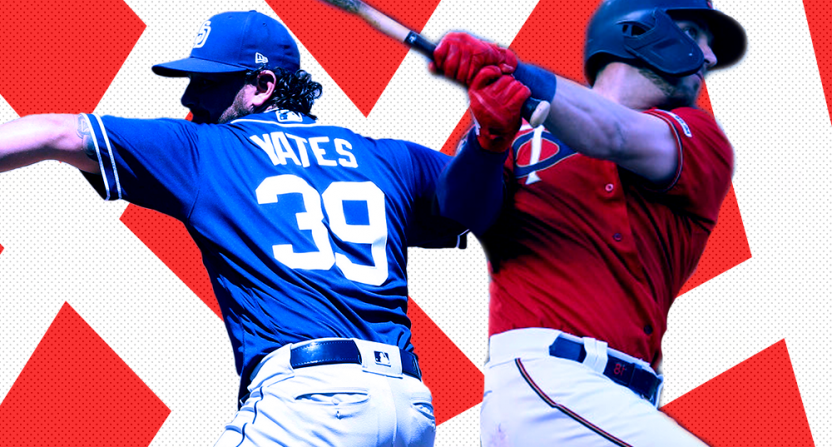 The MLB season is now a couple of months old, and it’s becoming clearer and clearer which players are more than a flash in the pan when it comes to breakout seasons. Throughout the league, there have been numerous players who have taken the next step towards stardom.

Despite being injured in a home plate collision over a week ago, Garver’s production for the first-place Twins has been one of the biggest surprises so far in the early MLB season.

Garver has been a part of the most productive catching duo in the league alongside fellow backstop Jason Castro. In 25 games, Garver has outproduced 2018 season in a quarter of the games. He has nine home runs and has driven in 19 runs, while hitting .329, with a .418 OBP, and a 1.164 OPS. Defensively, he’s still a work in progress, but he has improved posting a +1 defensive run saved after a -16 average in 2018. After throwing out 18 percent of base runners last season, he has thrown out 50% (2/4) so far.

It’s a small sample size, but Garver’s production — especially at the plate — has been a big boost for the Twins.

Vogelbach always showed decent power-hitting potential in the minors for both the Cubs and Mariners organizations, but in three small stints in the big leagues, his bat never transitioned to pro pitching. After earning a roster spot with the Mariners in Spring Training, Vogelbach has earned his stay with his long-ball hitting.

In 43 games, Vogelbach leads Seattle with 14 home runs and has 30 RBI, while hitting .258 and posting a .393 OBP and 1.021 OPS. He’s selective at the plate and hasn’t struck out a ton despite his gaudy power numbers. Whether Vogelbach can keep up those numbers over a full season remains to be seen, but the early returns are promising. He has earned an everyday spot in the Mariners lineup.

In his first full season of regular duty, the versatile infielder is in an unexpected breakout season largely thanks to taking on a more aggressive approach.

Lowe has been swinging for the fences in 2019; he ranks tied for second among second baseman with 10 home runs. He has driven in 28 runs, and has a .288 average, .335 OBP, and.879 OPS. The power spike has come with a big increase in strikeouts; after averaging a 25.7 strikeout percentage in 2018, that number has jumped to 35.3 percent in 2019. His walk rate has also dipped from 10.8 to 6.4 percent. Lowe is sporting a .400 BABIP, so his current production will dip as the season progresses. Still, that doesn’t take away from just how productive he’s been so far.

La Stellar entered 2019 with 10 career home runs in just under 400 games, and somehow, he has already outproduced that number in 44 games with the Angels.

The former Cubs utility man has been hitting the absolute hell out of the baseball for the Angels. In 44 games, La Stella has a career-high 12 home runs, along with 31 RBI, while batting .302 with a .374 OBP and a .950 OPS.  He has walked more than struck out (13/10), and has been somewhat unlucky swinging the bat with a .256 BAPIP. La Stella appears to be the real deal, and has shown to be more than a utility player. His fresh start with the Angels has been one of baseball’s best stories.

DeJong has already shown he can hit for power at the big league level with 44 home runs in his first two full seasons with the Cardinals. However, his lack of plate discipline prevented him from taking the next step towards stardom. In 2019, DeJong has evolved at the plate to become a much more complete player.

Paul DeJong with his 17th double of 2019, the most in the NL! 🔥 pic.twitter.com/XmyYxxVqTy

In 49 games, DeJong has hit eight home runs, with 26 RBI, a .311 batting average, a .407 OBP, and a .953 OPS. He has struck out just 35 times in 214 at-bats. That plate discipline has gone a long way to getting on base. DeJong is a plus defender at shortstop. His six-year extension worth a guaranteed $26 million looks like an absolute bargain for the Cardinals.

It might seem strange to put a player who has hit 40 home runs in back-to-back seasons on a list of breakout stars, but Gallo belongs.

In the last two seasons, Gallo was a low average, high home run player who walked at a solid clip, but not enough to offset barely scraping above the Mendoza Line. In 2019, Gallo is still striking out in nearly 35 percent of his at-bats, but he’s walking in nearly 20 percent of his at-bats, and benefiting from clubbing the ball at a career-best rate. Gallo ranks second in MLB with 15 home runs, while sporting a a .293 batting average and.426 OBP. His .687 slugging percentage and 1.113 OPS lead the AL.

Gallo’s numbers will dip, as maintaining a .406 BABIP all season is unlikely. However, Gallo is getting on base more and hitting the ball better than ever. That is good news for the Rangers and the outfielder’s future outlook.

German saw regular big-league duty in 2018, making 14 starts and appearing in 21 games to mixed results for the Yankees. While his 10.7 strikeouts per nine innings were impressive, German struggled to keep the ball in the park and was fairly hittable. In 2019, German has been flat-out awesome.

In 10 games (nine starts) German leads the league in wins with a 9-1 record, along with a sparkling 2.60 ERA, 3.12 FIP, and 0.97 WHIP. German’s strikeout rate is down to a still-impressive 9.3 K/9, and his control is improved as he has kept the ball in the park. His FIP suggests his season is not a fluke. German has never pitched more than 123.1 innings at any level, so how the Yankees manage his innings will be fascinating. Right now, he’s the best starter they have.

Yates was incredible in 2018, his second full season in San Diego. However, the closer has been absurdly good in 2019 warranting a mention on this list.

It’s no fun going through the Yates of hell. 🔥🔥🔥 #GotYourBack pic.twitter.com/zTkPXd2arU

Yates has been the best relief pitcher in the game with a dazzling 1.13 ERA, a league-leading 20 saves, a 0.67 FIP (!!!), and an incredible 16.5 K/9 in 24 games for San Diego. Yates should be an All-Star for the first time in his career. If he continues this pace, he’ll have an all-time great season from a relief pitcher. Not bad for a guy that was DFA’d back in 2017.