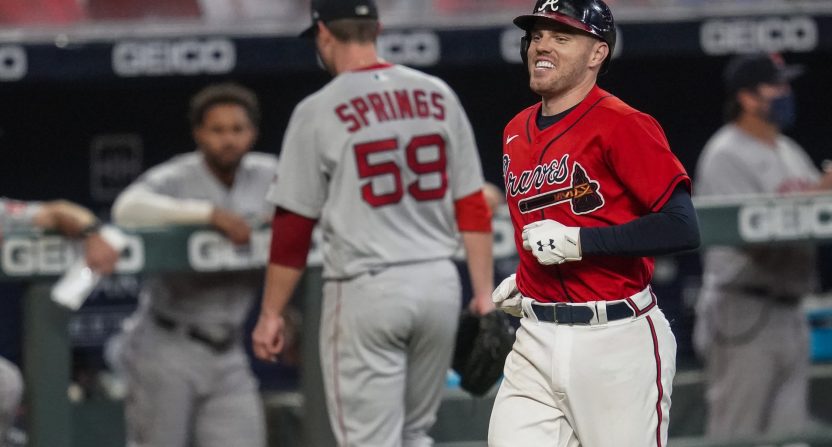 The two month, 60 game sprint of the 2020 MLB season came to a close on Sunday, and today is the weird one day break between the end of the regular season and the start of the playoffs. That means that it’s time for the annual awards column, breaking down the best (and worst) players in both the National and American Leagues. Here are our picks for MVP, Cy Young, and Rookie of the Year, as well as a note for the least valuable player and least value pitcher.

Weirdly, until the last week or two of the season, it seemed like no national MLB writer wanted to consider the possibility that Freddie Freeman was the MVP of the National League. Now that the season is over, the answer is clear: Freeman’s the guy. The Braves first baseman appeared in all 60 games for the NL East champions and slashed .341/.462/.640 with 13 homers, 51 runs scored, and 53 RBI. In those categories, he ranked second in all three triple slash categories (to Juan Soto of the Nationals, who didn’t even log 200 plate appearances on the season), first in runs scored, second in RBI (behind teammate Marcell Ozuna, who frequently drove Freeman in this year), and finished five homers back of Ozuna for the league lead.

If you want to make cases for Mookie Betts, Fernando Tatis Jr, or Manny Machado, fine – but you need to admit that all three (who had remarkably similar stat lines on the season, finishing with wOBAs of .390, .392, and .391 and the same 149 wRC+) had inferior seasons to that of Freeman, the league leader in fWAR (in addition to everything mentioned above).

Abreu’s .411 wOBA ranked tied for third in the league (with Nelson Cruz) behind LeMahieu and Ramirez, and his 167 wRC+ came in behind just LeMahieu. The main reason I’m dinging the Yankees infielder is because of playing time – missing ten games doesn’t seem like a huge deal, until you realize that is 17% of a 60 game season. It’s the equivalent of dinging a player for logging 135 games in a standard 162 game season. I think, like with Freeman in the NL, there’s value in such an important hitter appearing in the lineup every day. But if you prefer Ramirez over Abreu, I wouldn’t blame you.

Only 20 NL pitchers threw at least 60 innings, and that is crazy. Over 11 starts, Trevor Bauer of the Reds threw 73 innings, sixth in the league behind five pitchers who made either 12 or 13 starts. Bauer’s 1.73 ERA led the league by more than a quarter of the run over Yu Darvish of the Cubs, and his 100 strikeouts ranked second in the league to Jacob deGrom of the Mets. Though his win total of five seems low, only seven NL pitchers won more games (including Darvish), and over a full season, that’s probably a more respectable total of 14-16.

If you want to go with Darvish, who led NL pitchers in fWAR with 3.0 (Bauer was tied for third at 2.5), that’s cool. And for whatever it’s worth, I think this award had deGrom’s name on it until his final three starts when he allowed seven runs in 14 innings (striking out 25 and walking five, which is ludicrous). Those three starts added three-quarters of a run to his ERA for the year and probably doomed his chances. 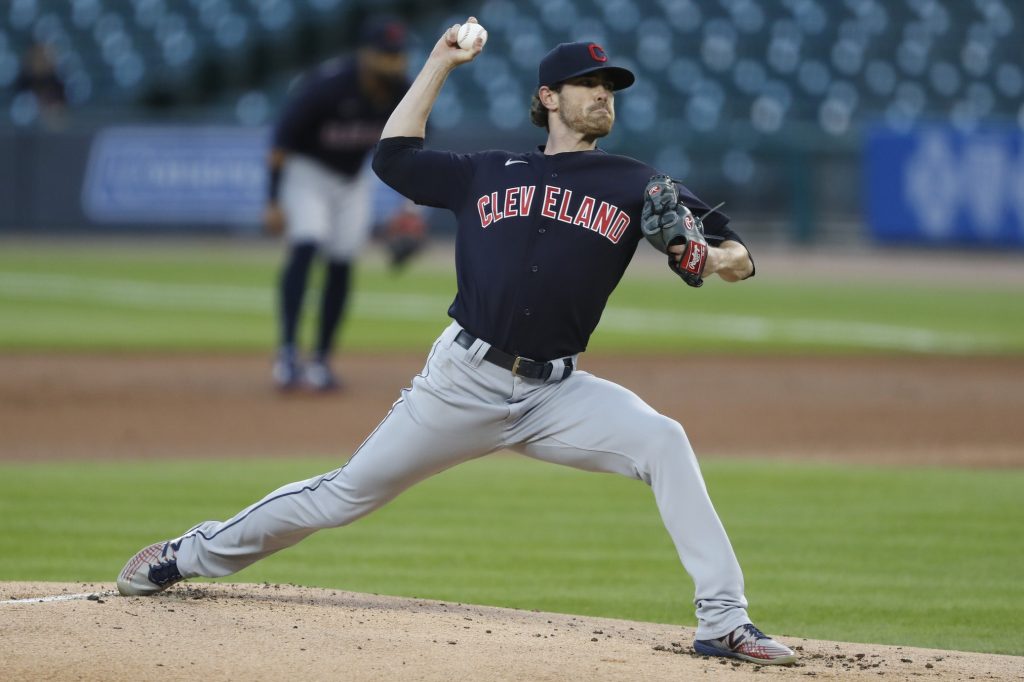 There’s not a case for anyone else in the American League. Bieber’s 3.2 fWAR was a full win ahead of any other American League pitcher (Zack Greinke and Kenta Maeda both finished with 2.1 fWAR). In addition to leading the league in fWAR, Bieber led the AL with eight wins (to just one loss), ERA (a shining 1.63 mark, more than a quarter run ahead of Dallas Keuchel in second at 1.99), and strikeouts (122, 25 ahead of second place Lucas Giolito). He only finished second in innings pitched with 77 1/3, thanks to league leader Lance Lynn of the Rangers getting an extra start.

We’re not going to really have a discussion for anyone else winning the award, but feel free to fill out the rest of your ballot with guys like Giolito, Keuchel, Hyun-Jin Ryu, and Dylan Bundy.

Ke’Bryan Hayes of the Pirates actually led NL rookies in fWAR at 1.6, but the dude didn’t even have 100 plate appearances in the majors this year. I’ll give the nod to Cronenworth, who finished second in fWAR across 53 games in San Diego, slashing .285/.354/.477. On the offensive side, Alec Bohm of the Phillies mashed (.338/.400/.481) over 44 games and 180 plate appearances, and only Mauricio Dubon of the Giants and Shogo Akiyama of the Reds notched at least 150 plate appearances (but neither hit very well at all).

Interestingly, there are a couple of decent candidates on the pitching side of the NL rookie class. Over nine appearances (eight starts), Tony Gonsolin of the Dodgers had a 2.31 ERA and 46 strikeouts in 46 2/3 innings. Brewers reliever Devin Williams allowed one run (!) in 27 innings, striking out 53 (!!) and walking just nine. Ian Anderson of the Braves and Kwang-hyun Kim of the Cardinals each had ERAs under 2.00 in 30+ innings. Cronenworth still gets the edge because of his overall impact, though.

There really isn’t a great crop of rookies in the AL to choose from. I’ll give Lewis the nod over Luis Robert of the White Sox. The Mariners outfielder played in 58 games and slashed .262/.364/.437 across 242 plate appearances. He also hit 11 homers, scored 37 runs, and drove in 28, ranking first, first, and second among AL rookies. Several players, including Sean Murphy, Willi Castro, Randy Arozarena, Ryan Mountcastle, and Bobby Dalbec, outhit the pair, but none recorded more than 140 plate appearances. Lewis had over 100 more, which is not insignificant over this short season.

There were only a couple of rookie pitchers of note in the AL. Lewis’ teammate Justus Sheffield had a 3.58 ERA over ten starts and 55 1/3 innings. Indians reliever James Karinchak had a 2.67 ERA over 27 innings, but his 53 strikeouts are what should raise your eyebrows. But in reality, Lewis is the only realistic choice.

Over 40 games for Colorado, Murphy hit .236/.275/.333 with three homers. Keep in mind, he played his home games in Denver, which traditionally favors hitters. His OPS at home was .720. On the road, it was a jarring .489. He’s in the second year of a two-year, $24 million deal, and the Rockies will surely decline their end of a mutual option for the 2021 season after Murphy contributed 16 homers and -1.0 fWAR over 176 games. Talk about a disastrous end to a disastrous contract.

Murphy wasn’t the only NL player to stink this year. Gregory Polanco of the Pirates (who is now 29, and seems like he’s been a budding star for the last five years) had a 42 wRC+ over 50 games. Pittsburgh also gave JT Riddle 69 plate appearances, and were rewarded with ten hits and a wRC+ of 4. Ender Inciarte got 131 plate appearances for the Braves and had a .233 wOBA. Scott Kingery’s wOBA over 124 plate appearances with the Phillies was .227. None of this is good at all. 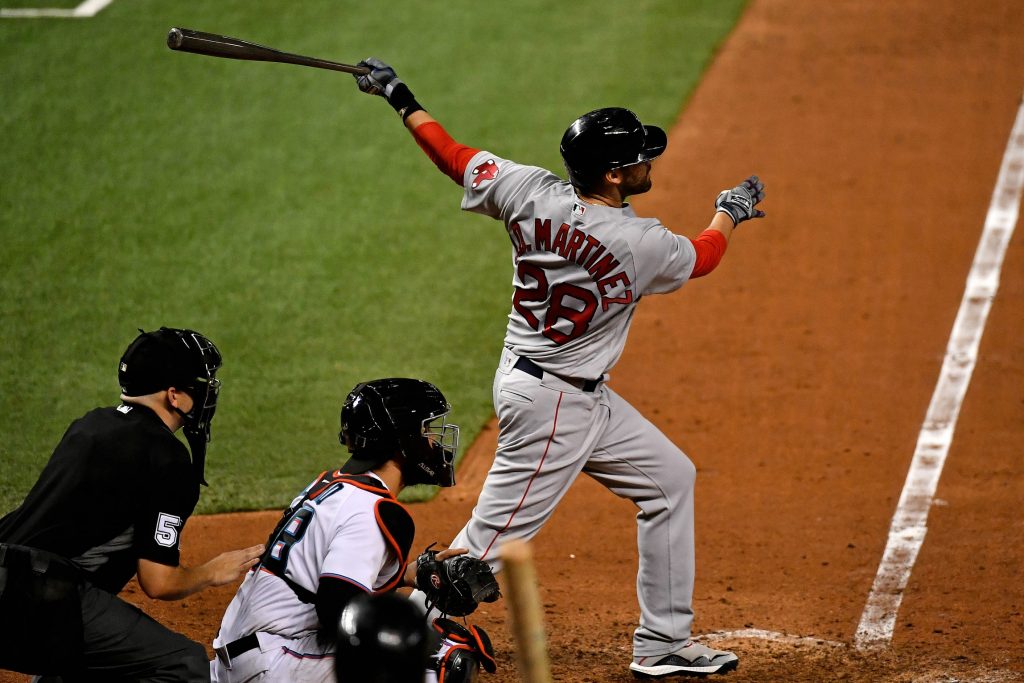 In year three of a five-year, $110 million contract, JD Martinez hit seven home runs over 54 games and slashed .213/.291/.389. Furthermore, he provided no value in the field at all, since he’s largely a DH (he played just 52 innings of defense in 2020). When you have a highly-paid designated *hitter* that doesn’t hit, you’ve got all the makings of an ugly situation. Martinez’s -1.0 fWAR was the second-worst of the season in baseball, and needless to say, he won’t be exercising his contract’s opt out clause following this season.

Matz has always had issues with health and consistency, and that was his 2020 in a nutshell. He missed some time with a shoulder injury, but when he was on the mound, Matz stunk. In six starts and three relief appearances, Matz had an ERA of 9.68, striking out 36, walking ten, and giving up a stunning 14 home runs. For the record, only two pitchers in baseball (Trevor Williams, Matt Boyd) allowed more homers than Matz, and they each threw at least 25 more innings than him. In reality, it was all downhill for Matz following his first start of the year against the Braves when he allowed one run on two hits in six innings. After that, it was batting practice for the rest of the Eastern divisions.

In other “this contract looks bad” news, Madison Bumgarner had an ERA of 6.48 in nine starts, the first year of a five-year, $85 million deal with the Diamondbacks. Touki Toussaint of the Braves (who is not highly paid) had an 8.88 ERA over 24 1/3 innings. Before his trade to the Blue Jays, Arizona’s Robbie Ray had a 7.84 ERA, 31 walks, and 43 strikeouts in 31 innings. And while I don’t want to pick on injured guys, Stephen Strasburg allowed six runs over five innings across two starts in 2020, the first year of his seven-year, $245 million contract. Now that’s a shitty return.

The 29-year old’s failure to succeed on his one-year, $9 million deal probably played a significant role in former Angels GM Billy Eppler losing his job this weekend. Teheran made nine starts and one relief appearance for Anaheim this year. He completed five innings just twice all year (and one of those was his relief appearance), and allowed less than three runs in just two appearances across the season. Over the season, he had a 10.05 ERA over 31 1/3 innings to go with 20 strikeouts, 16 walks, and a whopping 12 homers allowed. There’s no way to slice it – this was a truly terrible year for a guy who was once one of baseball’s top prospects.

In other disappointing performance news, Tanner Roark of the Blue Jays (year one of a two-year, $24 million deal) had a 6.80 ERA over 11 starts. Zack Godley of the Red Sox had an 8.16 ERA over eight games before landing on the DL with a flexor tendon strain. Brandon Bielak was forced into action for the injury-ravaged Astros, and pitched to a 6.75 ERA over six starts and six relief appearances.