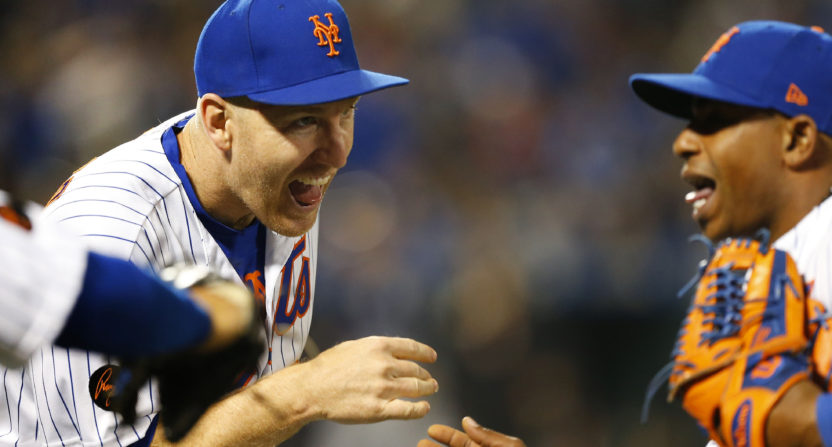 Through just 12 games of the 2018 season, the New York Mets are already 10 games over .500. The Mets beat the Milwaukee Brewers 6-5 on Friday night for their ninth straight win, giving them an MLB-best record of 11-1 in the early going.

The Mets have won nine straight, their longest streak since winning 11 in a row from April 12-23, 2015. They also won the pennant that season.

This probably goes without saying, but their 11-1 record is best in the Majors.

With the win and the Nationals’ 2-1 loss to the Rockies on Friday night, the Mets already have a six-game lead over the Nats in the NL East (and a 3.5-game lead).

Well, we’ve already seen a big change to those odds with the Mets’ incredible start (and the Nats’ underwhelming start).

The Mets’ win projection from FanGraphs is currently at 88.4 games, while it’s at 89.7 for the Nats. FanGraphs now gives the Mets a 68.7% chance at making the playoffs, or about a 24% increase since the season started.

That’s a massive, massive jump (and it’s not just a FanGraphs projection thinking these teams are pretty even now on paper; Baseball Prospectus will have the Mets even ahead of the Nats in their projections with their overnight update).

This may all seem a bit extreme so early into a 162-game season, where the talent usually wins out (as I talked more about in a very long post on the hot-start Pittsburgh Pirates this morning). But the Mets have already banked 11 wins, so their path to winning 90 games now would only require them to go 79-71, for example. That may be enough to win the NL East. To win a Wild Card slot, it may only take them winning in the mid-80s, or playing about .500 baseball the rest of the way.

And here’s the thing: the Mets are very talented. On paper, they’re a good team. Not a team that should be playing friggin’ .917 baseball, but a good team.

But the concern with the Mets of course is depending on their very talented arms — led by Noah Syndergaard and Jacob deGrom — to stay healthy. Injuries were a disaster for the Mets last season, when they won just 70 games.

If the starting rotation can stay relatively healthy this year (particularly with Syndergaard and deGrom, of course), there’s no reason New York can’t keep playing very good baseball. And they may not even have to play very good baseball over the remaining 150 games to be a playoff team. That’s the importance of their 11-1 start.