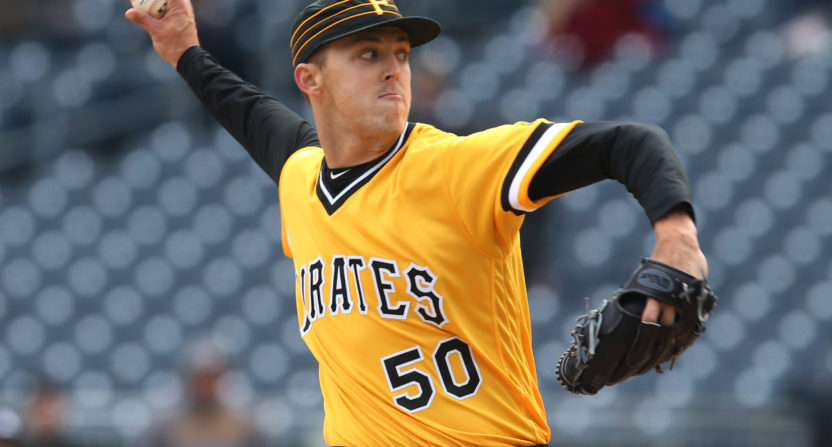 Naturally, baseball fans and evaluators have been trying to identify the potential surprise teams of 2018. The Phillies (now with Jake Arrieta, exciting young talent, and the resources to make July additions) and Athletics (underrated young talent, led by Matt Chapman and Matt Olson) were the two teams suggested most as potential surprises.

But through two weeks, the biggest surprise has been a team everybody assumed was going the opposite direction this year: the Pittsburgh Pirates.

Over the offseason, the Pirates traded two longtime stars in Andrew McCutchen and Gerrit Cole, signaling the beginning of a (new) rebuild. Well, here we are through 12 games of the Pirates’ season and they’re 9-3, with a 2.5-game lead in the NL Central. They just won a series over the Cubs at Wrigley Field, and have a three-game lead over Chicago (the division’s heavy favorite).

FanGraphs now projects the Pirates to win 81 games, a projection slightly higher than the Brewers, Giants, and Rockies. Would I tell you that *I* think the Pirates will be better than those teams? No, but the computers currently think so and they have a hell of a lot more information than I do. If you wonder if this is just a FanGraphs thing, Baseball Prospectus and ZiPS also had the Pirates at 80+ wins even before counting their win Thursday.

Still, it would likely take a lot to go right; there are 150 games remaining and Pittsburgh’s roster talent doesn’t look all that great on paper. Over 162 games, roster talent usually wins out. So to be clear, I’d guess that the Pirates come back to earth eventually and aren’t a serious playoff contender. But it’s certainly *possible* they could hang in the race, and here are five reasons/ways that could lead to them getting it done.

We’ll start with the obvious one (aside from “baseball is weird”): They’ve already won nine of 12 games and that’s fairly meaningful

The argument against this is, “Well, just about every team (except the Marlins) is going to have a 12-game stretch like this over the season.” And yeah, that’s probably true.

But there’s something a little extra valuable to starting like this, right? Right now, the players are confident when they step onto the field, into the batter’s box, onto the mound. With the hot start, Clint Hurdle will be managing to win games, rather than potentially treating the roster like the rebuilding (bad) team we thought they’d be. And if the team can stay competitive into July, maybe the front office decides to make an addition or two to improve their roster. You could argue that wouldn’t be in their best interest, but if the team is hanging around in July, who knows?

But the wins the Pirates have banked do matter. Since Opening Day, the Pirates’ playoff odds on FanGraphs have already more than doubled, going from 8.8% to 18.4%.

From 2013 to 2016, Starling Marte averaged 5.0 WAR. Last year, he was suspended 80 games for PEDs and didn’t look like the Marte of old when he returned. (He put together a career-worst .712 OPS over 77 games.) Will he ever be the same player as his star seasons? That seems unlikely, but there’s reason to believe the 29-year-old can still be a very good player, and he’s off to a nice start in 2018 (six extra-base hits, seven walks, and three stolen bases).

Then there’s Gregory Polanco, a player we’ve been waiting to break out since he entered the league in 2014. Polanco is an imposing figure at 6-foot-5, 235 pounds, and he’s still just 26 years old. If these 12 games are any indication, it appears his breakout season may have arrived.

That 440-ft bomb for Gregory Polanco is the third-longest HR he's had tracked since 2015. Maybe training like you're Bane crossed with Omega Red all offseason has its benefits. (image from @stephenjnesbitt) pic.twitter.com/mV8Jnp7kYs

Polanco is crushing the ball to all fields and his swing looks better than ever. He leads the majors with 15 RBI, and his .714 slugging percentage ranks behind only Didi Gregorius. Polanco has the upside to be a full-on superstar, but if he could even be just a 3+ WAR player, it would greatly help the Pirates’ chances this year.

Jameson Taillon can be an ace, and so far he’s looked like one

While the Pirates will surely miss Gerrit Cole, they may still have an ace in Jameson Taillon. The 26-year-old right-hander has a 3.51 FIP in 45 career starts, and he’s looked fantastic in his two starts so far this season. Over 14 1/3 innings, Taillon has allowed just two earned runs, five hits and two walks, while striking out 16.

My biggest surprise pitcher so far is Jameson Taillon for the @Pirates This year I have seen him expand, his fastball picked up more velocity, he’s more relaxed and mature as a pitcher

The pitching staff as a whole can be a solid unit, especially if Joe Musgrove returns sooner than later

The Pirates have two clear studs on their staff in Taillon and fireballing lefty closer Felipe Vazquez (the artist formerly known as Felipe Rivero). After that, nobody really jumps out at you, but it’s really not a bad group.

Ivan Nova is a fine veteran starter who should give them 2-WAR production. Chad Kuhl is a 25-year-old with a fastball that touches 97 mph who gave them 2-WAR last year; he has the upside to take a step forward. And Trevor Williams is a 25-year-old coming off a 2-WAR season, and has a 1.56 ERA so far in three starts.

Then there’s Joe Musgrove, who the Pirates acquired from the world champion Astros in the Gerrit Cole trade. Musgrove — yet another 25-year-old right-hander — is a very intriguing arm with a variety of pitches, as you can see here:

Musgrove bounced back and forth between starting and relieving for the Astros, but should get the chance to work exclusively as a starter for Pittsburgh. The problem is that he’s currently out with a shoulder injury, and reports on Thursday were that he’s still not throwing off a mound. Any scenario in which the Pirates hang in the race likely involves Musgrove being an important contributor, so they need him healthy and making starts for the big-league club in the coming weeks.

This goes back to the first reason we looked at; the Pirates can play .500 ball the rest of the way and win 84 games. It’s entirely possible it doesn’t take more than 85 wins to get one of the two NL Wild Card slots. The Mets look awesome (10-1) so far, but even their fans will tell you to not get too confident yet with the uncertainty of how their starting rotation will hold up health-wise.

The FanGraphs projections think the Cardinals would be next up at 86 wins (which sounds about right), but they look pretty mediocre so far and with some clear flaws. The D-Backs are playing well (9-3), but would you confidently predict they win over 85 or so right now?

Odds are that one or two of these teams — or the Rockies, Brewers, Giants, Phillies — exceed expectations (and/or upgrade their rosters at the trade deadline). But right now, these teams don’t look all that scary, and we’re talking two playoff slots.

It’s correct to remain very skeptical of the Pirates and their chances to make a serious run at a Wild Card slot, but you can at least see their path to it — even if you may have to squint.

Their schedule is pretty weak on paper over the next several weeks (of course, if they’re actually the team we expected, every game will be really tough), but we’ll learn a lot more about them by June 13. That will be when they finish up a 19-game stretch against the Cardinals (seven games), Cubs (six games), Dodgers (three games), and Diamondbacks (three games).

If they still have a .500+ record or better after that stretch, then maybe they’re worth taking seriously.