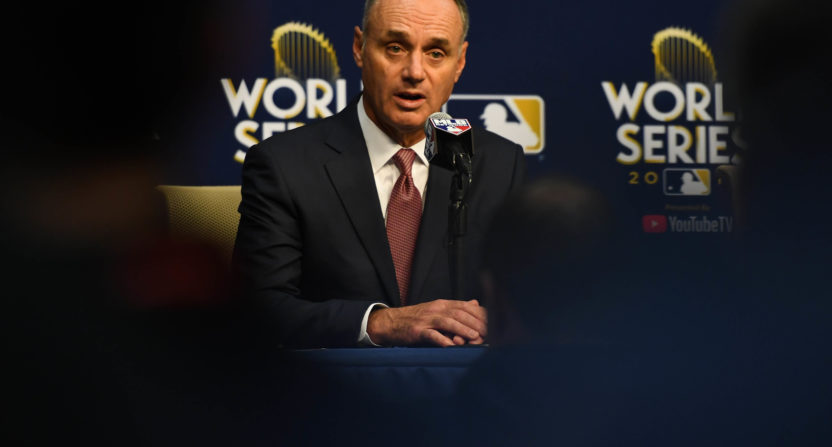 On Tuesday, all the various viewpoints clashed as baseball’s power players took their war of words to the next level.

The drama started Tuesday when MLBPA executive director Tony Clark released a statement accusing teams of being in a “race to the bottom” (referring to the high number of teams apparently ambivalent about short-term success) and that the owners’ reluctance to sign players “is a fundamental breach of the trust between a team and its fans and threatens the very integrity of the game.”

The statement was Clark’s strongest yet about current free agents’ ongoing dilemma.  It was so strong, in fact, that the league office felt the need to respond, writing (falsely) that owners care only about winning and blaming the stagnant offseason entirely on agents who were unwilling to accept nine-figure offers on behalf of their clients.

And because Scott Boras has never seen a verbal sparring match he wasn’t willing to end, the super-agent weighed in Tuesday night, questioning how the league would even know that players have nine-figure contract offers. Via Jon Heyman of FanRag:

“I find it interesting that the league office can state as fact that the age free agents have ‘nine figure’ offers since the CBA mandates that teams not share that sort of information,”

“I am also curious how a public statement communicated to all teams about offers on the table and players demanding too much money, from a central office that oversees, coordinates with and represents the 30 teams, is any different than the infamous ‘information bank’ in the 1980s,” Boras said.

Per Heyman, MLB deputy commissioner Dan Halem then clapped back that, “If Mr. Boras spent as much time working on getting his players signed as he does issuing inflammatory and unsubstantiated statements to the press, perhaps the events of this off-season would be different.”

Boras reportedly responded, “So he did not deny the point.”

Obviously a lot of the response on all sides here is just bluster meant to tilt the public’s sympathies in one direction or another. There’s both truth and deception in all the statements above. But for the league to deny that more teams than ever are focused on goals other than winning is dishonest, and for it to claim categorically that profit is never a factor in owners’ decisions is absolutely preposterous. The fact is, a lot of franchises are not interested in spending right now.

If the league sticks to its current position, while the players continue to demand owners open their wallets, a nasty war of words could get even nastier as Spring Training approaches.