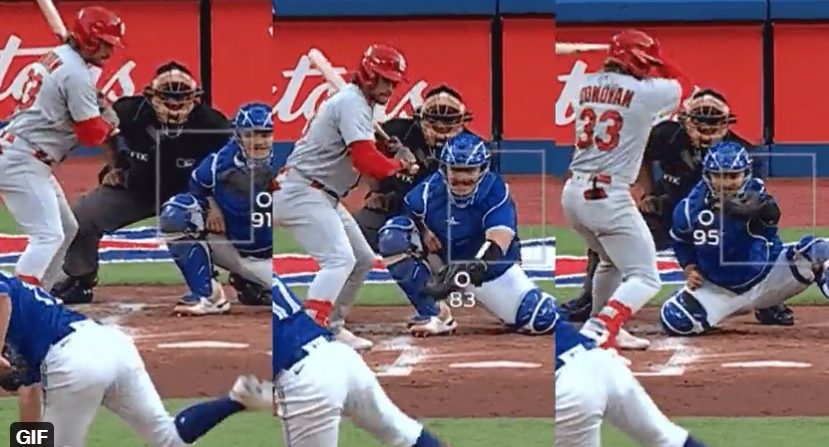 During his at-bat in the second inning of Tuesday’s game against the Toronto Blue Jays, St. Louis Cardinals third baseman Brendan Donovan struck out looking.

In and of itself, that isn’t particularly noteworthy. The way it happened, though, was.

Pitcher José Berríos struck Donovan out on five pitches, with all three of the strikes being called strikes by home plate umpire Laz Díaz. There was one problem, though. None of the called strikes were actually in the strike zone.

Another look at the sequence paints an even worse picture, as the only pitch of the at-bat that was actually in the strike zone was called a ball.

MLB umpires have been a hot topic of conversation all season. So, it should come as no surprise that this sequence of missed calls got the attention of the MLB world.

Umps trying to get home for dinner pic.twitter.com/nyGCYuPYSK

This ump has postgame plans 😂pic.twitter.com/WWAhoxHAFH

Sadly, this is not the first time that we’ve seen such missed calls this year.

Any defense of Díaz probably starts with the fact that none of these calls were that bad. All had a high combination of break and velocity from Berríos and were excellently framed by Alejandro Kirk.

That’s all true. And if this was a matter of one call, it wouldn’t be much of an issue. But this isn’t one call, it’s three. Making matters worse is that the three pitches missed on different sides of the plate. So, it’s not as though Díaz has a particular eye for inside, outside, high or low pitches. If he’s calling all three of these misses as strikes, the hitter doesn’t stand a chance.

One of the particular ironies here is that Díaz has been outspoken against critics of umpires this season. This won’t do anything to quiet his critics, nor will it quell the call for robot umpires.

If anything, the fact that none of these calls were that bad on their own is a sign that robot umpires should be more strongly considered. Pitchers may just be throwing too hard and with too much movement now for umpires to keep up. That certainly seemed to be the case with Díaz on Tuesday.