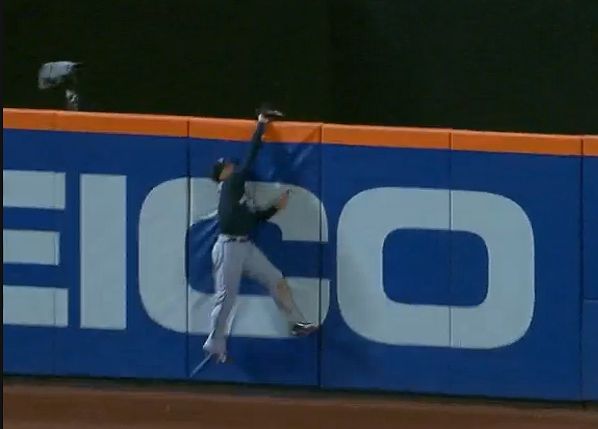 The New York Mets, St. Louis Cardinals, and San Francisco Giants entered Wednesday in a three-way tie for two NL Wild Card spots (as I covered in The Cheat Sheet this morning, but I know you already read that!).

It looks like they all may remained tied after play on Wednesday, as the Cardinals got shellacked 11-1 by the Colorado Rockies, the Giants are losing 5-2 to the Los Angeles Dodgers at the time of this post, and the Mets… well the Mets lost in very heartbreaking fashion to the Atlanta Braves. The Mets led 3-0 through six innings, but found themselves trailing 4-3 in the bottom of the ninth. And it appeared they were still going to pull out a win, as with two on and two outs, Mets slugger Yoenis Cespedes crushed a Jim Johnson fastball to deep right-center field.

But Atlanta’s Ender Inciarte had other ideas, and made what may be the catch of the year to rob Cespedes of a homer, and rob the Mets of what would’ve been a big boost to their playoff chances:

MLB play of the year nominee by Ender Inciarte: Takes a three-run homer away from Cespedes for the final out of the game.

That’s one hell of a way to end a baseball game. Absolutely incredible play by Inciarte, one of the very valuable pieces the Braves got back from the Diamondbacks in that laughable “Shelby Miller trade” over the offseason.

What makes this loss even more annoying to the Mets is, well, it came against the NL-worst Braves. So did the previous two games, which the Mets also lost.

The #Mets getting swept at home by the #Braves – again – just can’t happen in a pennant race. Shouldn’t come down to that catch by Inciarte.

This NL Wild Card race is just three teams stumbling to the finish line, and may end with the two Wild Card teams having under 85 wins at this pace.