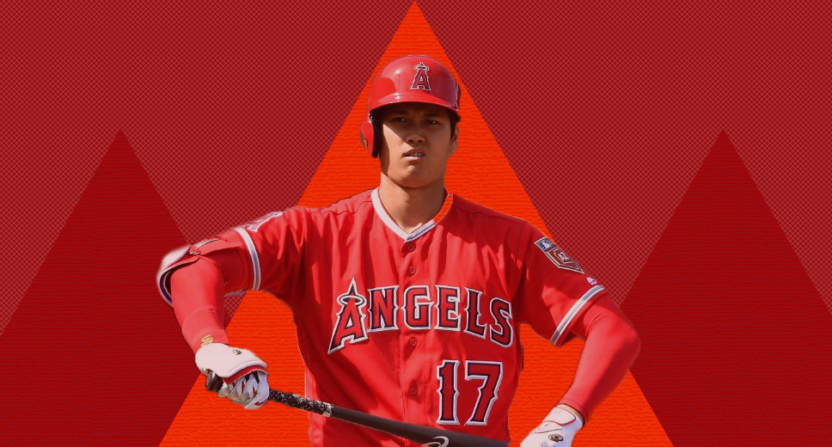 Shohei Ohtani’s first two weeks in the major leagues have gone about as well as anyone could have imagined. The 23-year-old Japanese star is 2-0 with a 2.08 ERA and 18 strikeouts in 13 innings, while batting .364/.417/.773 with three home runs in 22 at-bats. In mere days, he has captured the attention and admiration of baseball fans and non-baseball fans alike.

But what now? Surely, Ohtani can’t actually be one of the best hitters and pitchers in baseball… right?

We asked our writers to project what kind of numbers Ohtani will generate over the rest of the season. Here’s what they came up with:

Alex Putterman: I’m trying as hard as I possibly can not to overreact to Ohtani’s remarkable start. Coming into this season (at least before his awful Spring Training), the rap was that he was a sure thing as a pitcher and a question mark as a hitter. His fast start has provided proof of concept for his skills on both sides of the ball, but a few games shouldn’t drastically change the projection.

With that in mind, I see Ohtani as an All-Star level pitcher but one who won’t make enough starts to fully maximize his value on the mound. Maybe something like 140 innings over 24 starts with a 3.42 ERA and about a strikeout per inning. That would likely come out to about 3 WAR for the season.

At the plate, I’m more pessimistic, in part because I wonder whether the Angels will stick to the plan of DHing Ohtani three times a week once he starts picking up bumps and bruises and his performance slips either at the plate or on the mound. I’ll say he posts a .260/.320/.480 line with 18 home runs in 260 at-bats, which would make him an above-average hitter and (despite the positional adjustment for a DH) provide about 1.5 WAR of value.

Roll that together and you’ve got a 4.5 WAR player — a weapon more valuable than NL Rookie of the Year Cody Bellinger was last season. Pretty damn good.

Ian Casselberry:  I already feel a bit dumb for being dismissive of Ohtani based on his spring training performance. I certainly bought into the idea that he had major adjustments to make with breaking balls and being pitched inside, that he might begin the season as only a pitcher with the Angels. Didn’t take long to get that one wrong! Ohtani is flat-out hitting the ball hard. He’s not just running into something he can hit.

However, Ohtani will probably be most valuable to the Angels as a pitcher. He has a four-pitch arsenal, can locate his fastball well and has what looks like a nasty out pitch with his split-finger.

I do think that pitchers could figure Ohtani out at some point, but that pitching repertoire could stick. I admit I’m kind of just throwing numbers out there, but a .270 average with a .840 OPS and 25 homers seem reasonable. On the pitching side, maybe 12 wins with an ERA under 4.00 (let’s say 3.60), and more than 10 strikeouts (how about 11) per nine innings. Taking all of that into consideration, a WAR of 5.0 or above certainly appears to be attainable. Hell, that might be projecting too low!

Joe Lucia:  I think Ohtani’s success this season will be understandably limited by circumstances out of his control. Will the team manage to keep the six-man rotation alive? Will Ohtani still DH three days a week, or will injuries to the Angels offense force regular starters into the DH role? Will the lack of playing time stall momentum?

Despite all of that, I think he’ll still end up as a four-win player this season, which is nothing to sneeze at and probably makes him the favorite for AL Rookie of the Year.

Andrew Bucholtz:  There’s a whole lot of uncertainty over just where Ohtani will wind up, especially on the batting front. The Ringer’s Zach Kram notes that the Steamer projection system (which makes significant adjustments based on in-season data and considers Statcast data, especially exit velocity) estimates Ohtani will be a top-six pitcher and a top-25 hitter this year, and may post rookie seasons comparable to Kris Bryant and Noah Syndergaard. Other projection systems (PECOTA and ZiPS) aren’t quite as bullish but are still quite high on Ohtani as a pitcher in particular.

However, I tend to lean more towards the conservative projections, to think Ohtani is more likely to excel long-term in his results from the mound versus his results at the plate, and to think his stats may trend down a bit as other MLB players become more used to him.

Still, his batting results so far have certainly been incredible, and it’s hard to mark him down based on what we’ve seen to date (especially when you consider solid underlying numbers in batting exit velocity and pitching fastball velocity). I think we’ll get Ohtani as an All-Star on the pitching side, as a top-25 pitcher by the end of the year, and as a top-100 hitter, and that all would be pretty amazing. But it’s possible he could do even better than that.