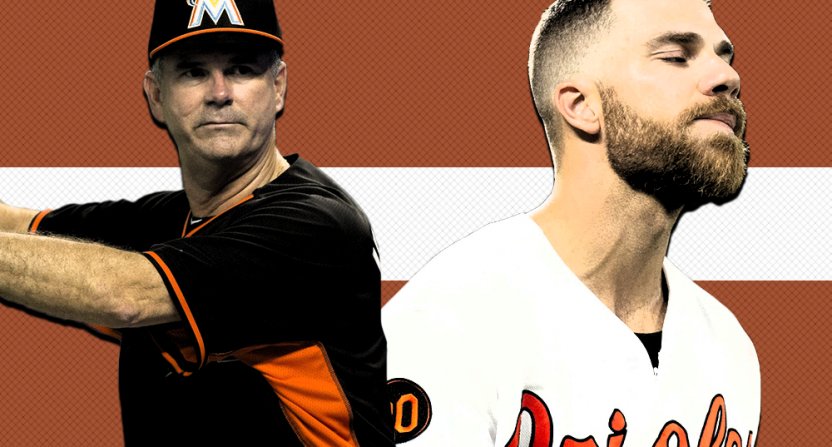 As Major League Baseball teams pass the 1/3 mark of their seasons, it’s becoming clearer which teams are contenders and which teams are pretenders. Teams that will end the season with the worst records are also becoming more obvious. While the Seattle Mariners, San Francisco Giants, and Washington Nationals have had dismal seasons and rank among the bottom-tier of performers this season, there are five teams in worse shape.

The Tigers have the most wins among any team on this list, but thanks to a powerless lineup, their fortunes this season don’t look great.

Detroit ranks last in the AL with just 51 home runs on the season. No single player on the Tigers has more than six home runs. The team has a .375 slugging percentage, and no single player personifies their light-hitting more than longtime star Miguel Cabrera. The 36-year-old has clearly seen better days and is no doubt in the closing stage of his career. Miggy has swatted just two home runs and 10 total extra-base hits. However, his .284 average and .356 OBP actually lead the team.

The Tigers’ rotation — led by Matthew Boyd and Spencer Turnbull — has been mostly fine, but the bullpen has been a huge problem, allowing a 5.13 ERA and .265 average against, while striking out just 179 batters in 205.1 innings. The team’s pitching should be able to keep the Tigers from falling into the 100-loss category by season’s end, but the club’s batting will keep it close.

The good news for Blue Jays fans is the prospect pool starring Vladimir Guererro Jr., Cavan Biggio, and Lourdes Gurriel Jr. has made its way to the Show. The bad news? Practically everything else. The Jays are the second-lowest scoring team in the AL, averaging just 3.74 runs while allowing more than 4.8 runs per game against.

Toronto’s offense is a mess.  Eric Sogard leads the team with a .260 batting average and is the only regular above the .250 mark. Meanwhile, nearly half the players, including starters Rowdy Tellez, Randal Grischuk, and Danny Jansen are floating around the Mendoza line. The Blue Jays’ .219 team average and .285 OBP ranks dead-last in the league. It’s hard to win games when you don’t get on base.

The pitching staff is in equally poor shape. Aside from Marcus Stroman (who is enjoying a bounce-back season after a rough 2018), the Toronto starting rotation has been terrible. Toronto starters have struggled to get past the fifth inning, and have delivered just 18 quality starts all season. Aaron Sanchez has been okay, but behind the top two starters, there’s a gaping hole in talent. There are no reinforcements on their way through the minors either. The bullpen, led by superb closer Ken Giles (1.19 ERA, 1.12 FIP), has been solid but overtaxed. Toronto has survived this far in the season with a lackluster staff, and it’s hard to see things suddenly getting better as the season progresses.

Derek Jeter and the Marlins’ front office have ravaged the roster to the point where it’s genuinely surprising they have won 23 games this season. The team lacks any star power and fields a roster that will be lucky to win 62+ games over the course of the 2019 season.

Marlins hitters rank dead last leaguewide with just 43 home runs, to go with a .233 AVG, .293 OBP, and a league-worst (by far) .341 SLG. Only three players have more than five home runs on the season. Miguel Rogas has ZERO after 11 last season. Outside of Jorge Alfaro, Brian Anderson, and veteran Neil Walker, Miami has no batters that opposing pitchers should worry about. They have a truly an embarrassing lineup.

Miami’s pitching has saved the team from taking the top spot on this list. Marlins starters have actually been somewhat impressive, with Trevor Richards and Caleb Smith turning in fantastic starts to the season. Miami’s problem is the relievers. The Marlins rank third-last in the majors with a 5.27 bullpen ERA, while allowing a .253 batting average against. It’s a shame the bullpen isn’t on the same level performance-wise as the rotation. Otherwise, the Miami pitching staff would look a lot better. Unfortunately, the lack of power, lack of star power, and lack of good bullpen arms puts a dent in what could be an okay season.

The Royals are in a weird place, where they have some quality producers in their batting lineup, but outside the top hitters, it’s a real mess.

Whit Merrifield, Adalberto Mondesi, Jorge Soler (at least power-wise), Hunter Dozier, and Alex Gordon have remained largely productive for the Royals. However, it’s a dramatically steep drop-off following them. Kansas City has allotted regular playing time to Ryan O’Hearn (.198 average), Martin Maldonado (.211), and Chris Owings (.133!!). The bottom of the lineup (which has changed as the season progressed) might be the easiest outs in all of baseball.

The Royals’ pitching is substandard. Danny Duffy and Brad Keller have been alright, while Jakob Junis has been consistently mediocre. The real problem is the backend of the rotation. Homer Bailey (-0.2 WAR) and Jorge Lopez (-0.8) have combined for 12 losses. Meanwhile, the Royals’ bullpen has been below average with a 4.78 ERA, recording just six saves all season.

Kansas City is destined for its second consecutive 100-loss season.

Nobody expected the rebuilding Orioles to resemble a competent team, and so far, they have been just as bad as one would guess entering 2019.

Baltimore pitching has been horrendous, ranking dead-last in MLB with a putrid 5.75 ERA. The starting rotation and bullpen have been equally mediocre. Dylan Bundy leads the starters with a 4.58 ERA. The group has delivered a 29th-ranked 12 quality starts. The bullpen’s 5.84 ERA ranks second-last in the majors. Baltimore’s pitching staff has been continually lit up, allowing a league-leading 2.11 home runs against per game.

The hitting has also struggled greatly. While Renato Núñez has enjoyed a breakout season and will likely be the Orioles’ All-Star representative, the rest of Baltimore’s hitters have been subpar. Collectively, the team is hitting .237 and getting on base at a .297 clip. The O’s have mashed some home runs thanks to Nunez, Trey Mancini, and Dwight Smith Jr., but that hasn’t been enough to cover up the poor hitting. The Orioles are who we thought they were: a team not ready to contend, but rebuild at the cost of MLB success. At least Chris Davis is not historically bad! (he’s still quite bad).