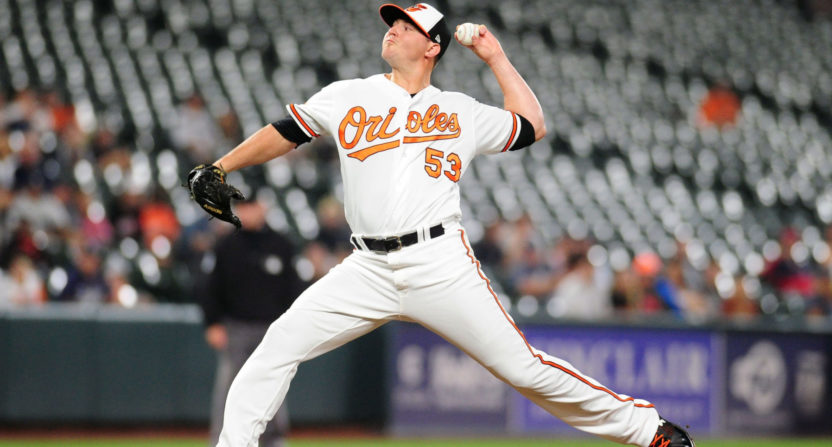 The New York Yankees’ bullpen was already posting the best numbers in baseball, and it just got even better. The Yankees agreed to a deal for Baltimore Orioles’ closer Zach Britton Tuesday night in a deal first broken by Fancred’s Jon Heyman, sending minor league pitchers Dillon Tate, Josh Rogers and Cody Carroll the other way. Britton will join a bullpen that already features the likes of Aroldis Chapman, Dellin Betances, and David Robertson, and one that holds the best ERA (2.75) and strikeout (448) numbers in MLB. And with Chapman, Betances and Britton, the Yankees have a rare collection of relievers who already have over 130 career saves, something that hasn’t been done since 2004:

The last team to have 3 pitchers with 130+ career saves at the same time was the 2004 Phillies (Roberto Hernandez, Billy Wagner, Todd Jones)

But the Yankees themselves had a similar  collection a year earlier:

At any rate, this looks like a deal that could further solidify an already-impressive Yankee bullpen. The 30-year-old Britton could be great if he hits his top form; in 2016, he was almost unhittable, going 47-for-47 in save opportunities, posting a 0.54 ERA and finishing fourth in the AL Cy Young Award balloting. However, Britton has faced some injury issues over the past two seasons, including a ruptured Achilles tendon in December. And he’s only appeared in 16 games this year (since making his 2018 debut June 12). But he’s looked pretty good there, posting a 3.45 ERA with 13 strikeouts across 15.2 innings of work. And this deal won’t hurt the Yankees immediately even if Britton struggles, as they only sent minor-leaguers the other way.

Of course, this move could still come back to haunt the Yankees if one of those dealt players turns into a star. The likeliest candidate there may be Tate, who was picked fourth overall by the Texas Rangers in the 2015 draft and later sent to New York in the Carlos Beltran trade. The 24-year old right-hander is 5-2 with a 3.38 ERA in 15 starts for Double-A Trenton this year, and ESPN’s Keith Law ranked him as the Yankees’ eighth-best prospect ahead of this season. Meanwhile, 24-year-old lefty Rogers was chosen in the 11th round of that draft and is 6-8 with a 3.95 ERA in 19 starts with Triple-A Scranton this year, while 25-year-old Carroll was drafted in the 22nd round (also in 2015) and has nine saves and a 2.81 ERA in 32 relief appearances for Scranton this season.

So there might be some potential there that could help the Orioles’ rebuild, and the Yankees only have Britton for half a season; he’s a free agent after the year. But they didn’t give up any MLB players or any of their utmost top prospects, and they not only improved their own already-dominant bullpen, they kept rivals like the Boston Red Sox and Houston Astros (who were also reportedly in talks for Britton, along with the Chicago Cubs) from adding some top relief help. We’ll see if that’s worth it in the end, but it certainly seems like a reasonable gamble.