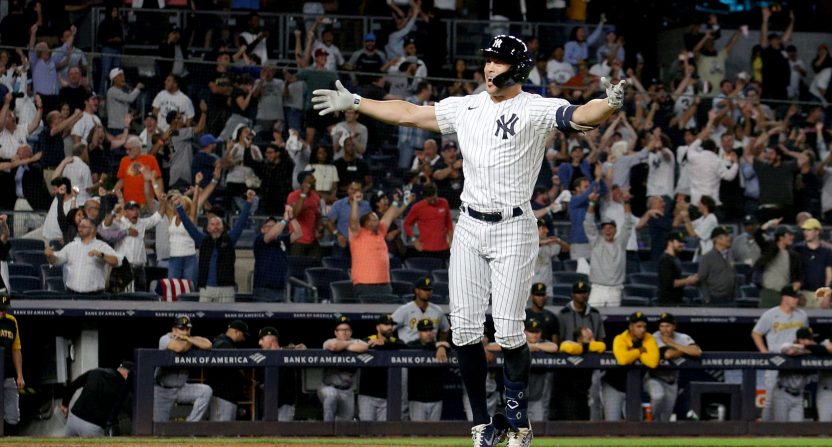 Even for the New York Yankees’ storied franchise, Tuesday night will go down as an unforgettable one for the Yankees and their fan base.

First, Aaron Judge crushed his 60th home run of the season, tying Babe Ruth for second all-time in American League history. That trails only Roger Maris, who hit 61 homers for the Yankees in 1961.

The Judge home run led off the ninth inning, but it still left the Yankees trailing the Pittsburgh Pirates 8-5.

Well, the Yankees loaded the bases with no outs, and another monstrous slugger came to the plate in the form of Giancarlo Stanton. And Stanton hit a walk-off grand slam to give the Yankees an incredible 9-8 comeback victory:

What’s also insane is that it’s the third time Stanton has hit a walk-off grand slam in his career. He’s only the fourth player in major-league history to do that.

It’s also the fourth walk-off grand slam when trailing by three in Yankees history- and it’s the second time they’ve done it this season!

Giancarlo Stanton is the 4th player in MLB history to hit 3 walk-off grand slams in a career.

His walk-off grand slam is the 4th in Yankees history when down by 3 and the 2nd one this season. pic.twitter.com/pYHNeOWyuJ

Here’s a look at how the baseball world is reacting to Stanton hitting a walk-off grand slam to cap off a crazy, historic ninth inning for the New York Yankees (and another heartbreaking night for the lowly Pittsburgh Pirates):

Giancarlo Stanton just hit a walk-off grand slam on the night Aaron Judge hit his 60th home run and Yankee Stadium is going absolutely wild. They drop a five-spot in the ninth to stun the Pirates, 9-8. Wow.

Giancarlo Stanton was asked on the Jumbotron about Aaron Judge’s 60th home run.

Stanton goes, “and he’s not done…”

Camera cuts to Judge in the dugout.